The Epic Karbo GTX has been discontinued. If you're looking for something new, check out the best mountaineering boots for 2021. 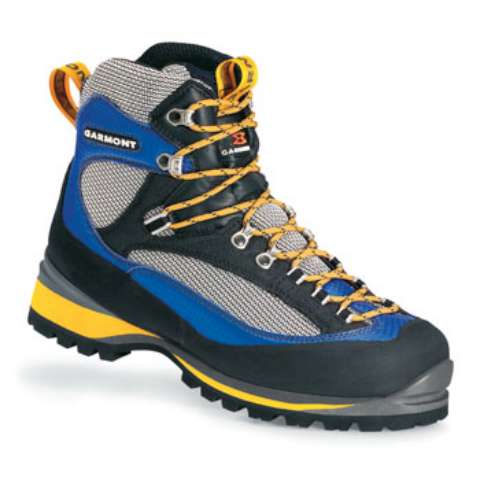 On the positive side: The boots are very light, but still rigid, and well suited for crampons. They are relatively narrow, which makes them a perfect fit on my extremely narrow heels. I had an extremely positive feeling in the boots when moving upwards, both over snow / ice and over rocks.

On the negative side: The boots take a long time to dry once they get wet. And now the real downside: The boots seem to have a faulty design for moving downwards. Actually, when going down quickly, I had several instances when one foot was twisted outwards. At some occasion it happened with such a force that I twisted my ankle. After the tour was over I went to the doctor, who sent me to an orthopedic shoemaker. The shoemaker diagnosed immediately the shoes are wrongly designed: They are getting more and more narrow towards the sole of the shoe, producing a kind of "high heel effect". The shoemaker demonstrated to me in an effectful way how easily the shoes get twisted, also in comparison to other mountaineering boots.

I think it's a shame and very dangerous that a mountaineering boot from the well known Garmont brand has such a design flaw. Has any one else had similar problems?

I had to stop my mountaineering vacations due to the damaged ankle. And by the way: According to some research over the phone and Web, it seems that this boot is out of market already (at least in Europe). Maybe connected to these problems?

I'm fortunate enough to have only paid 270 NZD for these boots which are not normally sold in NZ.

I've been using them for about two months now mainly on Mt Ruapheu In NZ north Island. They have been great for ice climbing with an really stiff sole from the carbon fibre shank. Really good for post and pigeon holing in all hardness of snow.

However the cuff has taken a bit of a battering from rubbing on my gaiters and is looking a little frayed. The Vibram sole gives good grip on snow and the Gore-tex liner has lept my feet dry, however the lack of insulation makes for cold toes if stood instructing for any length of time.

The boots take crampons well and the rubber rand shrugs off rocks and crampon points. Impressively stiff nice and light.

But a bit chilly to stand around in.

Materials: these boots have never seen a cow pretty much all moden synthetic materials
Use: instructing in snow and ice
Break-in Period: none great straigt out of the box
Weight: nice and light
Price Paid: 270 NZD