The Men's Blizzard has been discontinued. It was replaced by the Garneau Blizzard II.

If you're looking for something new, check out the best backcountry snowshoes for 2020. 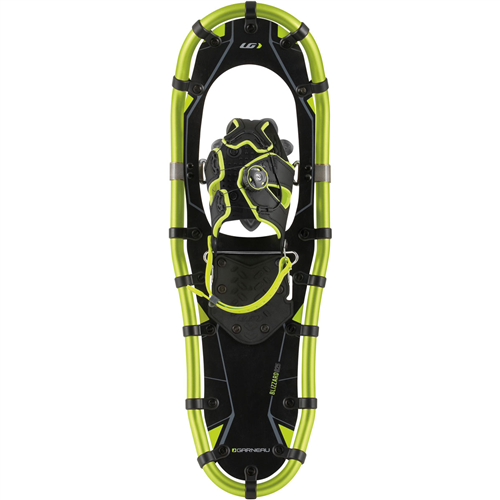 I wish I could truly review mine, but in the middle of the most snowless winter I probably have lived through I cannot. We have no snow and haven't had more than two inches of same this season.

I can say I have a brand new pair of 10x36's bought late last spring and they look great and they appear to be tough as bullhide, but I do not know. They do measure almost an inch over 36.

I did pay $94 for mine on a Sierra Trading Post closeout. And I look forward to trying the BOA system. They did come in a carrying bag, which has a shoulder strap and Velcro straps for carrying poles.

I gave four stars because of Garneau's reputation, and by the looks of the construction of these shoes using my own experience with many other snowshoes. I'll change that rating accordingly if need be if it ever snows. They well may be 5 star.

I wouldn't mind seeing small side bars near the tail to help prevent rear side sliding. They wouldn't effect glissading.

I finally got these out today in a foot plus of snow [edited to note: we actually received 27 inches]. Walked through 3-foot drifts when possible and slush also. Neither the deck nor the crampons loaded up. For a 230-lb guy flotation was normal. I did not have my pack on.

I  did not get to climb any or go down any steep hills. When I do I'll add more information.

The Boa system is cool, I like it. I did have a little trouble adjusting one rear strap but it is only a simple rubber belt so that problem has as much to do with me as the strap.

I'll stick with my earlier 4-star rating till I get more time in on them.

It is awesome to have snow once again. I live for it.

I've used these three times so far this season, twice on jaunts without a pack and once with 20+ pounds in my pack for over two hours in a foot of snow. I like them and they glissade easily, maybe too easily if one isn't paying attention. Floatation is good. The BOA system is quick and secure, but I WONDER if the adjuster could freeze up in wet conditioners?

Have since used them a few more times but not in deep snow. I like them, but heel lift is hard to raise. Also I broke the decking next to a near rear rivet. Am not sure how as I'm usually careful going over rocks and logs but who knows? I've only ever walked out of one of them when attempting to climb/scramble up a steep bank after just coming down from the same and I didn't check the BOA adjustment as it is usually very secure and I like it a lot.

Last week I broke, not sure why, a crampon strap. So I wired tied it to the rail to get out of the woods. Got home and called their Vermont Division and spoke to a professional and friendly woman who asked me to send photos and details via email.

TODAY she emailed me with return number and said the shoes would be repaired or replaced. Now that's the way to do business!

Also any 'con' thoughts in my head about the shoes or the BOA system have been forgotten. These are excellent shoes and I've used them in 2 feet of snow.

I agree that the lack of snow in the east has been very disappointing this year, Old Guide. I hope you have the chance to use your new snowshoes soon. FYI, I removed your rating for you until then.

No snow in the forecast :(

I can't wait till we get some snow! It would have been great to have taken a 6-7 hour drive to your neck of the woods this past weekend for some snowshoeing, but the friend who was visiting didn't feel like that much time in the passenger seat. I think you'll like them a lot once you get some mileage on them.

Phil believe it or not, its green here now. From over two ft of white to nothing in five days. I'm ready to slap them back on. Thanks.

Yep, when the ground isn't frozen the temps don't have to get too high for a lot of snow to melt.

I had these shoes out again, been awhile, in our new snow. I pushed them hard on a couple short but steep pitches, down, turn around, go back up, turn around and go back down and then back up. They did well as long as I 'planted' the crampon. The ground underneath the snow was both frozen and leafy and also wet from the rain before the snow fell. Any foot sliding was minimal. I also used the heel lifts, first time for that ever. Not sure I needed them since I never had them before. They are a little stiff to open and close but likely should be. The shoes go through brush easily. If someone found a pair for sale and bought them I think they'd like them except maybe for the steepest and iciest terrain. Also, I'm enjoying the BOA system, its simple and easy.

Yeah, those BOA bindings are really great. The padded wings really help with comfort, too. I'm up north this weekend and may end up using my Blizzard IIs if the snow is fluffy.

I've been looking at your pics to try and figure out what's different between the Blizzard and Blizzard II, and the only thing I can find is the heel lifter is different. I put a few miles on mine by headlamp last night :)

Whatever breaks on mine first is what they improved on yours;) I'll let you know. Nice to hear you were out doing some night stuff. I don't use a light though. I always enjoy that but have a cold so am staying in for a day or so but we do have enough snow now. We received a solid mix over the weekend.

Thanks for the update, Old Guide. I hope you're continuing to get more use of your snowshoes this winter.

We had one more week of good snow after my last post but I was sick through it and just now recovering so I didn't get to play out :) but its still March so who knows, maybe we'll get another dumping and next month I hope to go to the Mtns. Too often this winter we were a couple degrees to warm to get a good snowfall and instead received rain.

Too bad about being sick during all of that snow, Old Guide. Hopefully there will be some more this winter.

Thanks for the update, Old Guide.

Today I received a package back from Louis Garneau. Remember I had sent my Blizzards in for repair awhile back. They didn't bother repairing them, they instead sent me a new pair of Blizzard II's in the same size [36inchers] which is an upgrade!

I'm impressed and happy. I hope you keep Louis Garneau in mind when you buy your next snowshoes. They did me right.

Thanks for the update on your customer service experience, Old Guide. Enjoy the new snowshoes!

Thanks Alicia, I will next winter:)

I'm Old Guide but had to rejoin because of lost computer and password and email but anyways-the Blizzard2 is an excellent shoe and I put them to the test as best as possible this winter. I do wish they had a side rail crampon but they don't. The BOA system is awesome.

I picked up a pair of almost new Blizzard 1036s on eBay for around $80 shipped, incorrectly listed as Redfeathers. There’s slight scratching on the frames and a small piece of one plastic heel pad is broken. Come on, snow!