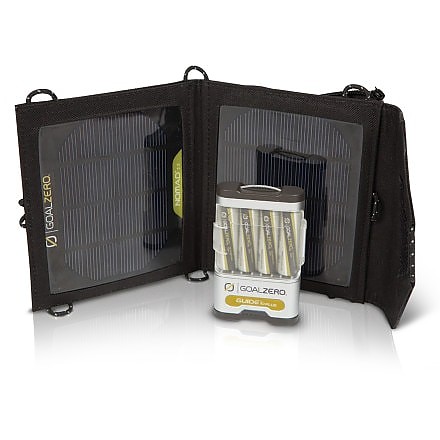 This panel can collect up to 7 WATTS! (far more than most other systems – but even then it takes about 4 hrs of FULL sunlight to fully charge the 4 AA 2200ma batteries in the Guide 10 plus from empty).
This kit is an awesome value! I did a good amount of research before buying this and am quite convinced that in Q1 of 2012 this is the BEST solar charging kit on the market in terms of BOTH performance and value. (The whole thing weighs about 1.5 lb and I hope to have surplus power to help recharge devices of others around me on the trail as well as my own devices.)
I got mine from Amazon for about $90. It includes the GoalZero Nomad 7 solar panel and the GoalZero Guide 10 Plus. (as well as 4 high capacity NMH 2200 AA batteries) It has multiple attachment points on the Nomad 7 panel making it easy to attach the panel to the top/back of backpack. It has 3 connectors coming off the panel for feeding the Guide 10 power pack, USB out for charging USB based chargers, and a 12Volt car type connector for charging small devices off the panel.

Some people have reported finicky charging behavior with iPhone / iPod.  I was able to successfully establish a charging connection with a couple of co-workers' iPhones, but will be using Android based phone myself. (Holding off waiting for a Sprint variation of the Galaxy Note or Galaxy SIII.)

I have not yet taken it on an extended trip but am quite happy with the kit so far. Do not waste time on the other options out there. This is the one to go with if you want a solar charging / power pack solution.

This whole kit ($90) was cheaper on Amazon than just the Nomad 7 solar panel by itself if purchased directly from GoalZero.

I was so impressed with the GoalZero Guide 10 kit that I hope to add the Nomad 13.5m panel for about $120 that is daisy chainable with other GoalZero panels for faster charging.  (I will not use the 13.5m for backpacking but keep it around "base camp" when the grid is not available)  The Nomad 7 daisy chained with a 13.5m should be able to fully charge the Guide 10 plus power pack in less than 2 hrs in FULL sunlight.

I may eventually want to get a Sherpa 50 as a power station when car camping / 4 wheeling to supply city slickers with "juice" for their electronic gizmos.  (With 5 times the capacity of the Guide 10 Plus it should be able to charge almost every gizmo in camp)

When out on the trail and attached to your pack, don't expect the system to catch any sun rays. For the most part, at best, your back, with the system attached to your pack, will only be directly in the sun, at best, 50% of the time... simple probability... changing direction, trees, canyons, etc. The system requires direct sunlight and will not charge well with intermittent sun. Also, my camera cord was attached to the battery pack system on a particular hike, ideally charging the camera battery as I hiked... not only did it not charge the battery at all but by the end of the hike the cord became permanently damaged due to the constant movement of the cord end attached to the Guide 10 system. The first time I used the system was a day long hike in southern AZ where, as you may know, has very little obstruction, for example, no trees. The system, attached to the top/back of my back didn't come in direct contact with the sun to really catch a charge. I used the system twice more, both on a backpacking trip in the Grand Canyon. Again, no obstructions between the system and the sun but the system did not function well until the system was removed from the pack and allowed to sit in direct, uninterrupted sunlight for several hours. My advice... pack it away until you get to base camp and unfold the unit in direct sunlight for several hours to charge the battery pack. Or... As I do now, due to the weight of the Goal Zero, carry several extra camera/gps/phone/etc. batteries which will all probably weigh less and require less space than the Goal Zero. Don't get me wrong, it's a fantastic piece of gear for base camp that really does work but it is heavy and requires attention. If your trip is a week or less, consider carrying additional batteries proprietary to your particular electronic equipment. It's not the greenest way to go but there is a weight and space savings... hope this helps.

I agree with most of what you are saying. I would also like to see additional improvements to the system. (mostly weight related) They use mono-crystalline panels so that is about the best you can get - I do not think it is fair to blame GoalZero for panels working far from optimally while hiking. (I find best results are to lay out the panel in unobstructed sun during breaks, but I believe you CAN charge the Guide 10 power pack while hiking at sub-optimal rate and then use the power pack to "jump start" other devices at night. I consider it a "luxury" item and not part of "ultra-light" approach. But I have multiple electronic gizmos I plan to actively use. MP3 player, android tablet as GPS, external speakers, headlamps, etc.

Hi, Roadkill, I'm curious. How long/far have you actually hiked with this system attached to your pack to believe that it can work? I'm a great believe in being candid and, in my experience, it does not perform as some may expect, I expected. Once Goal Zero make those changes to the system you're expecting then maybe it will work. I do not think people should be led astray. The system works fine at base camp while in direct sunlight. While hiking, it did not absorb enough sunlight to even minimally charge the uncharged battery pack. I wish the facts were different.

I have so far had good results with laying the panel out to charge up the Guide 10 power pack. I have had POOR results trying to charge DIRECTLY from solar panel to device needing to be charged without the battery pack to function as a buffer. I hope to be able to give better feedback after an extended backpacking trip with limited ability to lay panel out for several hrs.

This review is not quite correct in a few respects: First the GZ panel used in the Guide10+ "Mobile" kit is the smaller Nomad 3.5, not the Nomad 7. Reading the specs for the "Guide10+ Mobile Kit", we see for the Nomad 3.5 panel a max of 3Watts when using the special solar cable, and 2.5Watts using the USB port. By the numbers, this will take the system approx 6 'peak-sun-hours' to fully charge a depleted set of AA batteries (which in real terms means at best 2 days). If you read the specs on the nomad 7 panel used in the "Guide10+ Adventure Kit", it is actually only able to output max 6 Watts when using the special solar cable for the Guide10+, and a max of 3Wats via the 12V socket, and 2.5Watts via the USB port. The comment made above in regards to solar efficiency while hiking (tree cover, orientation towards the sun, etc) is exactly right. The Goal Zero product line was designed around crystalline solar cells and is best suited to direct sunlight & the locations that provide it (Africa, southwest USA, etc). If you are mountain trekking, or think direct sunlight exposure for any reasonable length of time each day is going to be a challenge, then you are better off with a thin-film solar panel like Powerfilm or Global Solar/Brunton. Plus these weigh a lot less than the Goal Zero panels. Hope that helps... I do portable power system consulting if anyone needs assistance.

Goal Zero makes top-quality gear. This is their most basic kit, and it is designed to support USB devices. It is easy to use (plug & play), and performs well in the conditions it was designed for.

The Nomad panels all come with great attachment loops to help you attach it to your backpack, or secure it to the side of tents, bike panniers, etc. Note that the max power of the Nomad 3.5 panel is not sufficient to charge many smart phones directly from the sun... you really do need to use the Guide10+ battery pack as the storage/delivery interface for your devices. But that's fine, because if you need to charge something in the evening, you need the solar storage battery.

The Guide10+ battery pack is excellent. It stores your solar power in 4 low-self-discharge AA NiMh batteries which can be easily replaced, or use your own NiMh rechargeables. The Guide10+ supports all small USB devices, and will power tablets like the iPad, but will not 'charge' these larger USB devices (due to limited output power). One drawback is that you must use 4 batteries. So I advise that you use only quality batteries because if one goes down dead, the Guide10+ will not function.

Source: I work at Modern Outpost, and try each product in order to be able to consult to trekkers & expedition groups 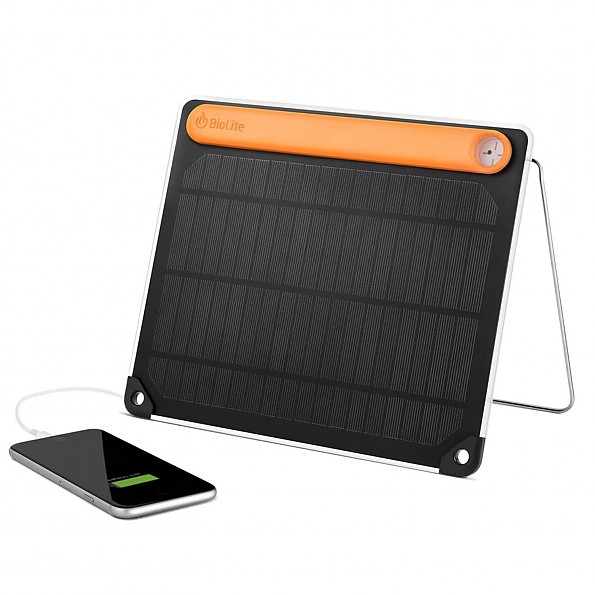