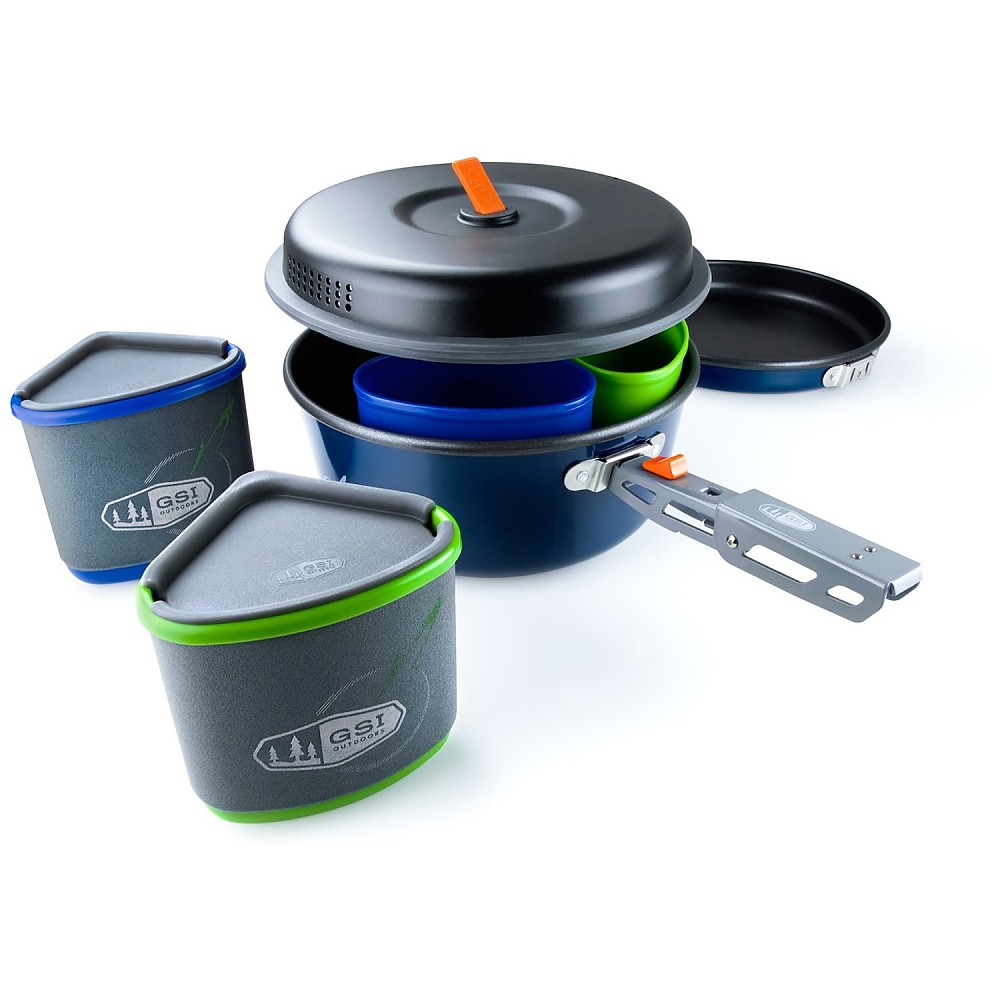 Not a cookset for ultralighters or even those looking to minimize weight. Perfect for backcountry gourmets who want to do more than boil water. Definitely big enough to cook food for 2-4 people.

I teetered back and forth on whether to give this cookset an Average or a Very Good rating.  I finally opted for Very Good since there are some great benefits of owning this set.

I'll give the cons first...  This is definitely not the cookset for anyone who only needs to boil water on the trail.  It weighs in at over a pound-and-a-half and it's bulky so it takes up quite a bit of space in a pack. The pot and frying pan have a Teflon coating so don't use anything that's going to scratch it. Although the plastic lid works fine on the pot, you can't use it on the frying pan without the risk of it melting around the edge. Finally, the handle is heavy enough that you risk tipping your frying pan if you let go of it.

Now for the good stuff...  The entire cookset (with the exception of the non-stick coating) is tough. While loading my pack, I sent it tumbling about 50' down a rocky hillside.  It bent the pot but the carrying case/sink didn't puncture and nothing else was damaged. I especially like the case/sink even though I've read reviews where one of the major complaints is that the strap holding everything in the case won't stay closed. It's a velcro closure but I've never had that happen.

The two "bowls" nest inside the insulated cups and have measuring markers inside. With the cups nested, there's room enough for the handle in one and spices in the other and they only take up half the space in the pot. That leaves the other half of the pot for a MSR Whisperlite stove and a scrubber pad.

The cookset is almost too big for two people and will easily accommodates cooking for 4. It makes a great gourmet cookset for those of us who like something more than a dehydrated meal in the backcountry, so it's ideally suited for base or car camping.

Overall I love this cookset. Great for backpacking overnight or multi-day hikes.

This cookset is a good set for overnight and multi-day hikes. I like how it came with cups, lid, and a pan. This set is well made. I have used it hard over the past few years and it has held up to the abuse I have put it through.

Source: bought it new
Price Paid: Bought it at retail