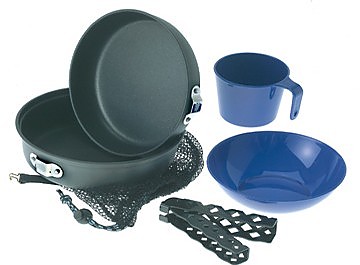 Despite its limitations...I really love this cookware set.

This cook-set has a number of limitations...but I have not yet found the perfect cook-set...so overall I think this set is great at what it does. I typically use this set for canoeing trips...and sometimes for kayaking trips if I am fishing or want to add delicious meals to my trip at the cost of some extra space.

For me personally the biggest weakness of the cook-set is the weight and size...I cannot see how anyone could take this system backpacking...so for me the cook-set is taken along only canoeing and kayaking trips. I also find the relatively shallow shape of the cook-set makes boiling pasta or water for dehydrated meals less than optimal...but it will get the job done in a pinch...and it cooks rice like a boss with the right stove.

Baking is out of the question since I fear warping the pan and ruining the non-stick surface...but anodized aluminum might be able to take the abuse...I just wouldn't chance it.

Overall though...this cook-set is a good buy...and super cheap! If it had a deeper bottom pot for boiling with the same frying-sauteing lid I would be thrilled with this system on canoeing and kayaking trips when size and weight are less of an issue...particularly since this cook-set is already much too large for backpacking in most cases. 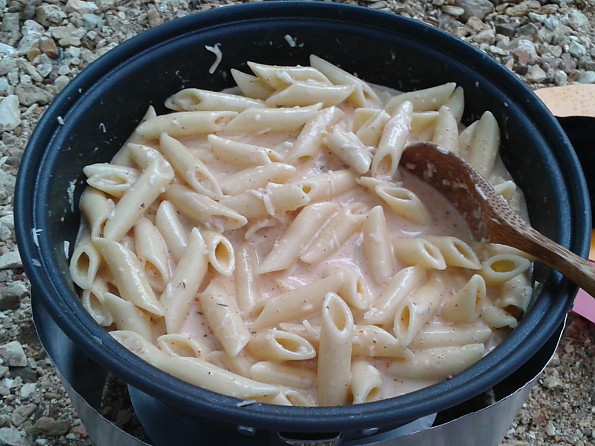 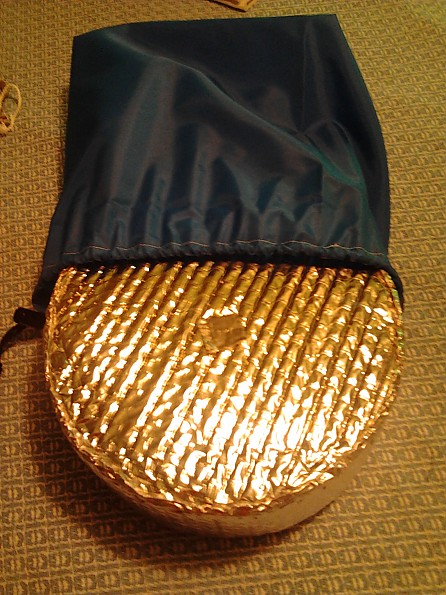 I have the previously award winning "Hard Anodized Extreme Cook Set (Medium)". It has two; 1.5 and bigger 2.5 quart pots and their respected lids, a.k.a. fry pans, diamond back gripper, two cutting boards.

The material that the pots and the pans are made of, has a durable and non-stick coating, but in any case I am using wooden utensils, spoon, sptula, etc. when preparing my food, not to scratch it. Smaller one nestles inside the bigger one and my Primus kettle nestles inside the smaller one; all in a mesh bag.

For car camping, when there is no limitation on selecting which gear to take, one can load all in the trunk, but when it comes to backpacking, the bigger pot is taking way too much space in my pack, so I am leaving it behind.

In either case, they can be considered as light. Newer mess kit has a smaller pot, it must be even lighter. Hard anodized aluminum is the way to go.

One star missing rating is for the rather big dimension, do not think otherwise.

The only reason I didn't give this set 5 stars is that with the newer ultralight stoves with small supports it's a little hard to deal with. The pot and pan are just too wide and get unstable with much of a meal or boiling water in them. Otherwise this set has been awesome!

My wife and I bought it around 2001 and have used it on every backcountry trip since then, and it still looks like we bought it yesterday. The non-stick surface doesn't have a scratch, they aren't discolored, and they haven't bent under many, many times being crammed into a backpack (sometimes in our checked backpacks on plane trips) and lugged around the country.

We upgraded from plain stainless pots/ pans and have been very happy since we like to cook some pretty sticky, gooey stuff sometimes like fried fish, eggs, sauteed veggies, pancakes, rice and oatmeal. It usually only takes a little wipe with a paper or pack towel we use exclusively for that purpose. The mesh bag fits great also and the potholder works without a hitch. Bowl and cup are still with is as well.

I have been going solo and with friends who prefer to do their own cooking since we had kids, and have bought a Snow Peak Giga Power stove, so I am considering getting one of the smaller diameter pot/ pan sets for the lighter weight and better stability on a small stove.

Other than that,I would HIGHLY recommend the GSI set, actually I think I will be getting the new(er) GSI Soloist kit, so if that isn't testament to the company I don't know what is.

Hard anodized aluminum is the way to go. The non-stick finish on this product is incredibly strong. This set is very versatile: you can cook anything from soups to bread-battered fish fillets, to pancakes in the morning.

For the weight, and the money, and the size, you'd be hard pressed to find a better cookset. Unless all you want to do is boil water, than this is overkill. But if you've got a flair for backcountry cooking, you'll love this.

Three years of ownership and no significant wear on the pans. Doesn't burn one spot of your food like the titanium pots do. They balance well on a Pepsi can stove and they clean up easy. Honestly I will never buy another cook set, unless I lose this one. I'll buy this one again.