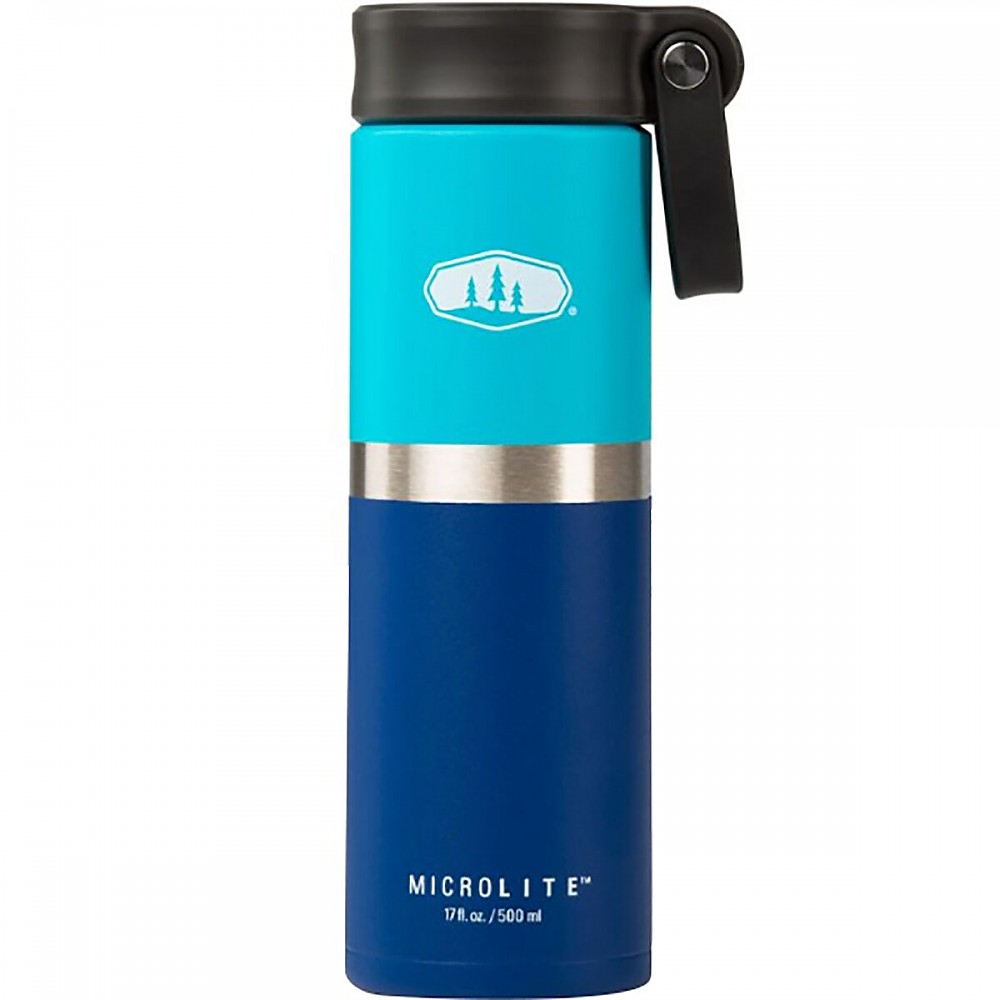 Small and light, yet a fully functional thermos bottle. Keeps contents hot or cold for longer than expected with a low volume container. Easy clean design. 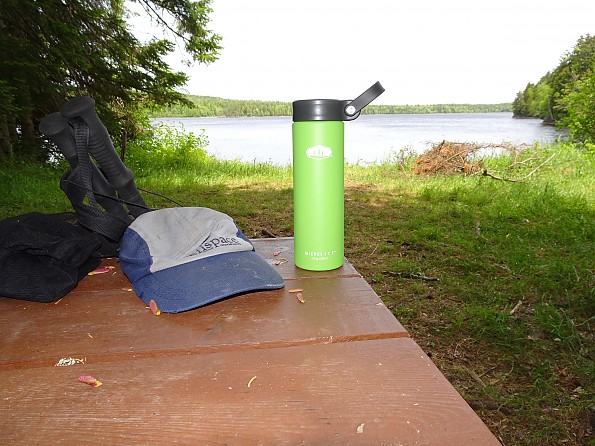 GSI used a double walled stainless steel (18/8 for you metal nerds) design to give this thermos a claimed 10 hours of heat retention and 20 hours for cold. The exterior has a textured surface applied which gives the bottle its color, your choice of black, blue, or green. 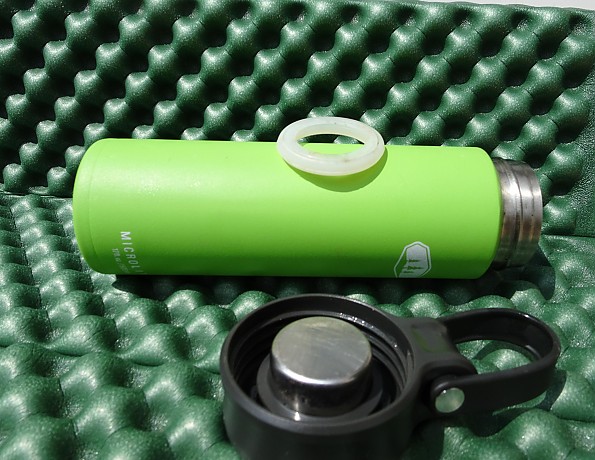 Lid with inner seal removed. Note the deep threads on the lid and the stainless steel stopper

The well designed lid is a big key to this bottle’s function. Many insulated bottles have problems with heat transfer via the lid, but GSI uses an insulating stainless steel plug in the lid to seal off the top of the bottle. There is a silicon seal that can be removed for cleaning giving full access to the rest of the lid as well. The lid is well secured by the deep threads on the inside of the lid.

Connected to the lid is a loop of plastic that can be used for attachment purposes, but is also there to act as a lever to aid in screwing off the top. GSI says that if the top ices up this will get it open again, though I thankfully didn't get to test that this summer. 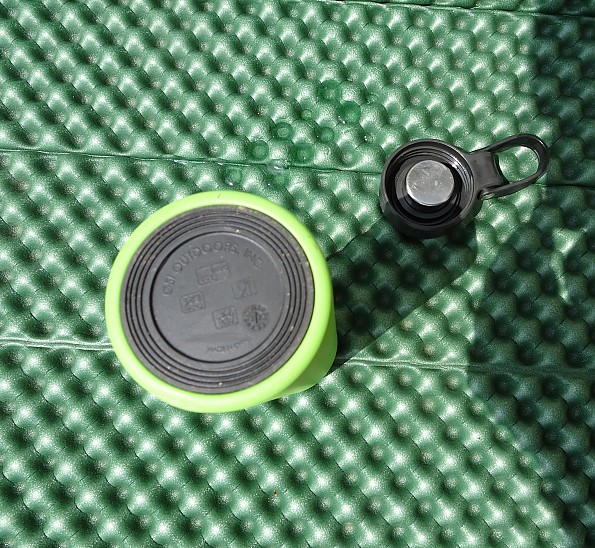 I performed two tests at home for heat retention and one for cold using crude instruments, but I think what I found will tell you what you need to know about this bottle.

For cold testing I filled the 500 Twist almost to the neck with ice cubes, then filled the bottle to the top with cold tap water. The bottle was kept in an environment that started out at 86°F, fell to 72°F overnight, and then returned to 88° by the end after 25 hours. The bottle was opened several times during the test to check ice melt progress. 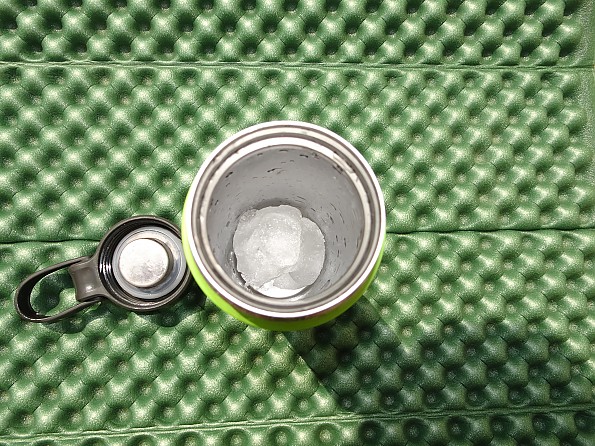 There was still a solid chunk of ice roughly the size of four cubes fused together which remained after 25 hours.

Steel body and solid lid design combine to make a bottle that is packable and droppable. This bottle looks new after months of testing, but some of the color coating rubbed off from another of these bottles I was testing. The bottle was next to a pole in the saddlebag of my bike on the way to the trail so was rattling around for several hours on the highway, but the damage was entirely cosmetic and minor. The exterior wipes clean and shows little signs of wear.

GSI recommends hand washing and the instructions mention that dishwashing may prematurely age components. The wide opening makes hand washing easy and I see no reason to put it in the machine myself.

The lid design lets hands easily open and close the bottle. Wide open top is great for pouring contents into a cup or down your throat. That wide opening also makes cleaning easier both in terms of seeing inside and getting a bottle brush in there. The removable silicon seal is vital for keeping things clean, but can be hard to remove without a tool if you have big fingers. The narrow profile makes this bottle easy to pull out and put away while on trail. 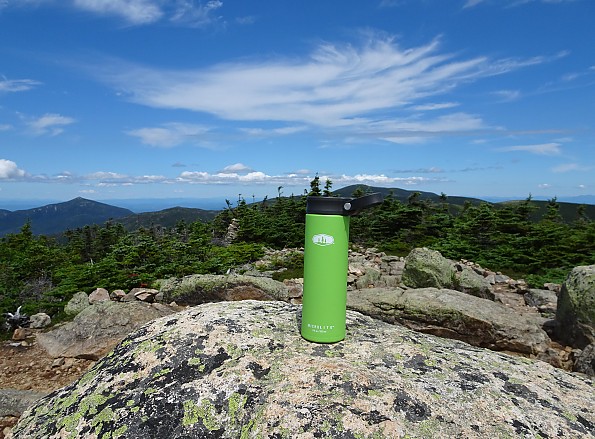 The Microlite 500 Twist resting on top of Bond Summit with Garfield to the left and South Twin to the right (White Mountains, New Hampshire).

I used this bottle on all of my backpacking adventures over the last three months and on a lot of day hikes as well. It is the perfect size for mixing up the Gatorade tubes I carry so it saw a lot of use in that role.

When I first picked up the Microlite 500 Twist I started to doubt it as a thermos. It felt too light and opening the top to see how thin the bottle wall was didn’t inspire much confidence either. Using it proved that maybe GSI knew what they were doing after all.

My field testing was mostly about keeping a cold bottle of Gatorade on me throughout the day and I really enjoyed my testing heh. On day hikes I’d load it with cold water and a few ice cubes before we left the house and enjoy break time a bit more than usual. While I haven’t had a chance to do any cold weather trips during this test I have a feeling that filling this thing with tea would make for some very happy breaks on a snowshoe or ski outing.

The sturdy construction that using double layered stainless steel provides for a solid bottle that can handle real world use. It never leaked and the exterior shows almost no signs of wear.

The unattached lid is either a feature or a bug depending on your viewpoint I guess. The larger sized bottle uses a collar to tether the lid to the bottle. The user could take a bit of guyline or similar small line to create their own attachment. I found that even with a pretty thick line the lid could still be firmly screw in place with  no leaks. That being said I used the bottle without the lid tethered and didn't find it bothered me in any way.

I did have a little problem getting the seal out of the lid for cleaning and think they might look at making that easier. Using a tool on it, as I have to, risks tearing it eventually I think. The space in there is just too small for big fingers. Maybe some sort of pull tab?

Other than that I came away really impressed with this bottle. With the MSRP around $25 and discounts to be found it isn’t a huge investment. Given the durability and ease of cleaning I’d expect to get years of use. To me, hot drinks on cold days or cold drinks on hot days, that is an investment that will pay off in happiness. I’m comfortable recommending this particular bottle and the Microlite line in general as being worth a try if this size isn't what you're looking for.

Source: received for testing via the Trailspace Review Corps (Sample for testing and review provided by GSI Outdoors)