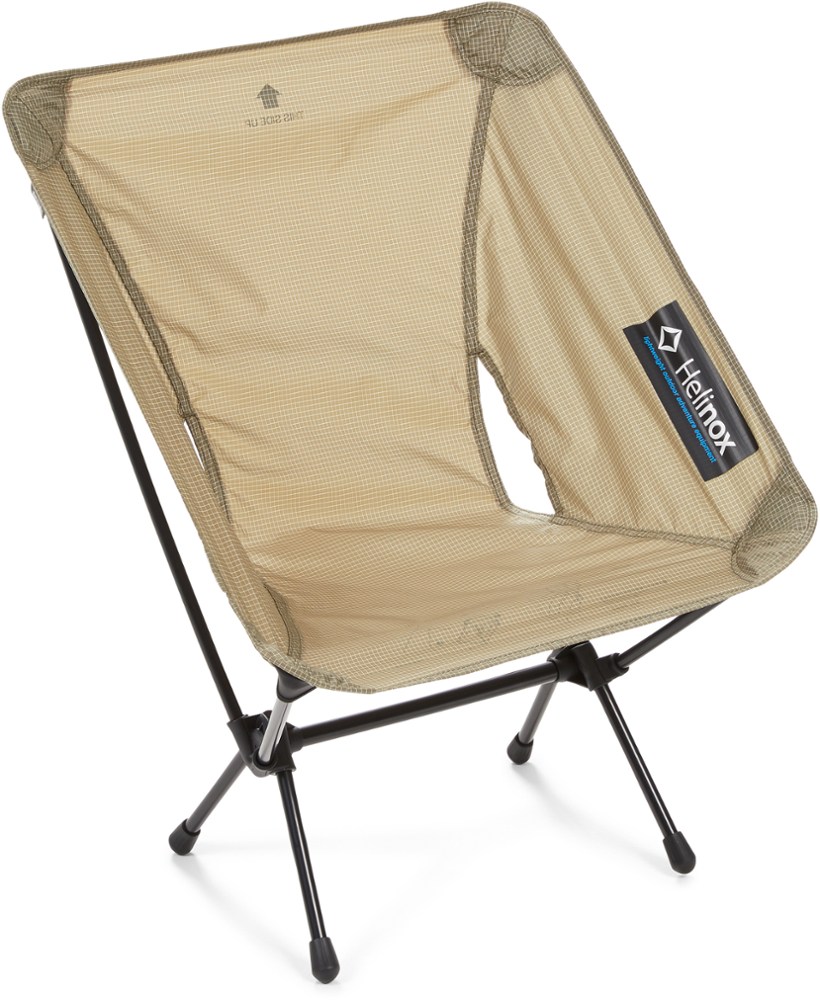 Sometimes I get the impression that UL hikers think comfort is a dirty word. For my part, I try to solve the weight-time-distance-comfort equation to maximize the FQ (fun quotient) for any given trip. Something to sit in or at least lean against can dramatically enhance the FQ on some trips, especially those that allow time for sitting around reading, sipping coffee, and nibbling bonbons.

So ever since lightweight-ish chairs for backpackers came out years ago, they have always been somewhere on my “maybe” list for any given trip, usually coming along on weekenders and sometimes even three- to five-day trips, depending on other considerations and necessities.

All the lightweight chairs that I have tried until now were all of the simple “monofold” (Crazy Creek) type, either standalone or ones that work with a self-inflating mattress. The welcome introduction (for my aging bones) of inflatable mattresses has worked against the latter type, because they just don’t work well with a full-length, two-inch-thick mattress. It was always hassle converting between uses anyway.

Enter the Chair Zero, a folding sling chair in the one-pound weight class that promises comfortable seating at a minimum weight penalty: 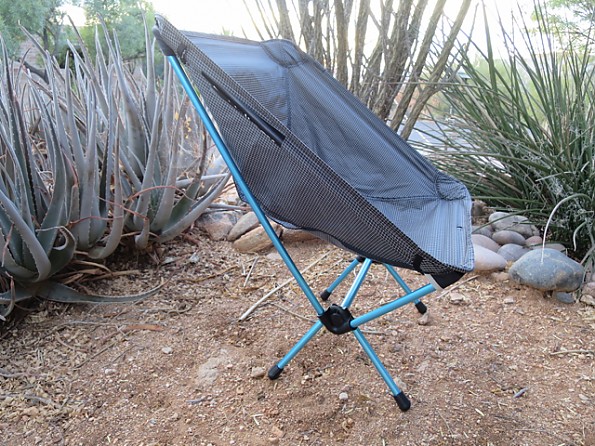 When I read some rave reviews of this little beauty, I immediately thought “his and her Christmas presents!” The Zero is pricey enough that I broached the idea with my wife (rather than spring a surprise at Christmas), and she was in favor. With a 20%-off-any-one-item sale going on at a local retailer we hustled right on down, tried out the Zero, and compared it with a couple of other, somewhat heavier, but also less expensive, backpacker’s chairs. Despite the reservations noted below, we set a premium on the saved ounces and got us a couple.

We tried them out on a car-camping weekend, just enough to get a first impression. When we tried them out in the shop, we both noticed a soft spot at the lower back; where other chairs gave some support down there, in the Zero it was missing. But it’s so light! So with the discount bringing the price down to under $100, we got a brace of them anyway. 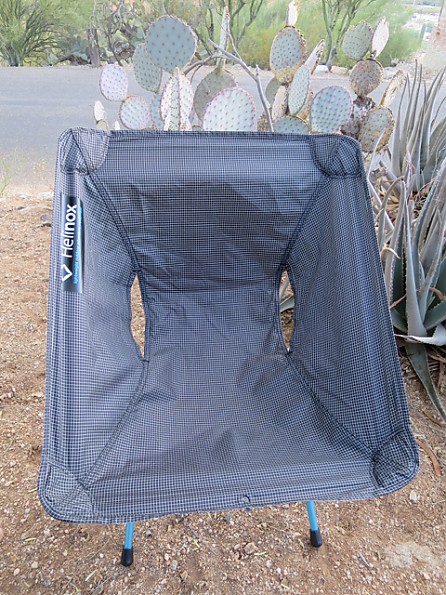 I felt the same soft spot on my lower back when we sat around in them at camp, and cooncluded that the chair just wasn't sized for a tall guy like me. Then after I posted my initial review, another user ponted out that I seemed to have the sling rotated 180˚(see comments below) -- the logo on the chair in the picture above should be on the lower right. The assembly instructions are printed on the back of the sling, and to me (and I think to the people in the shop) it was only natural that they should go right side up on the back rather than under the thighs. There's no indication of the correct rotation in the assembly instructions, so I think it's an understandable error.

Now that I've tried it the other way round it's much better, but I'm finding that I'm sort of locked into a single sitting position, with my long legs stretched out front. People with shorter legs might get a little more variety. My old monofolder has an adjustable angle that offers a little more variety.

I wouldn’t dream of using the Zero inside a tent because the four legs could potentially damage the floor. I see that Helinox makes a weight spreader to help keep the legs from sinking into sand or soft ground, another potential problem, but that adds 5 ounces and I still wouldn’t trust it on a tent floor.

But during our weekend test, where were using a tent with a roomy vestibule, it occurred to me to try sitting in the vestibule in the Zero, thinking that in inclement weather it might be desirable to be able to do so. Fully loaded, it puts your butt about 6.5 inches off the ground, so using it in a ca. 40 inch high vestibule was a no-go for me, whereas a ground-level monofolder might work just fine.  I guess that's just a trade-off, because it is nice to get up off the ground a bit.

Otherwise it's a beautiful piece of design in a very light package. In the stuff sack it weighs in at 505 g, just shy of 18 oz, so it doesn’t quite meet the one pound goal, but it feels feather light. The frame is shock-corded together so that it is effectively one piece, so putting it together and folding it back up is a breeze. 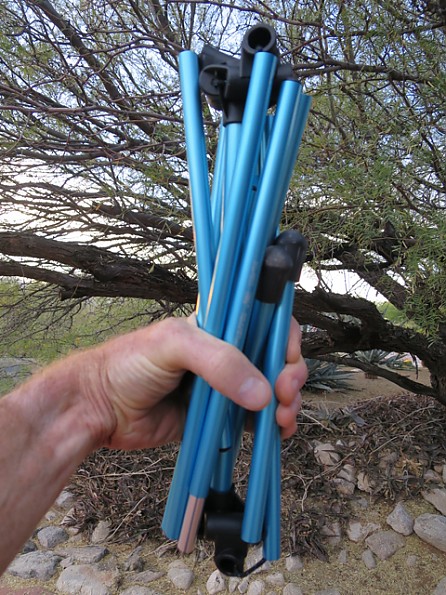 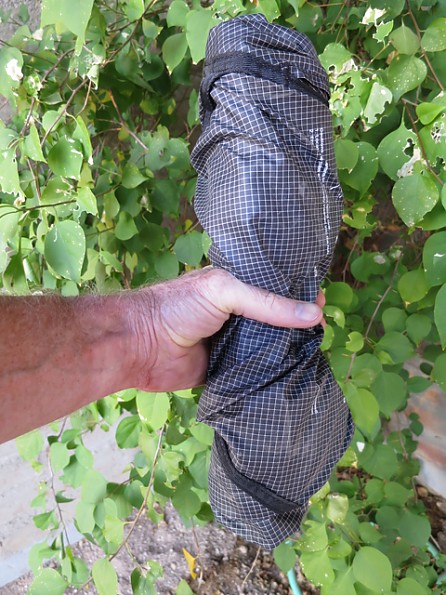 The molded “knuckles” that hold it all together are a bit bulky but made of some kind of tough plastic that handles the weight and flexing well. I haven’t tested the given 265 pound load limit (I would need to sit in it with nearly 100 pounds in my lap—my wife weighs a bit more than that…) but I believe that it should be able to handle it no problem. 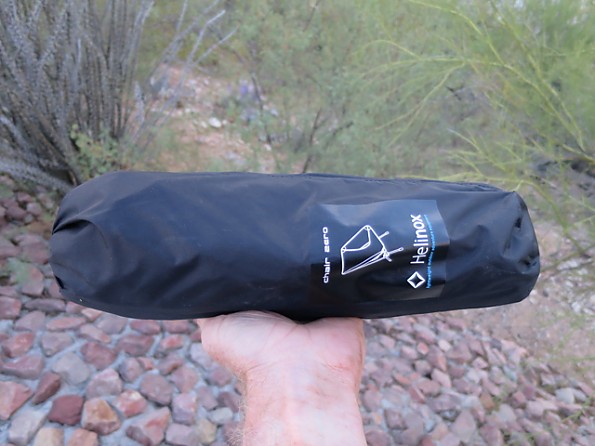 The folded-up package is small enough to fit into a water bottle pocket on the outside of a pack or wouldn’t take up much room in the main compartment.

Before I was notified of my mistake, I was thinking I would return my Zero because I just couldn't get comfortable in it for very long. But now that I've got it turned around the right way I'm really looking forward to having it along on my next backpacking trip. But I'd still suggest potentials buyers to go to a shop and "try before you buy".

Great review, BigRed! Thank for taking the time to sit down and share all the details with us. Let us know what chair you end up with, please.

Thanks the review, BigRed. Being tall myself, I find such chairs to be hit and miss as well. I haven't tried this one yet, but will take notice if given the chance. Thanks!

Try flipping the cloth around so the logo is on the lower right hand side. It feels much much better for me that way... ;-)

And I use a piece of Tyvek as the groundcloth for the chair. Works great most of the time to prevent the feet from sinking and I use it as an entrance mat into my tent.

Thanks, Jason, that's much better, and I see now that's how it's shown in the product stock photos. To me it was only natural to have the instructions panel printed on the back of the sling right side up at the top, and I see no indication there or in the tags (except the photo) that it should be otherwise. I will change my assessment and edit my review accordingly.

Thanks for the review, BigRed. It is confusing the way the set up goes, but Jason was spot on, as that's the proper set up, and makes assembly easy. I'm 5'7", and I like the Zero: I've also had no issues in my NEMO Hornet or Zpacks ( it's Dyneema, so naturally stronger) tent, with the bottoms of the legs impacting the tent fabric. However, I only weigh 115. I actually think the Helinox Ground chair is more comfortable, and fits in both of my tents on the inside for reading at night. However, I'm not 6'4"!!! Thanks for the review!

Hope it works better for you! I had put it on the other way and noticed it was not nearly as comfortable. I did wear a hole in mine on an unintentional slide when backpacking near Moab this past spring. I now carry it inside my pack. A bit of Tenacious Tape has been holding since then.

I went with Bryan's input and got a Ground Chair, about 130g / 4.6 oz. heavier but usable in a vestibule. My wife is sticking with her Zero so we can trade off and do a head-to-head comparison. We've got a 5 (mostly easy) day hike in the Grand Canyon next week, so that will be our testing ground.

This is a super light chair which is very useful in the backpack or even the paniers on a bike trip. It weighs less than a full water bottle, and it is great for a picnic. The legs will sink into loose dirt, mud, or sand—so pick hard ground.

The chair has been a great addition to the backpack and paniers on day trips and adventures in the woods. It works for adults and kids, making it something we fight over! It also is great for the living room when adults, who are perhaps not as nimble, are asked by preschoolers to play on the floor for hours on end.

Thanks for the review, NH_and_CH_Mountaineer!

Having made fun of such chairs carried by other backpackers, I had to eat my words this summer when I caved in and bought the Helinox Chair Zero.

I consider myself an ultralight backpacker, a veteran of many decades. My current pack weight for a week on the trail usually comes in at about 20-23 pounds (depending on bear canister or no), including food, so to consider adding a whole POUND of weight to my load required a monumental trade-off. For me, this chair is well worth the extra pound of weight.

Some of the earlier folding chairs come in at about 2 pounds, and that is completely out of the question, but when Helinox came out with this one at half that weight, it got my interest.

I've had the chair for about 6 months, and I've carried it on one 9-day trip and a number of shorter ones, and I have many good impressions. I occasionally get some lower back pain when bending over to set up camp, so it's good to have a place to sit and relax completely when done. Can't do that sitting on a rock or on a bear canister. No back support. This chair gives me that option. It is low enough to cook with the stove sitting on the ground, and also low enough to use sitting just outside the tent while organizing the inside, inflating air pad, laying out sleeping bag, etc.

It folds up small enough to easily fit inside my pack, or to tie to the outside if I need the additional inside space for a bear canister. Setup and break down is fast and simple.

Because of the low height, some of us older folks might find it a little harder to get up from it, compared to getting up off a bear canister, for comparison. However, that is of little consequence when you learn that you can just push up with your hands on the front supports when standing.

The only other problem, common to all of these chairs with four individual legs, is that it tends to sink into the soft sand on beach or desert terrain. And because of the individual legs, you definitely do not want to sit on it inside your tent, if the tent has a floor.

Bottom line, I can no longer make fun of others who carry chairs. And, this is the best of them all.

Thanks for the review of your Helinox, Bob! Do you have any pictures of yours in use you could show others?

I've had to eat crow a few times myself over the years, Bob. Thanks for the review! 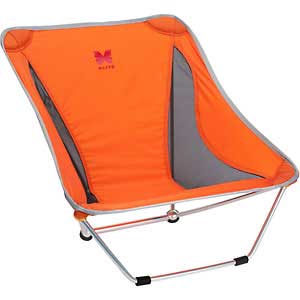 Trailspace's community of gear reviewers has field-tested and rated the top camp chairs. 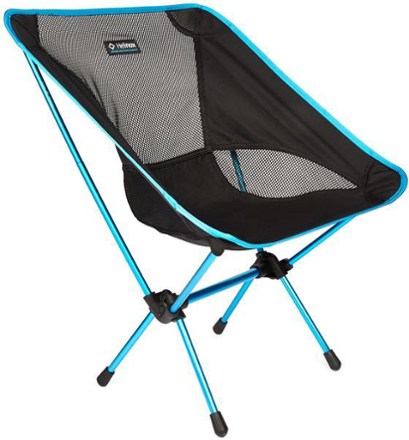 Find the best camp furniture for your next outdoor adventure using our independent reviews and ratings.