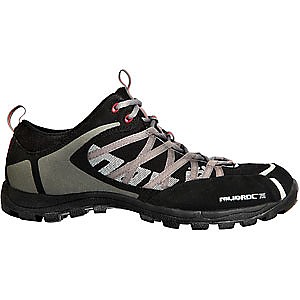 I want to be buried in these shoes.

My previous favorite trail running shoe was the Mudroc 280, light weight and sticky soles. Unfortunately the 280's were a limited production run and I've gotten a bit older and need just a bit more structure.

Flexible. If a trail shoe is too rigid when you step on a root or rock the only reaction is for the shoe and foot to twist. A shoe can also be too flexible poking your poor tarsals and metatarsals like those "natural" shoes all the kids are into. For my running biomachanics this is a really flexible shoe that provides enough protection.

I'm on my second pair and I've run every thing from fun run cross country races to 50k and never had an issue with my feet. I guess a shoe really works when you never even have to think about how it feels or how it fits.  The traction from the knobby soles is great. I was running a trail run that attracts a a lot of road runners. I ran across a slanted rock face with flowing water, the road runners in their road shoes behind me slid off into the trees.

I use these shoes for day hiking and for wearing around camp.

These are without any shadow of a doubt the most uncomfortable pair of shoes I have ever worn.

Having said that, the grip is excellent on soft ground and the soles appear to be quite hard wearing. I have persevered with them for at least a dozen long runs but they dig into the heels mercilessly, (despite steaming the heels) to the point where I had to start carrying a pair of good old Walshes and regularly had to change into these after just a few miles.

They are my first and last pair of Inov8s - I will be returning to Walshes and would advise everyone else to do likewise if they do not want damaged feet!

This shoe comes in the category of 'fell shoe' really, which I realise is not so familiar to people from the US. Fells are rough, often muddy UK hills; fell runners are often not on well groomed paths, and although the hills are small, the inclines are steep and the weather can be shocking!

These shoes are a lightweight model with a fairly thin midsole and a deep, studded tread. They look really narrow, but in fact it's just the soles that are: most running shoes have a flared profile to the sole (to spread shock), but a narrow sole adds stability. Because they're meant for 'soft' underfoot conditions, the lack of cushioning isn't a problem and the narrow sole is a boon.

They inspire great confidence because of their stability and grip. The uppers are not waterproof, but drain well and dry quickly. They also grip my foot very well, making standard running shoes feel really sloppy. The difference between these and 'normal' trail shoes on steep, wet ground is almost as great as that between a mountain bike and a road bike! I love them.

They do have a heel cup which doesn't suit all feet. Inov8 recommend holding the inside of the heel over a boiling pan of water for about a minute, then putting them on and lacing them tight while they're still warm: this will mold the heel.

If you've not seen shoes like this before, you won't even think they're running shoes; they look so different, but if you like running in tricky terrain (steep, soft, sometimes muddy), with not too many road sections, they're fantastic.