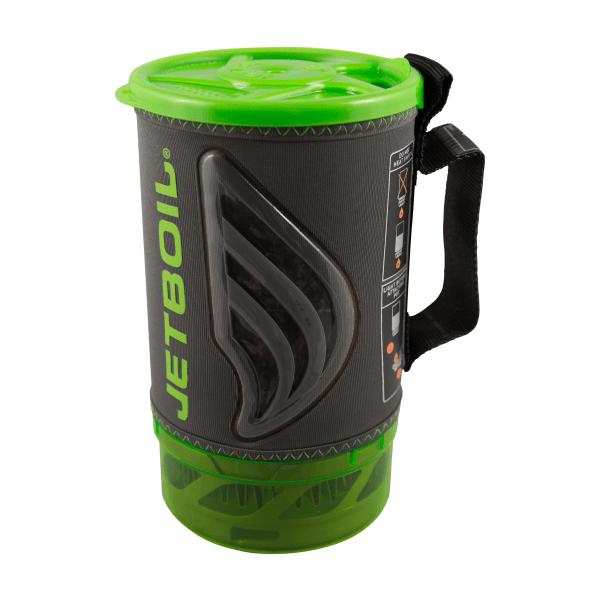 The Jetboil Flash Java kit is a well designed all-in-one stove/cook pot/insulated coffee press that's a cinch to set up and really delivers on its promises to quickly boil water and in its ability to do so efficiently. I would recommend this to anyone who wants to travel with the least amount of gear in their packs, but still has to have their morning brew. Great for everything from overnight hikes on the AT to multi-week excursions in Hawaii.

This stove had me in an almost euphoric mood when I first learned of its newest coffee press feature. I purchased it immediately after that in preparation for a 6-day hike through Tennessee. All 70 miles of the Smokey Mountain section of the AT. I couldn't wait to try it out and show it off to my hiking buddy, or who ever else might be at the first shelter that night. (So many people were using various types of this stove but I had the only Java kit)

I should have prefaced this by saying that I did set this stove up at home to work out any (newbie) kinks before I headed out on this trip. The ease of setup was about as simple as it gets without it assembling itself. That being said the only thing I would suggest would be to check that the igniter is giving you a decent spark. I didn't think of it and sat there clicking the ignition like an idiot trying to understand why I wasn't getting any flame. It took me a minute of nervous careful adjustments before I got it as close to a Tesla's Coil spark as possible and was pleased with how much wiggle room they gave me to work with. Just make sure it's dry. Wet weather can reek havoc on the igniter.

Now that I've maximized my spark it's fill, cap, and light. Three and a half minutes later and I'm drinking my coffee. The cool little color change logo lets me know when it's ready so I don't have to keep opening it up to check. Make sure you have it turned so you can see it when attaching it to the stove. The only improvement I would make would be a whistle in the lid. It would save weight and alert you with out having to be right there looking at it. Now it is HOT so be careful. I have learned to let it sit open for a minute or two before I cap it to help it cool down to drinking temp a little quicker.

Now I assemble the (3) piece plunger, which is a little annoying to have to keep up with when you're not using it — through the rubber cap, plunge and enjoy Mmmmmm mmm-----thpttt...thpppttt. Coffee gounds??!! Oh no! What a disappointing result. I couldn't believe it. What would I do now?

After a little thought and cussing under my breath I decided to try "stretching" the plunger's fins by bending them downwards to hopefully apply more pressure on the sidewall of the cup. And wouldn't you know it? It worked. What a relief. I just have to remember to do it every time or the grounds will sneak through and pepper my pearly whites. The lid has a little opening and a lip so you can drink right out of it. You have to have it but it's a little uncomfortable. Can't figure it out. I think the hard plastic lip just doesn't feel natural enough. And it doesn't help that the plunger's handle touches my nose and prevents me from tilting the cup back. Again making the drinking process feel a little unnatural since I have to cock my head back more. You get used to it.

Now, even under normal conditions I believe the insulator is more of a protection measure over any other properties it may boast. Keeping your coffee hot for a reasonable amount of time should not be one of them. It's a shame. A double wall system would weigh a little more but it would not only keep the water hotter longer but it should help to get to its boiling point much quicker. Theoretically. It's not a deal breaker but I was hoping for a little better. So drink up and enjoy, quickly. Oh and a word of advice. Pay close attention to the fill line. You'll be tempted to overfill and you will pay the price for it.

So we're off to a good start. I'm pretty secure with the idea of using it so it's all I bring. What a mistake that was. I didn't consider that I wouldn't be able to eat and drink out of this thing at the same time. Not a huge deal at dinner but I like to have my coffee first while I boil more water for breakfast in the morning. Because I'm used to having a separate coffee mug and eat out of my cook pot I didn't think about the logistics.

The little plastic cup they give you that attaches to the bottom of the unit is good for sharing a little bit with someone but doesn't hold a full portion of anything and certainly wouldn't keep anything hot for long, plus it would burn your hands if you tried. Better be wearing some gloves. It makes a better cover for the diffuser ribbon since it's still hot.

But even that's giving it a little too many props since it will fall off as soon as you accidentally turn it while it's in your hand. And it turns really easily. Lose it or break it and I don't know what you will do. Deal with it I guess. My solution for future trips was to bring a separate dish for my oatmeal. Still not a deal breaker.

Now cooking with it was easy enough. Making sure I always have it on level ground I don't usually use the included stability tripod unless it's a little too windy. Not one tip over yet. Now wind can be an issue but only on the flame and when you're trying to light it. Once lit it takes a beating before it will blow out. Don't use a wind screen or you could heat up your fuel canister and blow your breakfast all over camp. Just hope that's all that blows up.

Now one complaint I have is that this stove does not have an adjustable flame. To be fair, it's only a pot so you wouldn't be able to fry anything in it anyway. Well, maybe deep fry, but I wouldn't try that. If you like simmering anything for extended amounts of time forget it. You'll char your food if you're not careful. If you could adjust the flame maybe they could raise the fill line so I can boil enough water for my coffee and oatmeal at the same time.

Cleaning is easy, just wipe it out like you would any other cook pot. Try to let it dry out before you put all the parts back in it and sticking it back in your pack. Especially if it will be stored for a while. The water and unwashed food particles can become a big problem for you if not caught in time.

Overall the stove met all of my expectations and preformed the way they said it would and even though there are a few improvements that could be made this stove has a good thing going for it. The fuel cost for it is pretty good too. I only used two small canisters over six days on the AT and the two weeks I spent in Hawaii I probably went through five small canisters and I like to drink a lot of lilikoi tea and hot coconut cocoa. Now I have pretty much given up on using the Jet boil as my coffee mug and just bring my Big Sky coffee press with me. It's a better mug and allows me to keep the pot clean at all times. Oh well. It's still a great back up.

Source: Got it new at discount a little over a year ago when I was the inventory manager at Sunrift Adventures. I no longer work there but still purchase items from time to time.

The Jetboils are amazing stoves. All the pieces (stove, stand, fuel canister) fit inside the pot. This makes them compact and considering the pot is included in the system mostly lightweight. I love using this for alpine starts where quick and easy is very much appreciated.

Setting up the stove is easy. Just attach the canister and you are off to the races. It ignites with a built-in piezo ignitor. The large wire dials are easy to adjust with gloves on, though this stove has one temperature: hot. You can place your hands around the stoves ward off the wind if it gets blown around at all.

The Jetboil will boil in no time at all. Roughly 45 seconds. It also uses very little fuel because of this. I would say I can normally get about 20 litres of water out of a small canister.

The one downside about this stove is that it burns so hot. You can really only boil with this stove. Even cooking pasta is too hot and causes it to boil over. There are some good pieces of advice on the JetBoil Blog (http://www.jetboil.com/Trail-Side/Recipes/Try-Our-Recipes/). But overall this is not a stove for regular food.

If you need a lightweight system that is simple, and useful for lightweight backpacking or alpine climbs with boil-in-the-bag meals then this is the perfect option.