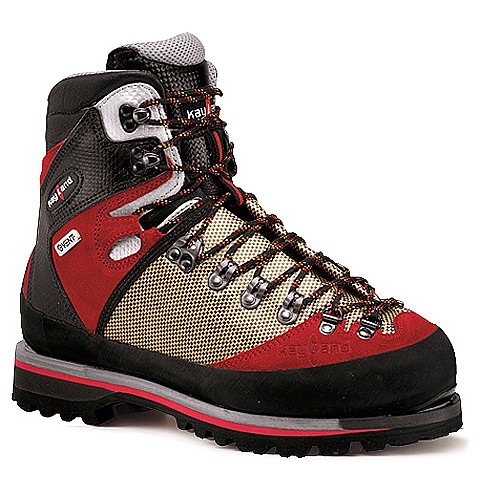 The Kayland Super Ice boot is the newest boot in their mountaineering line that is suitable to general mountaineering, waterfall ice climbing, and mixed climbing. I will comment on my initial impressions of the boot since this is the first season that I have used them.

The boot is a hybrid leather/carbon fibre design that is popularized these days by LaSportiva's original Trango series. My biggest like for this style of boot is 0 break-in time. Compared to my first set of single leathers (Scarpa Cerro Torre) these boots fit perfect right out of the box with no chaffing or hot spots. Kayland markets these to a medium foot width but my E width feet felt perfect in them. EE width might be a problem that only Invernos can solve. The boot uses eVENT as a waterproof membrane which has the added effect of being a semi-vapor barrier keeping your feet toasty warm. I've worn them in -25 C weather with no cold toes (but my metabolism is high). So it sounds like a great boot, but why only 4 stars?

I firmly believe that there are "teething problems" with the Kayland Super Ice that the company should address immediately. The biggest peeve is the weird shaped toe welt that seems to fit only one crampon design on the market (Charlet Moser Dart). Kayland should eschew some aesthetics to make a more crampon compatible welt like the ones on Scarpa or LaSportiva boots. On the other end the rear welt fits most crampons BUT it is made of a very soft material that readily deforms should you "misalign" your crampon while reefing on the release. This is a clear design flaw as LaSportiva or Scarpa boots don't exhibit this so Kayland should clear it up TOUT SUIS!

Still, despite these peeves it is the best (albeit the most expensive) boot that I have had the pleasure of stinking up.