The Shellrock Mid WP has been discontinued. If you're looking for something new, check out the best hiking boots for 2021. 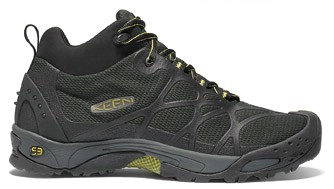 These have Keen's typical wide forefoot and toebox, though not as extreme as their street shoes. The heel is looser than I would like, but that might just be me.

The uppers look thick and burly because of the bumpy texture of the fabric, but they are actually quite thin and soft. They were comfortable right from the get-go, without a break-in period. They do not offer much ankle support, but they are not meant for heavy loads.

The soles provide good traction and appear to be long-wearing so far. They do not use the soft sticky rubber found in some of their other shoes.

The waterproof membrane works well. I spent four days in the Black Hills under near constant rain, and though these boots were totally saturated on the outside, the inside became only damp. Even the best breathable membrane would have performed the same under those conditions. In dry conditions, the boots seem breathable enough to stay comfortable, at least with decent socks.

The eyelets are plastic, and one broke in two (one half on the outside of the shoe, the other on the inside) just from the stress caused by tightening the laces. I tried gluing them back together, but that only held a few weeks.

The insoles that come with the boots are fairly good quality, but don't offer enough arch support for me. I swapped in heat-formable insoles, and they are a big improvement.

I would call these a good choice for a light, comfortable, waterproof boot in situations that don't call for heavy loads or tremendous durability.