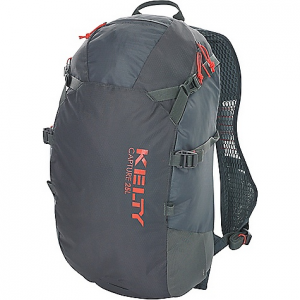 The Kelty Capture 25 is a small day pack that includes…

Source: received for testing via the Trailspace Review Corps (Sample provided by Kelty for testing and review)

The Kelty Capture 25 is a small day pack that includes a unique chest mounted cell phone case that allows you to take video during your outdoor activities. The phone case is a very convenient way to hold a cell phone, but the chest harness has a lot of give resulting in very shaky video.

I would recommend this pack for anyone looking for an entry level day pack that can be useful for a wide range of outdoor activities as well as suitable for carrying books/laptops to work or school.

I tested the Kelty Capture in the late winter to early summer in the White Mountains region of New Hampshire and through out New England. Early testing saw wet snow and rain while the later part of the testing window saw humid and hot temperatures. I was able to use the pack during a wide range of activities such as ski touring, biking, and hiking. 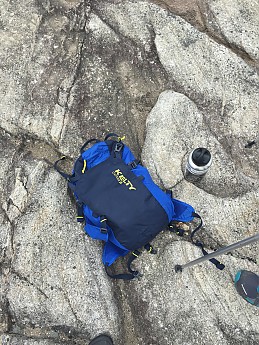 Overall I felt that the pack fit well. It is a basic day pack suspension with limited amounts of adjustment available and a fixed torso length. I found that it was best to keep loads on the smaller size (10 lbs and under) because as the pack took on more weight the shoulder straps had a tendency to dig into my underarms. 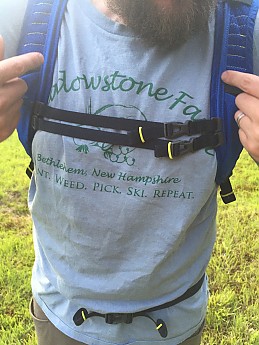 At first I was able to make minor adjustments to the shoulder straps to move around the discomfort but over time it would become a constant pain. However, if loads were kept lighter this issue was not present.

As I mentioned previously this pack has minimal amounts of available adjustment. The hip belt seems better at stabilizing the pack to my back than transferring the weight of the load. However, this is not a big issue since it is a small day pack with limited capacity. 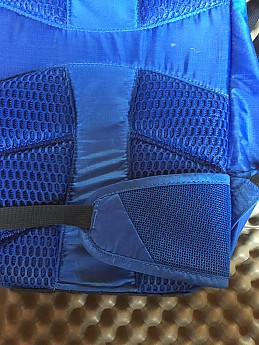 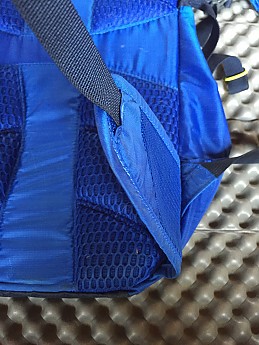 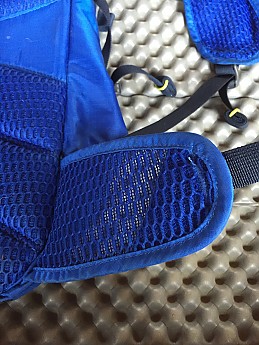 If loads are kept in check, the suspension system is perfectly comfortable. The shoulder straps have minimal cushioning and as I mentioned previously if I put a lot of weight in the pack the wire in the strap dug into my chest.

The sternum strap is unique in that it has two thin straps. This design is more to accommodate the camera holder than anything else. Because of the multiple straps, it took a little adjusting to make the straps fit well. 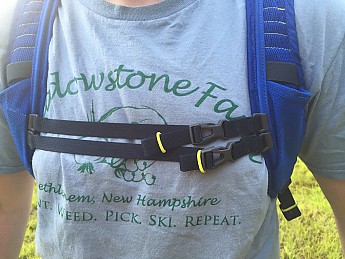 The back panel has some cushioning and venting channels. They helped keep the load off my back which did make for a cooler experience similar to other packs I have tested with similar design. I have a tendency to run hot no matter how a pack is designed, but I was comfortable using this pack in a range of temperatures. 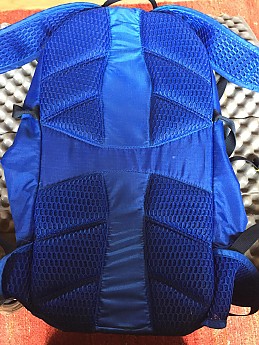 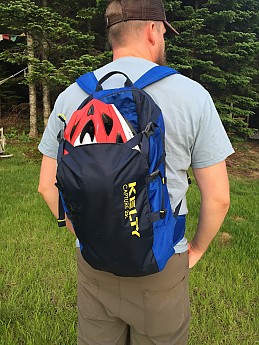 The external pouch did well carrying both my bike helmet and my ski helmet. However, when carrying a helmet I found that some of the internal storage space was lost due to compression. 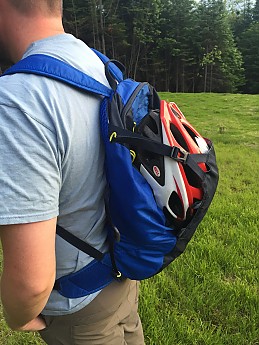 There are three storage compartments and two small pockets on the Kelty Capture as well as the phone holder. They are an external pouch, a small zippered compartment, the main storage area, and one small mesh pocket on each shoulder strap.

The external pouch is well designed to accommodate a variety of sized helmets as well as other gear one wants to store outside of the pack. In addition to my helmets I would stash my shell for quick access as well as my climbing skins during the downhill runs. 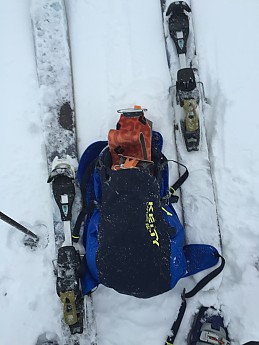 The small zippered compartment was only big enough to fit a wallet, keys, and a small folding knife. I would have liked the opening to be a little bigger to better accommodate things going in and out. Initially I wanted the entire pocket to be bigger, but after continued use I found that it was adequately sized for anything I needed to put in there. 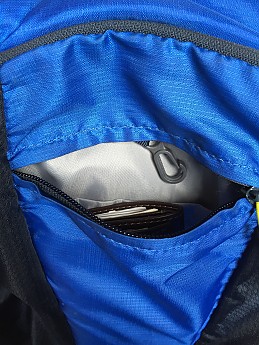 The main compartment was large enough for the equipment needed for a short day hike, bike ride, or quick backcountry ski tour. Separated from the main section is the hydration sleeve. The sleeve is closed by hook and loop and has two clips to attach a water bladder. There is a central port so that the tube can be worn over either shoulder. 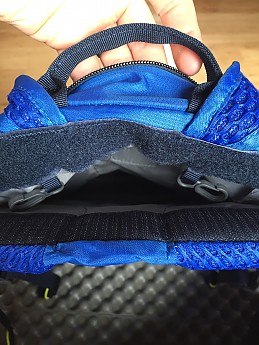 Honestly, I’m not sure about this feature. As a small day pack it seemed unnecessary, but I can see it coming in handy if you wanted to separate some muddy/dirty gear from the rest of the pack. I never really found a use for it though. 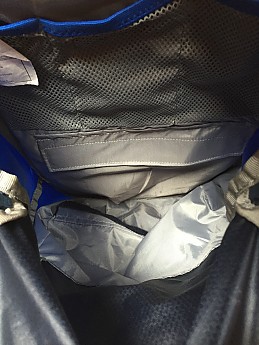 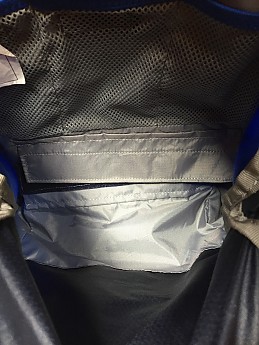 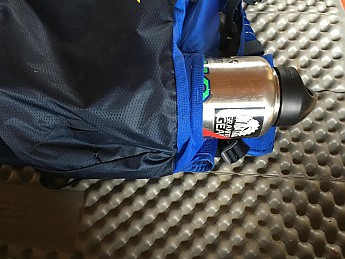 On each shoulder strap there is a deep mesh pocket. These are kept closed by an elastic hem so they are not secure for valuables. I found them to be the perfect size for a gel packet, small Leatherman, or sunglasses. 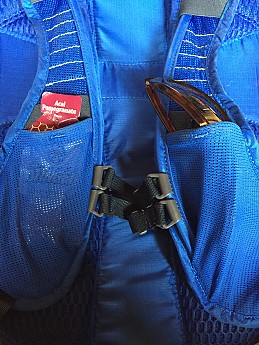 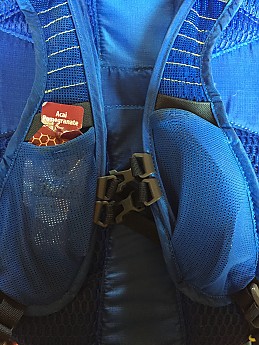 The phone holder is the unique feature of this pack. It holds a smart phone in a padded sleeve with hook and loop closure. There is an opening that allows the camera lens to face outward allowing you to record your bike ride, hike, or ski run. The holder is secured to the pack by sliding the two sternum straps through the back of the holder. It held an iPhone 4 and 6 securely and the lens was exposed for both models. It will not fit a larger tablet/phone like the iPhone 6 plus. Additionally, this feature will likely be outdated very quickly if phones continue to increase in size at their current rate. 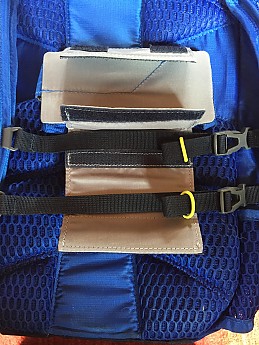 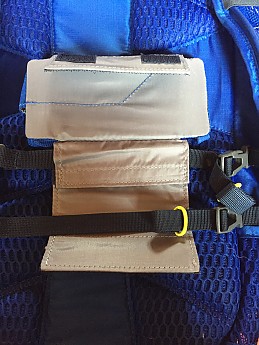 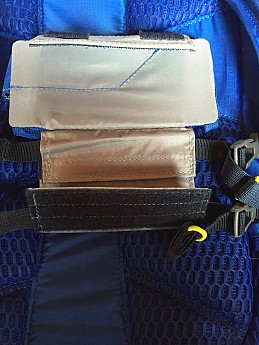 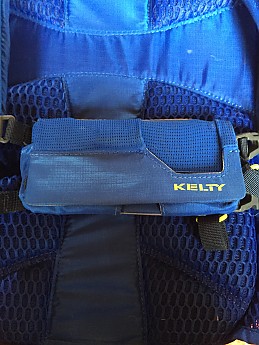 I appreciated the phone holder more as a convenient way to carry my phone than anything else. The advertised purpose of this feature is to allow the user to shoot video to record the activity. However, any time I shot a video the angle was either too low or too high, which is not discovered until after shooting since there is no way to see what is recording once the phone is placed in the holder, and the image was nauseatingly shaky.

It is possible that this is user error. I am not known for my cinematic expertise. However, since the name of the pack is "Capture" and the big selling feature is the phone holder that allows for chest mounted video, I would have liked this feature to be a little more beginner friendly.

If you have the stomach for it I have inserted a short video to show how shaky things could get.

It should be noted that this system only works with smartphones and does not integrate with other popular video recorders.

I found that the Kelty carried a load as well as expected. Because it is a small day pack with a limited amount of rigidity I did not attempt to carry very much weight (about 10 lbs or less). I found that I was comfortable and felt that the pack was stable regardless of what and how I packed it.

There is limited but well engineered compression options for this pack. The two compression straps double as a method of cinching the external pouch but still are able to pull the pack together to keep things tight. Each side of the external pouch has a non-adjusting buckle that can be positioned high or low based on the load the pouch is carrying. I found this useful in securing various helmets as well as keeping the pack snug and compact. 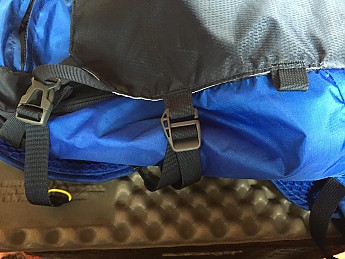 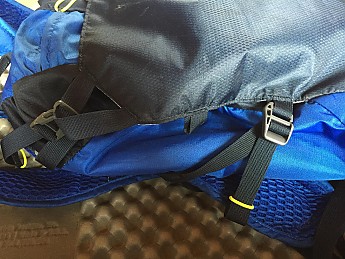 I would classify this pack as entry level, which means that anyone with experience with a school backpack will be able to use all the features. There are not a lot of bells and whistles, which is nice for a day pack.

The big feature that sets this pack apart from other day packs is the addition of the front chest phone holder. Not only does this allow you to film your activities it also makes for a convenient place to carry your smartphone for easy access.

You can also remove the holder from the pack and set it up as a "tripod" to hold your phone steady to capture images as you ride, hike, or ski, past the camera. 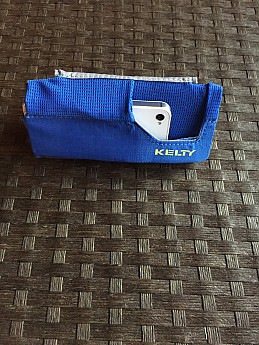 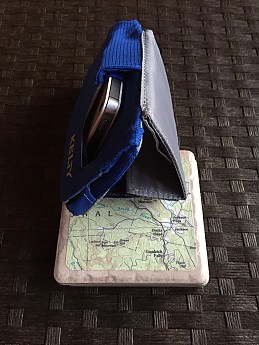 I felt that this feature was more of a gimmick than a useful function. I rarely used it because it is cumbersome. The phone needs to be taken out of the holder to start the video, put back in, placed on a stable surface, and then you need to return to the activity you were recording.

When I first received the Kelty for testing I was initially disappointed in the quality of the materials. The internal frame structure is sewn into the pack and I believe it is nothing more than a moderately thick piece of cardboard. The pack was slightly bent to fit  into the shipping box which resulted in a bend in the frame. It eventually settled out, but if you are looking for a rigid internal frame pack I would look elsewhere.

As I have used the pack I have found that the frame structure does little more than keep the pack's form and prevents things in the pack from popping through and rubbing on my back. This is fine because I don’t feel that it is always necessary to have more than this in a small day pack.

The fabric is a polyester ripstop material that has held up well under use. I have not seen signs of wear yet. However, the back panel is made of a honeycomb pattern of material and this type of design can run the risk of getting snagged and torn over time.

After testing this pack over a period of five months of backcountry skiing, hiking, and biking I felt that as an entry level day pack the Kelty Capture 25 performed well. It does not have a lot of unnecessary features and the features it does have worked nicely. I liked the phone holder for its added convenience of having my phone in a location for easy access, but was unimpressed by its ability to hold the phone stable during recording sessions and the use of it as a tripod was rather impractical.

I would recommend this pack to anyone looking for a basic day pack that can carry a small load.

Thanks for taking the time to test and review this pack, Jim. Nice job! The pictures and video are all helpful. What would you say is a comfortable weight load for this pack?

HAhaha, I was wondering how you'd sneak the map into this review! Well done Jim!

Alicia, it starts getting uncomfortable once you cross the 10 pound mark.

Solid review Jim! Thanks for sharing.

Great video, Jim. I'm not a skier. So the video was enjoyable to watch. (I'd love to see a comparison video with a GoPro to see how the shaking changes.)

Nice review, Jim! I had been really interested to see how the smartphone holder would work on this series of packs. You make a really good point about having to take out the phone and put it back in to use it. Maybe if they made the front piece light plastic like an Otter Box so the touch screen could be accessed it might be easier to use.