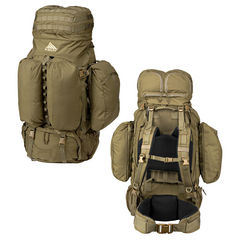 I am active duty military (Army) and i bought this pack in 2007 during a rotation in Afghanistan. Let me start by stating that this pack is HUGE. And I mean Huge. This is both a curse and a blessing, as if you aren't going to be hauling a ton of stuff this pack is pointless, however if you have a packing list that includes the kitchen sink, as mine often did, then this is great.

I was in an 81mm mortar platoon, and I would take off the side pockets and use the net webbing at the base of the sides along with the side compression straps to strap down 2 81mm mortars to the outside of the pack for ease of access. I also purchased the radio holder which is designed for the AN/PRC-117 series radios. It does not fit the PRC-119 or the new PRC-117G radios, but it will hold a PSC-5 (a little big but it works).

For a heavy load, the large padded waist strap is great, however with body armor is all but impossible to get it situated on your hips correctly. Without body armor its great.

This pack is a mix of cordura and nylon. I wish it was 100% 1000 count cordura, as that has become the standard for durability. Often carrying over 100 lbs of gear on extended missions, trying to drag that pack off a crowded CH-47 in the darkness of night has left me with a couple of holes in the pack.

Overall I really like the pack, but Kelty pretty much just took their civilian hiking pack and made it brown. In the military, we pack gear that you don't think of when your hiking for a weekend getaway. Radios, mortars, batteries, machine gun tripods, etc...The pack needs to be 1000 count cordura to fully stand up to those rigors.