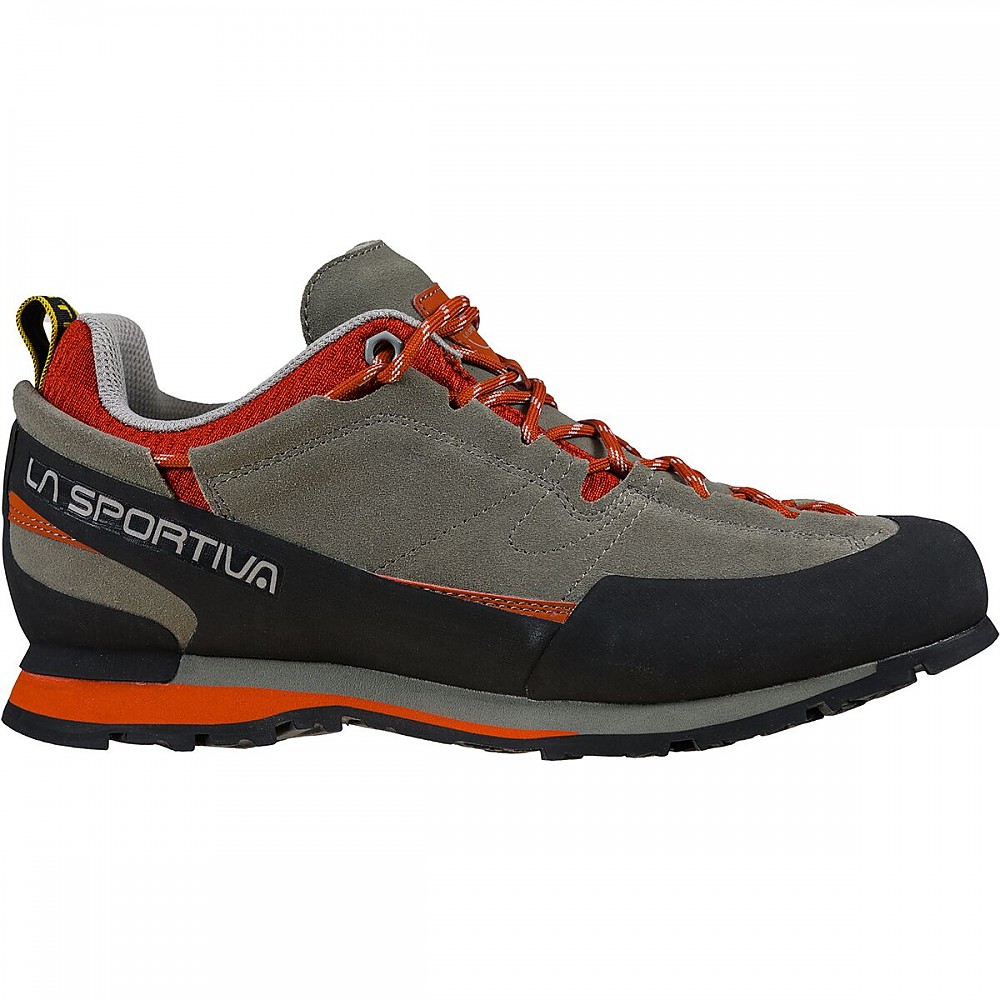 I really wanted to like these shoes, but had to return two pairs due to the inner-lining splitting/ripping. Maybe just bad luck?

I really wanted to like these shoes, in fact when new I utterly loved them, for the first 50 miles.

They simply started to wear too fast — not the sole, but the inner lining. My first pair the lining split open at the heal, and the second pair it started to go in the same place before I quickly gave up and returned them. Currently looking for a replacement, most likely the Scarpa Ascent.

The rubber, combined with the almost "climbing shoe fit" and the lacing right down to the toes is just awesome. No issues with even "heavy" edging, i.e., with a pack on.

The lacing is maybe a long term weak point? That is just an observation, as I quickly returned mine with the faulty/split lining, but the lacing seems that it may pull out of the leather after long use.

The sole tread pattern is great, loads of grip although most suited to drier conditions. In the wet I'd put them in the "ok-good" category.

I found the shoes pretty warm/hot on the feet and not able to breathe very well. They also let the water soak through, even in wet grass.

Like first said, I tried hard to like these shoes; they do tick all the right boxes, just a few niggles to consider. I gave them 3.5 stars just as that rubber and sole is so great in the dry, and the fit.

More comfortable than the majority of other approach shoes and holds up to some strenuous wear.

Let me start I by saying that even the thought of purchasing shoes online having not tried them on terrifies me.  Perhaps you know the feeling too. How many experiences have you had where you see a pair of shoes online, spring for them and anxiously await their arrival only to receive them and find out that the styling isn’t what you thought, the sizing is off, and the shape of the shoes doesn’t match your feet?

I’ve had too many to recount, so I generally stay away from making such purchases. I do, however, conduct most of my window shopping online prior to making purchases. Each time I have, I’ve found that my first pick is generally not the best fit, which only adds to my aversion from online shoe purchases.

Thankfully, when it came time to purchase a new pair of approach shoes, I had the luxury of trying on multiple pair in-store to get a final read on what would be best for my needs. On my store visit, I tried on the Boulder X along with several other La Sportiva and Salewa models. I was pleased because not only did I like the general styling of the Boulder X, but they were significantly cheaper than several of the others I had considered.

The shoes have held up. I have been on strenuous hikes and a few canyoneering expeditions and have experienced positive results. The shoes have overall good support and reinforcement in all the necessary places — toes, sides and heel.

I initially noticed a subtle hot-spot on the back of my heel, but that was fixed when I adjusted the tightness of the continuous lacing system. I have since also adjusted the tongue from being laced under the side flanks to being laced on top of the side flanks. I have found that this helps prevent from debris entering the shoe and also relieves some of the pressure caused by the laces.

One thing that I would note is that the shoe does not have much breathability. There is not ventilation in the shoe and as such, it can be quite warm. I have used these shoes in desert environments and they can get pretty hot.  Also, due to the lack of ventilation, the shoes take a while to completely dry out when they get wet, which can be quite annoying if you’re trekking through damp areas.

Overall, I’d say that these shoes are well worth their price point. They handle varied terrain well and are comfortable for short and even longer hikes/treks.

Excellent shoe! I used them on the outdoor for 20 miles and didn't feel anything in my feet. I recommend it a lot.

The fit is OK. They're really comfort and the support it's OK. Don't try them in the rain.

For me these are wonderful shoes.