The Sonic TR has been discontinued. If you're looking for something new, check out the best trail running shoes for 2022. 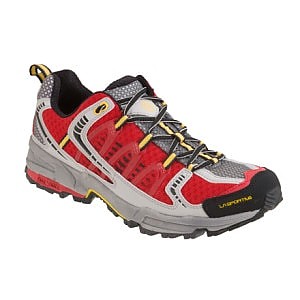 Stable, solid, secure, strong. This is how I thought of the La Sportiva Sonic TR women’s trail runners after every run. The Sonics have excellent traction, stability, and control, and despite being 12-15 percent heavier than my usual Nike trail runners they didn’t slow me down. The Sonics are well-made, quality trail shoes. The one feature I repeatedly found lacking as I pounded down trails and over rocks was cushioning, and for some, like me, that may be a deal breaker.

Out of the box I immediately was taken by the Sonics’ good looks. They come in an attractive light blue and grey color combination and struck me as solid, technical, and capable. In a store I would definitely pick up these shoes and check them out.

The first feature I noticed was the Sonics’ aggressive tread. The sticky rubber outsole sports little dots for grip, beefy lugs to grab hold of the trail, and a deep-cut heel that bites into loose terrain for downhill control and braking. The rubber toecaps provide protection against rocks and stumbles. The Sonics look ready for anything on the trail. In fact their build and weight struck me as being closer to a hiking trail shoe than a trail runner. I worried that they’d slow me down on runs. I’d be proved wrong.

From my first rain-slicked trail run, I discovered that the Sonics have exceptional traction in a range of trail conditions. The more I used them, the more secure and confident I felt, whether running across wet rocks on a rainy day, down a trail covered with layers of dry, slippery leaves, or over a muddy, pot-holed, dirt road. I found that I could maneuver downhill and around tight corners without skidding or flailing. I felt like I could run across or through anything, braking or speeding up on the fly. The Sonics’ traction offset any concerns I had about a heavier shoe slowing me down and allowed me to run some of my regular trails faster than usual.

The Sonics are sturdy, very sturdy, and whether that is an attribute or a drawback depends on what you need from a trail runner. If you need stability and pronation control you are in luck. The Sonics are strong and stable and will hold your feet securely over miles of rough terrain. While La Sportiva is known for narrower, lower-volume shoes, the Sonics are built on a women’s-specific last and my EU 38 Sonics felt a little larger than my usual trail runners (*See note below).

Despite that room, my feet never moved around once laced up. The shoelaces tightened easily and stayed snug during my runs, helping secure that fit. However, the laces that came on my pre-production shoes were overly long and often whacked annoyingly against my ankles. Generally this wasn’t a problem, but when I ran with YakTrax Pro traction devices on one winter day, I worried about the YakTrax catching in the opposite foot’s lace loops. According to La Sportiva the laces are being shortened for the production models, so this may no longer be an issue.

The partial mesh lining and the foam in the heel and tongue are designed to dry the shoe out fast in wet conditions. During several fall runs I stepped ankle-deep or further into puddles and while water flowed right into my shoe, it also flowed right back out. My shoes and socks dried quickly and I was left without a squishing sensation.

The Sonics have a lot of great trail-running features, but ultimately for me it came down to cushioning and comfort. If you need or want plenty of cushioning in your running shoes or are prone to shin splints or other overuse injuries the Sonics are not for you. Regular runs, on which my legs had felt fine before, occasionally brought out latent ankle, shin, and knee pains. They weren’t debilitating, but I became hesitant to use the Sonics daily and risk an injury. After nearly every run I thought, “if only they had more cushioning…” And despite “flex grooves” in the forefoot, the Sonics’ sole still felt too stiff for me, often making the balls of my feet sore. An after-market insole could alleviate the problem for some.

Overall, the Sonic TR women’s trail runners are well-made and have a lot going for them—great traction, stability, protection, and a secure fit. While they are sold as a mountain runner for dirt roads and trails, their rugged tread and versatility also lend themselves well to hiking, provided you don’t need waterproof protection. I wanted to love them for all of those reasons, but the little aches and pains in my lower legs wouldn’t let me. For me, cushioning was the deal breaker. If I could just get the Sonics with a cushier ride they would be my day hikers and rugged trail runners of choice.

A Note on Sizing: I wear a women’s size 7 U.S. and was a little leery about wearing size EU 38 Sonics since most charts convert my size 7 to an EU 37 1/2. Wrong size, I assumed of the Sonics. However La Sportiva converts a women’s 7 U.S. to EU 38-38.5, and the size EU 38 Sonics felt about right to my feet, with just a tad more room than usual, but not too much. I wouldn’t have wanted to size down or up.

So check the manufacturer’s sizing information first when sizing shoes, especially when converting sizes. In this case, La Sportiva’s sizing info was correct, and the generic conversion charts were not. A good fit is essential with all footwear, so take the time to find your proper size and, if possible, try on several sizes of the same shoe.