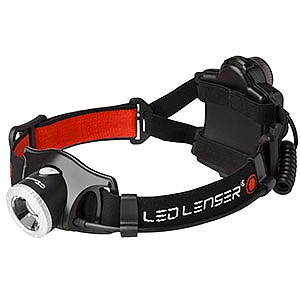 These are great headlamps. The new LED Lenser H7.2 and the upscale H7R.2 bring even brighter adjustable top range illumination.

The new LED Lenser H7.2 replaces the H7 with a 250 peak lumen rating (300 for the H7R.2). At maximum setting it is rated at 175 yards, which I have found to be accurate with fresh batteries. The newer model takes four AAA batteries, one more than the older H7.

With any battery powered device you have to accept that most of the time it operates somewhere less than full power but, my headlamp has shown a surprisingly long useful life between needing new batteries. One reason for the long life is because I usually do not need the full brightness.

One of my favorite things about this light is that it rivals some of the very high end heavier headlamps in both quality and performance. I use it mostly for hiking and walking the dog at night along the trails in the forest out back, but I find it's also my go-to light when I'm working with my hands or out on the boat.

The adjustable lens allows quick transition from wide angle flood to focused beam for spotting. A focus ring on the lens replaces the toggle on the older H7. The lens also tilts with positive stops for reading or cooking at camp.

I find the brightness adjustment to be one of the best features. Most of the time I do not need the full blast of light available at the highest setting, only for spotting at a distance. Usually while hiking I set the brightness mid to low range. Not only do I extend the battery life, but I find it more pleasing. It is also more friendly when you meet up with someone to be able to quickly dim your lamp so as not to dazzle them.

A soft rubber water resistant boot makes changing the batteries is easy. After having hiked and paddled in all sorts of weather, the light has given no problem with water or cold. The specs actually claim the headlamp is submersible, although I have not put it to the test.

Comes with a 5 year warranty.

Sounds like a good headlamp for the price, Steve. Thanks for reviewing it.

I checked out their website. Interesting that this is a Leatherman subsidiary company. The model you posted seems to be the in between for their low and high lumen options [25L@$30-2000L@$330]. Thanks for bringing this company to light for me. No pun intended.

Thanks for pointing out the Leatherman connection, Jesse. I updated the brand's info on our site to reflect that: https://www.trailspace.com/gear/led-lenser/

This headtorch is a lightweight, high performance piece of kit for hikers/cyclists/cavers/those requiring a reasonable amount of light coupled with credible battery performance. It's not the cheapest light you can buy, though, and could do with adjustment on some minor points.

Just to make the point, this head torch was a replacement for my H7, which unfortunately failed the test of duty when it was wanted. So I downloaded a warranty form off the LED Lenser website, sent it off with the H7, and a few days later a brand new H7.2 (worth a fair chunk more) arrived in the post. Thanks, LED Lenser for the great customer service—trouble free, easy, and no quibbles.

Now the H7.2 has never failed me yet, which is good because I happen to do a fair bit of caving and that is when you do not want your light to bust. But I've also used it for bike rides, running, and hiking as well as working—such as fixing a PIR light under the eaves while up a ladder. And it's come through unscathed, so I'm happy.

Its performance seems to be as stated on the box, although I find that I tend to change the batteries far sooner than the official battery life—remember, that's down to 1 lumen. And on the point of batteries, I think LED Lenser could do something better for the battery compartment on this one. The rubber inside piece just pushes on to the battery pack, with no real fixing. Yes, the head strap holds it in place, but there's not really a decent seal and I get the impression it would be easy for the cover to loosen. Having said that, I've never had a problem with it.

I've mentioned adjustability as one of the pros for this light—and that's in more than one way. First, the headband can be adjusted to fit around big heads (like mine!), and the wire is partly coiled to aid this; the actual lamp part is tiltable (and DOESN'T move once tilted—something I rate as very important, for example, when running) and can be moved around the strap.

However, the lighting itself has a range of options; high power, low power, strobe, transport... and don't forget that in all modes (apart from transport lock, which by the way is very useful when carrying around in bags) the light output can be totally adjusted with the wheel on the battery pack e.g. if you turn it on in 'high' mode, you can turn the output right down to 'low' without ever changing  modes. And in strobe, that same wheel will adjust the frequency of the flashes. Cool eh?

Welcome to Trailspace, Rick! Thanks for sharing a helpful review of your H7.2 headlamp. I'm sure others would be interested in seeing some pictures of yours if you're willing to share some in your review.