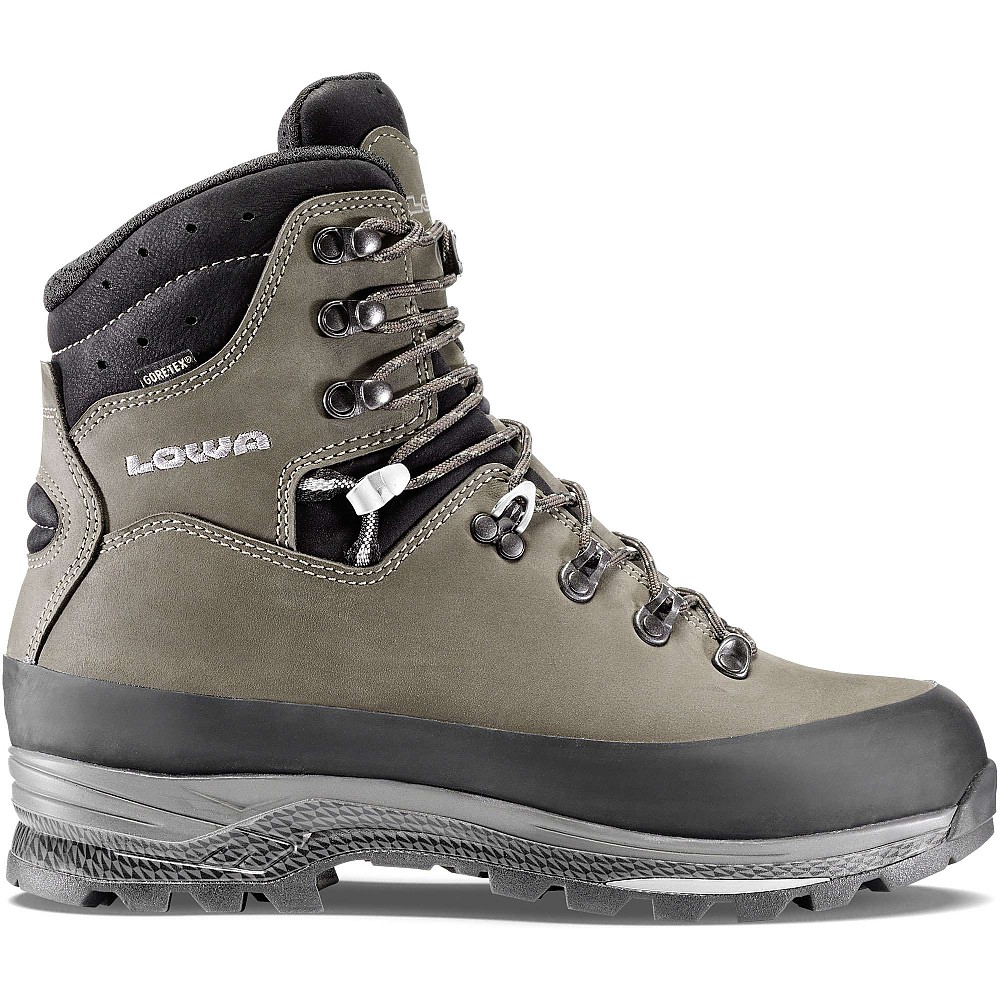 These are the most comfortable boots I have ever had on my feet. BUT...they leak.

These are the most comfortable boots I have ever had on my feet. BUT...

After about a month they leaked. The bottom of my right foot started to get a bit wet when hiking on wet terrain, and within three months of having owned the boots I had to dry the boot out with newspaper stuffed inside the boot after nearly every use.

I contacted Lowa and despite it only being three months in they were very hesitant to help. First question asked was, "did you put any sort of treatment on your boots other than our own Lowa product?" They said if you did the warranty is void, and if you did not then we would like to see the condition of the boots as they may not have been taken care of.

Lowa only offers a one-year warranty and most companies offer more than that. For this kind of money, I didn't expect them to leak after light use so soon, nor did I expect that kind of poor customer service.

The company where I bought them took them back no questions asked and gave me a new pair, but be aware, after reading online what I have now, I wouldn't have bought these boots. They are known for leaks. Buyer beware.

Lowa's warranty is horrible and I am lucky I bought them from such an awesome retailer who backs what they sell.

Quality, durability, comfort, and protection. Very good three-season backpacking boot as long as it fits! Toe box could be bigger, I was surprised to lose a toenail after a rough tip on the Lost Coast in N. California.

I would recommend these. I am mostly satisfied with them. These were closeouts so I may have an earlier version of these boots.

I thought the fit was fine with no blisters or issues until I lost a toenail on a long rough trip (for me). I have stuffed tennis balls in the toe boxes and there does seem to be a bit more room now. 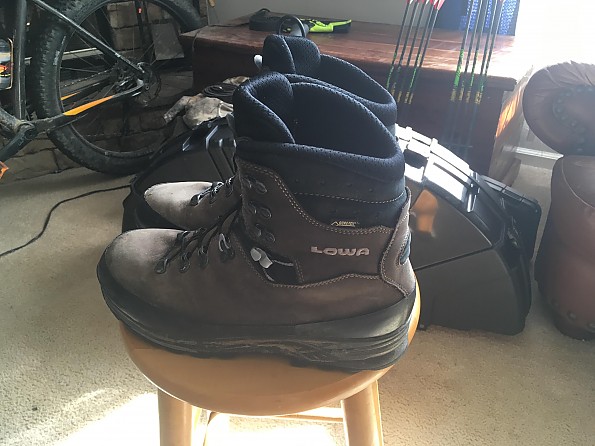 Due to a crush injury to my right lower leg I have an extremely hard time finding boots/shoes that help with the pain from crushed nerves.

That being said! I found this pair of boots at a resale shop new in the box and unworn, for $25! They fit perfectly! The owner had received them as a gift and never tried them on.

I started wearing them everyday to my hunting lease, rain or shine. I've never had a pair of boots that compare! I mean, I've worn Rockys exclusively due to two styles that fit. I've worn these boots everyday for the last six months for an average of ten hours a day. I'm in East Tennessee and our climate tests the best of boots, and these boots still look nearly as good as the day I pulled them from the box.

The lacing system totally allows for support of my lower leg, ankle, and foot. Nothing else can compare.

I have ordered another pair for myself as well as a pair for a hunting buddy that got his leg messed up in the Middle East from an IED.

Reviewed by
The Vigilante   +20

The first pair of Lowa boots I purchased were the GTX Mountain Hunter. However, that boot being insulated proved to be too warm for the bow season. So I found a pair of Tibets and purchased them.

After about 3 years they developed a leak. I took them to a Lowa retailer, not the one I purchased them at, and they helped me send them to Lowa to see if it was a durability issue. It was, and I got replacement boots.  :)

However, I decided to purchase another pair also. These are my go-to boots down to 20° F

I bought these boots as a semi-rigid boot for general alpine use. After a week walking around town, I took them for an easy 2-hour hike. That was enough to break them in sufficiently for a 9-hour T4 hike on mixed rocky ground including VF in the range A-C and some grade I climbing.

The boots felt good, comfortable and though the temperature was more than 30°C, and we were approaching the peak from the SE with the blazing sun being mercilessly bright, my feet never felt too hot. I always felt quite comfortable with respect to balance and grip on both the rock and the metal studs and ladders.

Finally, the boot is quite sturdy and inflexible. It only bends slightly when you put your full weight on one foot, but on the other hand they are not too uncomfortable to run in should you want to. Finally, they can take a crampon, so they should be usable on glaciers as well.

I cannot say anything about their durability at the moment, though the rubber outsole seems to have already been visibly worn somewhat.

(A year update) One of the most excellent boots I've had in a while, which I bought as a tougher replacement to my Scarpa ZG20.

Fit and Stiffness: These are supposed to be backpacking books, so they are pretty stiff—just a notch softer than mountaineering boots. They are nevertheless even sufficiently comfortable for brief runs if necessary. The lacing system is superb, allowing you to tune the tightness of the upper and lower parts separately.

The upper part feels comfortable when you let it loose.

The width of the toebox is average.

Terrain: The boots feel secure in trails, on rocks, on scree, on snow (ankle-deep), on via ferrata and grassy slopes. Haven't really tested their waterproof capacity.

Durability: I have only had them for a year, but they still look great. Outsole is holding up.

These boots work great! I have had them almost two years and probably have put 800 dry and comfortable miles on them. They are the first boot I've had that has kept my feet dry from tromping through wet slush all day!

I'm a large format (4x5) landscape photographer, and I usually carry about 60-65 pounds for 4-5 day trips, maybe a bit lighter in the summer, and lighter yet if I can find someone to go with me and I can make them carry the tent, cooking stuff, and other crap, but most of the time it's just me.

Anyways, I put a lot of stress on boots, and these have held up the best, and I see myself using them for another year or more. I would not get them resoled, only because I have had bad experiences in the past with resoling my boots.

To date I have put roughly 200 miles on these boots from moderate trail hikes to bushwacking/mountain climbing in British Columbia and they have performed superbly. I have a wide, lower volume forefoot and a narrow heel and they fit great (the European lasts are reputed to fit a wider variety of feet than the U.S. lasts tend to).

The downside is that they are a stiff boot and a bit on the heavy side (4 lb. 6 oz./pr in size 11M) due to their contruction, but for carrying a heavy pack in rough terrain/off-trail travel they are excellent. As such, some folks might not care for them as an all around boot.

I liked them well enough that I bought a second pair just in case Lowa changes/discontinues the model.

Serious hiking or backpacking boots don't come any better than this.

The Tibet GTX is a serious piece of equipment. Excellent support and comfort with no breaking-in needed. Yes, they are heavy, but no more than to be expected with boots of this quality. The water resistance is also very good; my feet have stayed consistently dry.

With boots weighing in at 1 kilo each, clearly they are more designed for winter than for summer wear. That said, they have never felt unduly warm. The new Lowa lacing system with a "lock" function helps greatly when adjusting the fit.

I haven't had these boots for very long; but my previous pair of boots were also Lowa; and I wore them in all manner of conditions for more than 10 years. I perhaps should add that the Tibet is not a technical climbing boot, but can certainly be used for light climbs and scrambling.

I am an experienced all-weather mountain hiker.

Best boot I have ever placed my feet into.

As the song says "simply the best." If you find a better boot buy it! I know you won't, these bad boys will keep your feet dry and comfortable while backpacking or hiking.