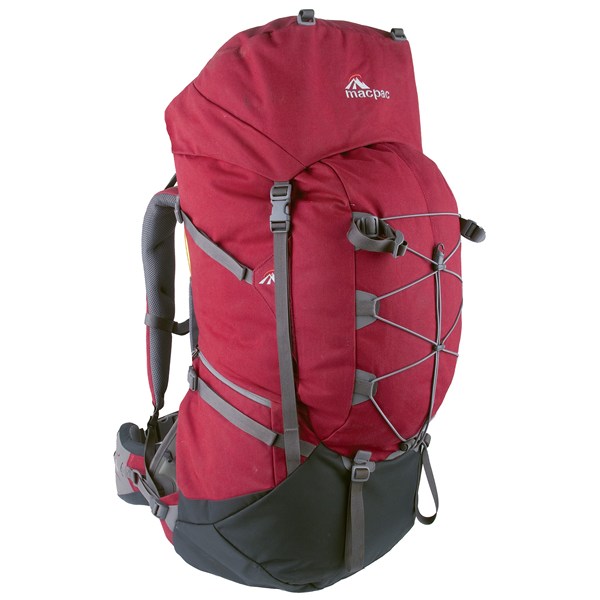 The (old skool) Macpac Torre is one tough mutha... you'll need to include it in your will!

The Macpac Torre model I have is slightly different to the current version - I bought it waaay back in 1995!

Over the years I have used this pack for everything from overnight trips in the local hills, week long wilderness tramps in New Zealand, Canada and the US, a six month overland backpacking trip from London across Asia to Singapore, climbing and ski-mountaineering in NZ, North America and Europe — and much else in between! While it may not have been to perfect pack for any of these activities, it did handle them with ease and I never experienced any problems (except in one instance — see below).

My Torre (size 2), made in NZ, has an earlier version of Macpac's Dynamic harness and is of a single sack design (ie no botton zipper entry or internal devider for a sleeping bag), and instead of a rear pocket, has a kevlar crampon patch (with bungee cord). I have also sewn on a couple of gear loops onto the hip belt for racking carabiners etc while climbing.

I have found the pack to be very comfortable, even when overloaded with climbing gear and food slogging up the Tasman Glacier. The pocket in the lid is generous enough to carry all the odds and ends you need easy access to throughout the day, while the main body will swallow all you need (and probably more). The ice axe loops and crampoon patch while simple are both very effective, while the side compression straps are effective at carrying extras from your sleeping mat, tent or skis, and can still cinch the pack down to a managable size for day long summit pushes etc.

The cotton/nylon (Aztec) fabric, in addition to being pretty much waterproof, is damn near in-destructable. So while the pack will weigh a bit more than a nylon competitor, it will outlast it many times over.

Having said all of that, I have had two minor issues:

1.  The shoulder straps do tend to slip over the day, which is a bit of a pain, and

2.  One the plastic sleeves in the shoulder straps that hold the lower strap to the metal stay (frame) came apart (after 16 years of use). Bit of an issues as I was five days from the road end at the time, but it was easily jerry-fixed with a zip tie. I was able to buy a replacement strap easily from my local outdoor shop.

Overall what I really like about the Torre is that it was obviously designed and made by people who actually use the kit themselves — there is a refreshing lack of useless bells and whistles. Instead you get a well throught-out simple and robust pack that does everything it should!

After 18 years of pretty heavy use, the pack is not even close to being considered for retirement!

I don't know if the new Macpacs made in China and Vietnam are of the same quality as my old version, but even if they lasted half as long, you would have done very well indeed.

This was (is) my very first overnight pack purchase. I tried a few different types/brands, before deciding that spending a few extra dollars was worth the difference: being comfort and quality (and re-sale value if you want to off-load).

I purchased an 80L pack which was a bit extreme, as I am not a big person, but this pack has been with me around a reasonable amount of Australia, on some long treks (up to 15 days continuous) and the comfort level never changes. I have several other packs, of different volumes and brands (all quality) but always revert to this pack for reliability, comfort, ease of packing, ruggedness and basic quality.

The only reason it doesn't rate a full 5 star is that it is still heavier than other packs; and I expect Macpac today has a pack of similar calibre that would fulfill this requirement. Trouble is, this Torre I have won't die! I love it dearly. It was the first quality item of some expense that I have never regretted purchasing.

I know it sounds like an overused sentence but... this has got to be the best all-round pack in the world! Tough, durable, functional, very comfortable and waterproof. I've done river crossings, had it fall down a 50-metre vertical cliff face and land on stones/rocks, and even my friend's Jeep ran into it without even the smallest of problems.

You can keep your LAlpine's or Kelty's or whatever. Macpac has got to be the best producer of backpacks in the world. Don't take my word for it. I ended carrying up to 36 kg of weight doing a Southern Alps traverse in NZ and it was comfortable all the way. Buy one now and never look back again!

I've had the Torre for about three years now and I like it a lot. It's very rugged and functional but not especially light. I have an older model with the 'dynamic' harness which isn't supposed to be as good for heavy loads as the newer models (which have a more rigid system). It still does OK with heavy loads, it's just a bit unstable.

I use it mainly for extended tramping/bushwalking/backpacking and ski trips. It's OK, but a bit big for hut-based climbing. Probably best suited for more extended transalpine trips.

As with most macpac stuff the quality is very good.

While the Macpac range is local firm I thought that they have a place in this review.

The last one was still going strong thanks to their 100% lifetime replacment policy...blah blah. But the newer models have a much harness. The Torre is an 85 litre general purpose mountaineering, hiking pack. It has good attchments for crampons and ice axes and genrous room in the top two map pockets. I feel their best selling point is their toughness. I put my last one through hell. It is still smiling.

The pack comes in two sizes for both the under and overtall person. The pack is fully adjustable.

This is the best pack I have tried.