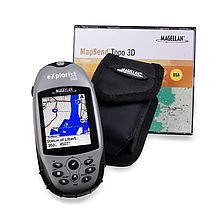 I bought the unit a few years ago, when it came out. It was never user-friendly and tech support was nil. I threw it in a drawer and did not use it as I had planned.

Now it seems Magellan has abandoned the Explorist line. Even the terrible tech support is gone. Run away from Magellan as fast as you can.

Try as I might, I honestly can not find anything positive to say about the Explorist 500 LE, or Magellan for that matter. My GPS was purchased new in 2009 as a gift from my wife, and has never even made it into to the field. It has had issues from nearly the first day out of the box. Magellan tech support has been wholly ineffectual. A combination of language barrier (tech support outsourced to India), thick accents, complete lack of troubleshooting skills, and a complete breakdown in ability (or desire) to follow up, has resulted in my writing Magellan off completely and permanently. The unit cost, $179~. Accessory purchases including a soft side case, auxiliary swivel mount, a 2 gig SD card, 2 Lithium ion battery packs and a wall charger ran the tab up by another $75~. Total price of admission; a tad over $250~. And then there was the Map Send Topo 3D to the tune of another $100~.

Problem? The GPS fails to communicate with the computer (actually three different computers) running various Windows platforms including XP, XP Pro, Vista 64 and Win 7. Simply, there is no way to load the Map Send software onto the SD card and as such, one is stuck with their next to useless base map that is factory preinstalled. Despite countless hours on the phone to tech support, more emails than I care to count, and more broken promises by Magellan than Carters had pills, I am still left with a useless piece of technology.

I've recently spent some time reviewing others complaints and it seems that an Explorist 500LE that performs to designed intent is an exception, rather than the rule. Today, after over one year of trying to work with Magellan and obtain the promised exchange, I've resigned myself to having been burned. Bottom line; steer clear of Magellan.

Overall I would say that I really like the unit. Ease of use rates high as does accuracy and dependability. I use it for hunting, camping and geocaching.

The main problem that I have is with the street level detailed maps (mapsend). The software is problematic and never wants to work no matter which computer I use. I always have to resort to having one of the IT guys from work get it to function or call the Magellan help line.

It would be nice if they could make it more functional so you just put the disc in and it would work.