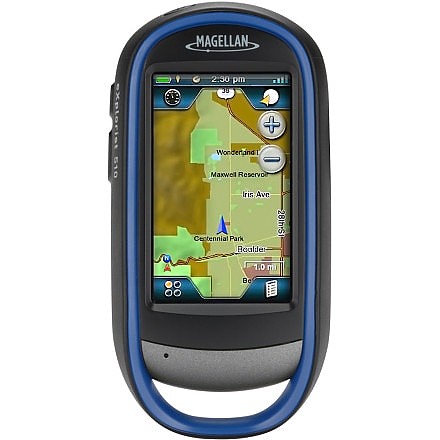 Not recommended at all. I use GPS receivers for hiking and geocaching. What counts for me are accuracy, ruggedness, ease of use, and handling. While the eXplorist 510 shines in one, it completely fails in two categories.

I had been using a Garmin GPSMap 62 for two years that I ended up giving to my wife. After some heavy research, I bought the eXplorist instead of another Garmin (it would have been a Colorado), because some geocaches require frequent input of text, and the rockers used on the GPSMap make text input difficult.

Since Magellan is hard to source in Europe — where Magellan apparently performed poorly in the past in the areas of software support and customer care according to several reviews — I could not actually try the device before purchasing it. But most reviews were quite favourable, so I bought it online. Upon delivery, I was pleasantly surprised. The device comes neatly packaged, the manual is adequate, and the hardware feels good in your hand.

Vantage Point, the software that comes with the device, was the first disappointment. While it installed easily enough on WinXP and Win7, its user experience was a significant step down from Garmin's BaseCamp.

Here are some of its quirks:

Vantage Point is slow, its interface is everything but intuitive, but at least it handles OSM maps adequately. Which is nice because Magellan offers no maps with turn-by-turn navigation for the European market. That's right: you're looking at a device that doesn't offer turn-by-turn navigation in Europe. Prices are interesting for Magellan maps, too. We had a brief look at their UK offering and were unpleasantly surprised to learn that a 50k map costs about as much as another eXplorist.

Since we still have the GPSMap (for which several free, routable maps exist), the lack of turn-by-turn navigation is not a show stopper for us, but certainly for many people who want to use a GPS device for more than hiking (if even that). Still, creating routes isn't possible. Additionally, routes created with BaseCamp couldn't be transferred and still work.

The German OSM maps have to be bought separately unless you want to spend hours compiling your own. http://maps4me.net provides excellent maps, though, and the money for the subscription to their service is well spent. Map display on the device is usually good, unless you crank up details in urban areas, in which case the device display slows down to a crawl.

That said, the pre installed World Edition includes a complete road network and is a lot better than Garmin's.

As stated previously, the device feels nice to the touch. Hefty but not heavy.

The device has a Sirfstar III GPS chipset, and its accuracy and consistency are very good (Magellan claims up to 3-5m, and that seems fairly exact). It is also WAAS/EGNOS/MSAS compatible.

The 3.0" Touch Screen has a nice size. But it fails quite miserably under direct light - a feature not uncommon with touchscreen devices, but still a major disappointment. Additionally, it is extremely prone to scratches, something the T5 cachers should definitely keep in mind. I urge anyone to buy protective foil for this screen.  On the up side, the touchscreen is reasonably responsive and can be used with gloves. However, due to the placement of several key touchpoint areas in the corners or at the bottom of the screen, it is also unnecessarily difficult to use (see firmware below).

The battery lifetime is more or less adequate. But when used in sunshine, the background lighting has to be cranked up fully which has a negative impact on the batteries for obvious reasons. Still, 4-6 hours with Eneloop rechargeables were the average - as opposed to 16 hours using two AA batteries as claimed on the manufacturer's website.

The built-in Integrated 3.2 mega-pixel camera is a joke. At a time when even the lowliest smartphones come packed with good to excellent cameras, what were the Magellan people thinking? Despite its decent technical specs, it fails in many lighting conditions. It is also so slow to load that we have started bringing a dedicated outdoor camera and running the resulting images through Garmin's PC software to — quickly and easily! — add GPS coordinates to our images.

The sound recorder is great if you intend to make threatening phonecalls. Meaning, it performs terribly. My idea was to be able to  record — not jot down — cache hints while climbing. Well, if stealth is required, that is not an option, because you need to literally yell at the device to be able to understand anything during playback. That is because the speaker is a nightmare. Tinnish and simply bad playback make it next to useless.

In theory, the firmware it is quite nice, especially for geocachers. Unlike the Garmin GPSMap, it can hold thousands of geocaches on its SD card (not included). Caches can be imported from and exported to this SD card. Cache management is pretty well thought through, offering more than 20 unique characteristics of each cache, and allowing you to sort and filter to your heart's content. Add the spoilersync software and macro for GSAK, and GSAK's ability to upload cache images, you have a seriously useful device for  geocaching. In theory.

In reality, the firmware has a truly sluggish responsiveness. Given that I bought the device in order to be able to quickly input text and coordinates, this is actually a showstopper. Particularly annoying is the load time for entering waypoint co-ordinates. Entering a set of co-ordinates can take up to one minute, 50 seconds of which are spent waiting for the next screen to finally materialise. For unknown reasons, the screen responds faster when using a stylus, but that somehow defeats the purpose of having a touch screen. Also, the Garmin with its comparatively cumbersome rocker input is actually faster

Other firmware failures in no particular order:

In short, the eXplorist's firmware is the worst I know in the current market.

Durability is another issue. The screen scratches extremely easily. Had I know just how easily, I would have bought protective foil. My device is now 3 months old, and has 4 heavy scratches. When I approached a Magellan salesperson during a major geoaching event last month, he basically told me that that was my problem and there was nothing Magellan could do about it. Mind you, we're talking about a €300 plus device, and the manufacturer refuses to replace a protective sceen cover worth maybe €3? That is ridiculous.

On a tangent, the Garmin, which was  exposed to exactly the same environments, only has a few minor scratches. The same goes true for the body of both devices — the Magellan looks as though it had been in a war zone for months, whereas the Garmin still looks decent.

To sum this up: The Magellan eXplorist 510 is a great device in theory. On paper, its technical specifications, software and firmware features, and handling offer a fantastic value for money. In practice, it is slow, cumbersome to use, effectively lacks turn-by-turn navigation outside north America, and is prone to damage. Add to that sub standard customer support, and you know why Garmin is the manufacturer of choice for so many people.

Personally, I would not buy this device again, and I would not recommend it to anyone, either.

Don't buy one !!!! They have random PCB problems.

Take them back while you have warranty and it's not the suspend mode or the screen capture.

The Magellan eXporist 510 is a very rugged gps. I have had it under water, and in the mud. Still works like new will not go anywhere without it. Very reliable and accurate.

We use our GPS to geocache, hike, and bike. We have used many other brands, but this one is the most versitale. One device can do it all. Go from the car to the trail. On the trail it will stop for a sec then back to normal.

Love it and would highly recommend.