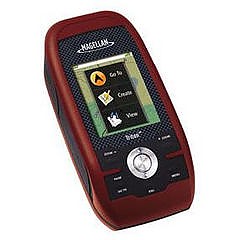 This thing looks like a good deal at first, but it seems nearly impossible to load maps with any useful information on to it. They claim that it comes with a "base map" of the U.S., don't plan on using it though. It only shows major highways, and doesn't even get those right.

I was just very surprised to find anyone would make a gps with a color screen that couldn't hold maps.

This thing looks like a good deal at first, but it seems nearly impossible to load maps with any useful information on to it. They claim that it comes with a "base map" of the U.S., don't plan on using it though, it only shows major highways, and doesn't even get those right.

The Magellan website offers almost no resources for fixing the lack of map detail as far as I can see, they seem to offer one map pack compatible with the 200, it'll cost you $80 and there don't seem to be any guarantees that the maps will actually fit on the measly 9mb of memory installed.  I've spent the last Two days trying to make this thing something it's not,..usable.

I shouldn't say that.. it is usable as a super basic device that can tell you your Latt and Long, maybe what time it is, maybe you could defend yourself against a mountain lion by throwing it.

Which brings me to "Tritonforum.com" Sounds like a place where you might find some help right? WRONG!  Seems the moderators are such fan boys that they delete any posts that might actually help people circumvent Magellan's crappy support, threads like "where to find maps for Triton 200" seem to be gutted of any useful information then locked, if you get one of these things good luck, because you're on your own.

This is my first gps unit so maybe I'm being a little hard on this thing, it is something like five years old now.  I was just very surprised to find anyone would make a gps with a color screen that couldn't hold maps.

After 2 years trying to get this piece of trash to work I’ve given up and thrown it in a drawer, eaten the $129 purchase price, and sworn never to buy anything from this outfit again.

Firstly, if you are a first time gps buyer (like I was) don't be fooled by the image on the box or used in Magellan’s advertisements. The unit only comes with a "base map" that is absolutely useless as far as I'm concerned. The “base map” is basically a flat grayish-green background completely devoid of any detail with a very few red lines (major freeways) depicted and a sparse sprinkling of dots (with city names) not the colourful, detailed topographical map you’d expect from the image on the box and used in advertising.

In order to have any usable map detail with this unit you'll need to buy various add on, after market "topo" maps (ranging in price from about $30 to $100), after purchasing these add-ons you’ll have the challenge of trying to download them to the unit.

If you are successful in loading the add-on maps to this unit (and I haven't been) you'll soon discover that 10 mb of storage (that’s about the amount of free space for maps, photos, waypoints, etc. that is available on the unit) isn't very much storage and severely limits the device's usability which brings us to another negative issue . . .

Magellan's customer support should be more appropriately called “customer non-support” . . . I haven’t been able to load the add-on maps to my unit mainly because the firmware that runs the software was too old from the day I first fired up the gps and for the 2 years that I've owned this piece of junk I've been unable to upgrade it.

After countless attempts (at various times over the 2 years) to get their customer non-support to figure out why my upgrade attempts continually fail I’ve given up. Not only is their non-support non-responsive but their written instructions concerning the upgrade process don’t coincide with the various menus on the unit, for example to upgrade the instructions tell you to attach the unit to your computer and select “connect to pc” from the connectivity menu on the unit . . . trouble is there is no “connect to pc” selection on that or any other menu.

Additionally I initially tried using this unit mounted on my ATV, which is the reason I purchased it in the first place, and found that (1) the display was almost totally un-viewable in bright sunlight and (2) turned off in a very short period of time . . . both of which make the unit useless in my estimation.

In conclusion, if you’re looking to buy a gps stay clear of this one, purchase one with the facility to use SD or MicroSD cards for map storage and from one of the other manufacturers (Garmin, Lowrence, etc.) who have real customer support and will support you after the purchase.

The user manual was poor. I can't figure out how to change the time. The sunrise and moon rise are wrong. Please e-mail directions on how to access and change these functions.

Although we have 3 Garmins for the cars, this our first handheld. We purchased 2 for Christmas 2007 and had to wait several months before getting them. They arrived as we were leaving the country for a month in Feb. Our 21 day return option went out the door.

From the get go we have had trouble.

-Customer service is nil.
-The downloaded instruction manual is basically a manual of what the buttons are for, not how to program or use it.

-The tech support is useless. I spent weeks on the phone with 4 of them to try and figure out how to program the 200 but the techs knew less than I did. They kept having me go over and over trying something that my buttons wouldn't do. They blamed it on being out of date and needing to upgrade firmware but they couldn't figure out how.

-Advertising is misleading. It is NOT easy to use. Built in "maps" is the basic included one. "Add maps"? I was told that the memory is too small to add maps, maps can't be added to this particular machine, maps can be added with optional cable...I was told the reason I couldn't download was that my machine (new) was out of date and to download firmware updates. Hmmmm there are no updates. What is cable for? "updates only". "Cable is not included" (but for some reason mine came with one). Import data points? Geocache.com only downloads to Garmin. I have been hand entering everything. Techs told me I had to as this is a basic model. (Their answer for everything).

-Disc didn't work or do what tech said it should do with updates. What is the disc for?

Bottom line is DO NOT buy this machine. It has worked for us, and works nicely for what we can figure out, but based on advertisement, warranty, customer service...it gets no stars from me.

Correct advertising and a "user" manual that tells HOW to program would have been nice.
BJR