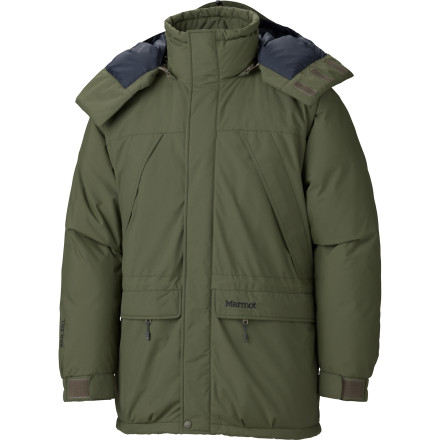 I live in Chicago where temps can drop below zero in the winter and the wind off the lake can be a killer. My old parka was starting to fall apart; it was a pretty cheap one with 500 down fill but did its job. It was not waterproof but the micro fiber shell was soft and all but indestructible. On the down side it was not waterproof.  Alas it was time for a new storm parka.

I had been looking at the Marmot Yukon Parka for a couple of years now. I heard Marmot was an excellent brand and made good performance coats. I usually buy Columbia, good coat for a fair price. I decided the Marmot would be a step up from Columbia so I bit the bullet and bought the Marmot.

The Marmot is now called the Classic Yukon Parka and went through some minor yet good changes this model year. I am about 180lbs, 5’10” and about 48 years of age so I went with the large. According to the sizing chart I was on the smaller half for a large but well within the limits. I also wanted a little room for layering and read the coat ran large. I am an outdoors type of guy and will use this coat from winter camping to walking the dog at night.

The coat arrived in a nice black color, maximum sun absorption I figured for warmth. The build quality is excellent and materials appear to be of very good quality. The shell is very strong and looks like it will be very resilient yet no overly stiff. Snaps, and draw cords are good quality.

The zipper is nothing special and after using it a bit I can say it is junk, it takes 2 to 3 attempts to get it zippered up unacceptable quality for coat a coat of this price. The interior material is very soft, at first I was worried it would ware out soon but after use and closer inspection it is thicker and stronger then its softness would indicate.

The coat design is truly excellent, one of the best I have seen for a storm parka with a major exception I will address later. There are draw cords everywhere to seal out the wind and elements. You have one at the bottom of the coat, one at the waist, one at the top of the inner collar and two on the hood.

There are 9 pockets total with 6 on the outside, two inside and one on the snow skirt. Four of the outside pockets have zippers; the other two are hand warming pockets without zippers which makes little sense to me.  Why seal 4 outside pockets then leave two open to the elements, they need zippers.

The coat has a snow/wind skirt which does an excellent job of sealing out the elements and there is a cleaver pocket on it. This pocket is protected from the elements yet accessible without opening the coat, a nice feature which I can see being useful.

The cuffs are half elastic material with Velcro straps. This works well at sealing out the elements while being very comfortable. While we are talking about Velcro the Marmot uses the Velcro with material type loops that will not lose their grip with time like regular Velcro. The front zipper shield and hood use similar Velcro.

The coat uses 650 down fill which falls right in the middle of down quality (500low to 800high). I have seen no feather leakage and the parka feels puffy when you put it on without being overly bulky. My only concern here is that some areas seem under filled, especially on the shoulders.  A little more fill in the upper areas of the coat is needed.

Now comes the hood, it is down filled and enormous. When I first put it on I thought it was the wrong hood for this size coat. I have a big head but this thing could hold a good size pumpkin. The hood forms a second collar around the coat’s main one and is about 2” taller in the front. You have draw strings on either side but the hood but they only tighten the hood vertically on either side. It doesn’t appear that it will seal out the cold. The hood is the weakest part of this coat. But read on for real world testing.

Despite the perceived under filling of down the coat is very warm but I have notice slight cold spots on the shoulder top and front which is an area the down looked under filled. This includes where the coat meets the collar. I have worn it down to 0 degrees and have been toasty warm but do notice the cold spots. I fluffed the coat to move some of the down up by the collar and it helped, so under filled or a poor design of the baffles needs to be addressed.

This has been one of the best coats I have owned for sealing out the elements. The snow skirt is a real nice feature for keeping drafts out. All access points seal out the elements excellently with the exception of the hood which I will address soon. The coat sheds water well and does appear to be as weather proof as claimed. The arm movement is excellent and does not pull the coat up when reaching. The down filling snugs around you yet there is plenty of room for layering. They really nailed the design with the main coat, just outstanding. Now onto the hood.

The hood is terrible! First it is way too large; this makes a large gap between the hood and head that makes for poor insulation. Wind blows into it very easily even when draw strings are pulled as tight as possible. The front opening is as big as the hood and does not even come close to sealing the hood from the elements. This lack of seal makes the hood a very poor insulator and requires a Balaclava to keep your head warm.

The only plus to this poor fit is that you can pivot your head side to side with in the hood. Most hoods restrict you head movement from side to side forcing you to turn your body to look left or right. Because of the giant size of the hood you can turn your head easily inside the hood without binding.

The draw strings help very little and only tighten the sides downwards, they do not go across the top so the oversize brim never seals with the top of the face/head. Your forehead can get pretty cold, most hoods fold down over your forehead but this hood has an over sized brim which goes straight across making no seal.

As mentioned the hoods collar wraps around the coat’s collar and it about two inches taller in the front. This is OK if breathing trough your nose not really moving around much. If you are active at all with this coat you are breathing into the collar which in short order gets wet from your breath. Even breath through your nose gets the collar wet in short order. This collar needs to be cut down around an inch. You can open the hood to breath normally but then the hood is completely worthless because of its enormous size.

This is truly a spoiler of an otherwise outstanding coat and is puzzling that a company with such a good rep would put out such an obviously flawed hood on a storm parka. In even slight wind your head will be cold. The hood does not seal the sides of your face at all and even slight winds enter the hood easily.

While writing this I decided to call Marmot to find out why this hood was so poorly designed and was shocked with the answer I was given. I was told it was a style issue! Yup Marmot whose reputation was built on technical expertise made this hood like it is for style not warmth. The reps said “most people who buy this coat never wear the hood; it was designed like this for style not for function”.

A storm parka that most people don’t wear the hood??? Apparently Marmot has jumped the Shark and now puts style above function. Before I called them I left a review of the parka on Marmot's web site which just stated the plus and minus with a 3 star rating, they censored the review and never posted it. This is very weak and tells you that the reviews on their web site are cherry picked.

Marmot could fix this critical flaw by doing a few things.

2) Add an inner baffle around the face opening of the hood and run the draw string through it, sides and across the top in order to keep the wind out.

3) Lower the hood collar by at least an inch. Now this may not be as stylish but it will fulfill the promise Marmot makes for this parka to perform in cold weather.

The quality of this brand has taken a server hit in my eyes and I will not consider them for future gear/clothing. If you’re looking for real technical performance ware there are better companies with true performance products at a better value.

This is a true shame because this could have been a great coat and even worst a once great brand has seemed to have lost its way. I’m back to Columbia, not as flashy but their stuff works and has never let me down like this coat has. 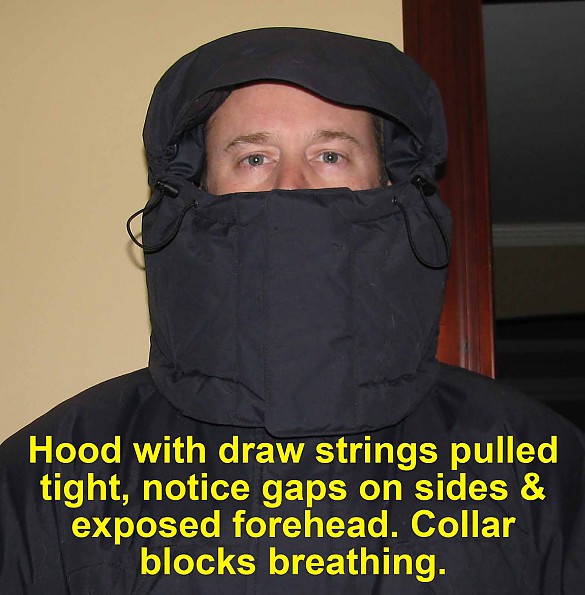 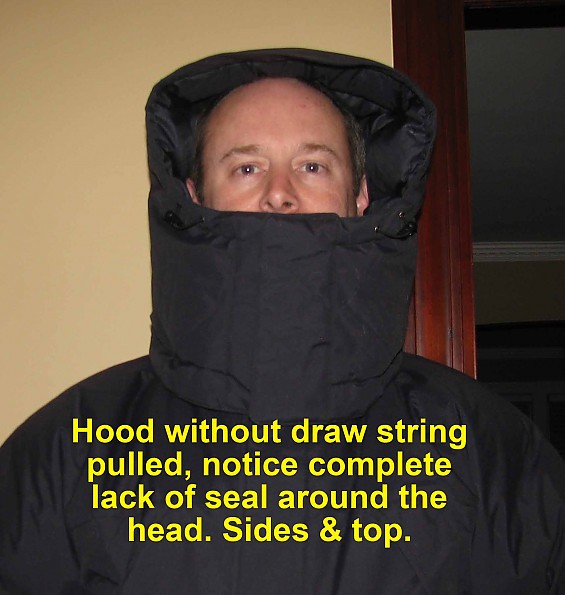 Excellent parka, plenty of well thought out pockets, velcro and insulation. The pocket under the zipper flap took me a bit to find. The handwarmers are a must, some manufacturers don't add them. The outside diagonals are perfect for water bottles. The powder skirt is another quality addition.

I have been in 7F weather and laid in the snow for an hour and stayed dry and warm.

When buying the Yukon I had my decision down to the MH Subzero Hooded and the Yukon. I decided on the Yukon due to price and the reputation of Marmot. I bought it at the end of the season in 2010 and saved some $$.

I have two Marmot sleeping bags and love the quality. I replaced a 15 year old EMS parka.  The layout is similar except the shell of the Yukon is more durable. Also, a nice added feature for the zippered hood is a looped latch to prevent the hood from unzippering if not up, my EMS required me to put a safety pin in to perform the same function.

I have a MH subzero without a hood and love that coat, but it is not a parka. So, it was a tough decision to go with the Marmot, but I would recommend it if you need a real parka. For warmer conditions my MH hoodless subzero works fine.

More of: the best down insulated jackets » | Marmot »