The Chameleon Wrap Mid Gore-Tex XCR has been discontinued. If you're looking for something new, check out the best hiking boots for 2020. 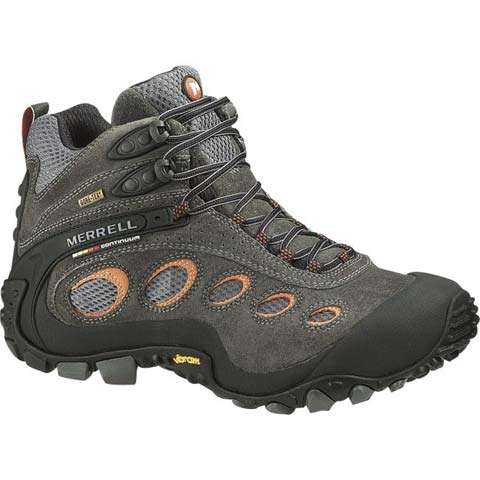 I put these boots on right out of the box with a new pair of medium wool hiking socks and they felt great. The next day with my 45 pound pack along with 6 Boy Scouts we hiked 5 miles on a fairly easy trail (1500 ft. gain).

I would never have known these were new boots out of the box. They were warm (a little too warm for a 90+ degree day), had very good traction especially on the rocks by the stream and descending, and no sliding or hot spots. They had good support on uneven parts of the trail. I didn't feel rocks through the soles at all and they are very lightweight compared to other back packing boots I have had.

The best part is they are totally waterproof. On the 3 stream crossings I was standing up to my ankles in water and not a drop made it to my socks. Since I have only used these on the one trip I can't say how they will wear but so far they are the best boot I have ever had.

Never had I felt this comfortable of a shoe out of he box. I wore them casually to break them in for the month preceding hiking season in 2007. Normal usage is an eight miler, once each week, on steeps, cliffs, rocks, dirt, loose stone, big rocks, and off trail. These boots were put through the paces and I thought I had found the most comfortable AND functionally sound trail show EVER!

Initially, I thought Merrell had named these wrong, and might have gone with "GECKO" because the traction was incredibly solid, near perfect, tight on rocks, yet forgiving on fast changing dirt trails. My first few hikes, I was convinced I was a Merrell man for life. I was cutting large chunks of time off my hike. That's until I started cutting off large chunks of the sole...

About hike five of the summer. The front rubber that folds up around the toe started coming unglued. The soles of the shoe looked like they were cracking a bit, but I didn't think it would get as bad as it did. The following weeks, hikes 5 thru 10 were navigated with less rubber tread each week, until I had to start gluing literally, the whole center tread on the heal of the right shoe! The toe glue didn't hold, the cracking got worse, and I spent most of my summer gluing and fixing these poor quality soles!

Incredible how this ultimate experience continued to turn more and more sour as the weeks went by. Even when I contacted Merrell about their quality, they didn't respond. VERY VERY VERY disappointing, and I will not buy another pair of Merrill shoes since they seemingly don't respond to complaints or stand behind their product.

Surprising that such a comfortable and well built shoe was such poor quality, and I wonder, has anyone else experienced this? Must have been a bad batch of rubber or something, because the shoes today have at least six or seven "teeth" missing and large chunks of the sole missing and glued to fill in. What CRAP!

At least I understand now why they call them Chameleon. They are "disguised" as a quality trail shoe... I only gave 2 stars because of comfort, and they look cool. Functionally, most of my shoes have lasted at the least, two years of intense trail running.

These barely made it through 23 hikes this summer. And the glue easily tacked on another 20 bucks to a shoe that is already WAY overpriced as a performance shoe. I wouldn't run in these, or the bottoms will fall off!

Our community of gear reviewers has field-tested and rated the top hiking boots available.