The Outland Mid Gore-Tex has been discontinued. If you're looking for something new, check out the best hiking boots for 2020. 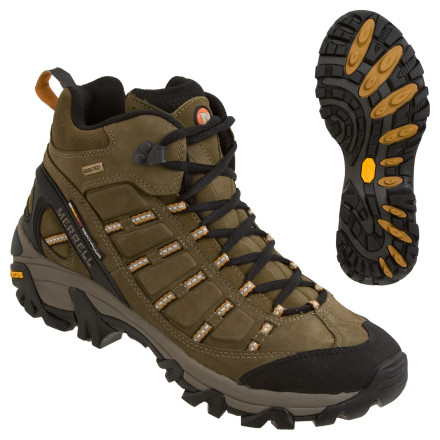 I used to work in a local shoe store so I have seen this model for a while and always liked it. Never seen it returned so it had to be a good shoe even at the price. "I'm very cheap!" The big breaking point for me when it comes to hikers I do enjoy the Vibram soles. They really should be put on more shoes, anyway.

I bought these shoes and one of the only problems I had with them which can be associated with any other shoe is the insole. I have never liked Merrell insoles they never give enough added cushion for me. So besides that they have been working great for me.

One thing that I really like about this particular shoe is the heel its a higher heel and it has some added traction to it that helps tremendously when out and about on the hill and it also helps with arch support as well. I'm not a big mid fan, but for the price I was willing to try.

I actually won these guys in a store contest, but I love them all the same. This Gore-tex (newer model has Merrell waterproof lining instead, but is cheaper I think) boot has been good to me so far. The soles (Vibram) have held up well, and the leather and goretex lining have also held up well.

I took these guys to Costa Rica last summer and they performed nicely, keeping the water out when it rained every day. They didn't breath at all, but then again, nothing will down there so I don't really hold that against them. Support seemed pretty good, but they lack the real sole/ankle supports that you'd find in a true hiker (this shoe doesn't have a stiff piece of nylon in it for footbed support).

The only reason I gave these a 4/5 is because of arch support and lack of features. I will never rate a Merrell above 4.5 stars because they simply don't have good insoles in them. Those who claim the support to be great either have flat feet, or have never tried a truly supportive shoe/insole, like a Chaco or a Superfeet.

The other half star I took off was because I fail to understand why this shoe was only 5 dollars less than it's full hiking cousin, the Chameleon Wrap Mid, when I got it. It is much less stiff in feel, and as previously mentioned, lacks the nylon shank of a real hiker.

On a side note, I also wore these last winter and they kept my feet plenty warm/dry walking around Purdue University's campus.