The Helium GTX has been discontinued. If you're looking for something new, check out the best backpacking boots for 2023. 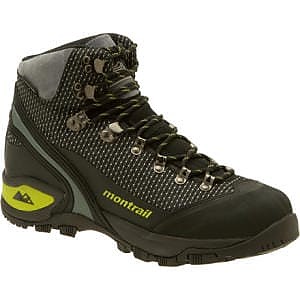 I bought this boot because of its looks and after the good review on Backpacker. It's a very light boot, the grip is awesome, and have had no blistering.

The problem is that on my very first day of using them, I noticed that the back portion of the boot was beginning to peal from the frame. I was really bummed when I saw this considering how comfortable this shoe was... Now I'm going to need to return them. BOOOO!!!!!

This is by far the most comfortable boot I've ever worn. The Helium GTX story:

Two years ago, Montrail came out with a design for a boot called the Overland GTX, which never made production. It utilized the Boa lacing system in conjunction with a traditional lacing system to keep you foot planted in the heel of the shoe, while still lacing down into the footbed. The Boa system, as most of you know does a good job of failing, so Montrail scrapped the design.

Ownership changed and the design resurfaced without the Boa system but with the really cool features it had before under the new name Helium GTX. Some of those features are: a composite shank that weighs less but holds up and wont wear as quickly as a steel shank; a bombproof fabric; Gore-tex liner.

The two other things to discuss are the heelcup and the width. Montrail is known for the integra-fit--800,000 feet were measured to determine sizes and widths for montrails shoes--and they have a few models of boots that are available in a wide size, but the helium takes the cake here: it is by design wider. It is made to be a wider boot for a wider foot. I usually wear a 9 wide in Torre GTX by Montrail and the 9 in Helium GTX is heaven.

To sum it up the Helium GTX, to me and the friends I've sold on them, is the soulmate of feet.

Materials: Gore-tex, Gryptonite Rubber Sole
Use: all purposes but running
Break-in Period: no need for breaking in, perfect out of the box
Weight: 1 lb 8.6 oz
Price Paid: $220