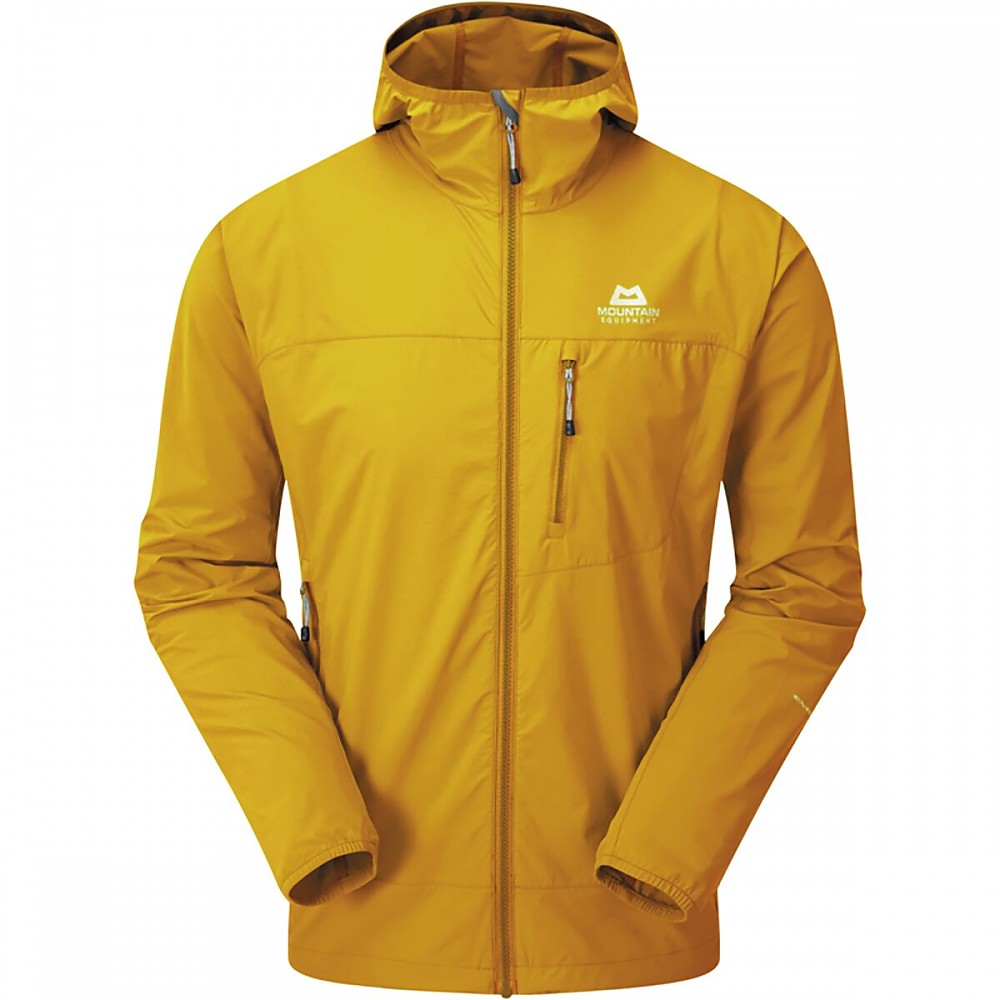 The Mountain Equipment Echo is an unlined soft shell jacket designed for active pursuits with specific designs for the climber, including articulated arms, a drop hem, helmet-compatible hood, and dual toggle hem. I have found this jacket highly useful for ranges far out of its intended uses—as a protective layer against the sun, a mid-layer in cold winter temps and, of course, as an outer layer in cool temps, especially against wind and abrasion.

I have been testing the Mountain Equipment Echo Hooded Jacket for almost six months now and it has been used from a frigid Canadian January winter to intense Jamaican sun-soaked beaches. It's been used for backpacking, ice climbing, rock climbing, and travelling for a total of who knows how many total days, I wear it so incredibly frequently. I would venture a guess of a least 50 days of activity as well as a bunch of casual uses. It's probably been through the wash six or seven times. 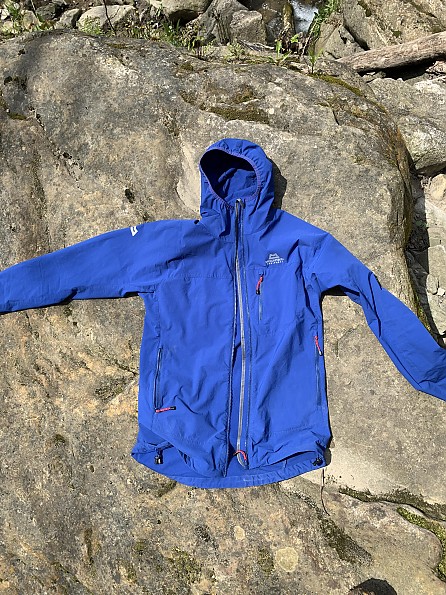 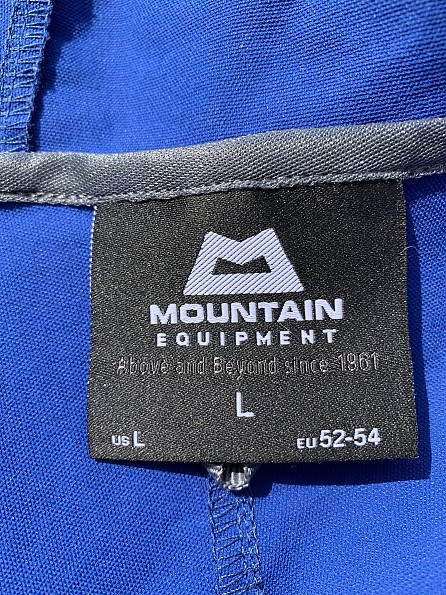 The fit of the Echo is spot on, slim fitting without being restrictive. I am six foot, 175 lbs (39-inch chest, 33-inch waist, 19.5-inch shoulder width) and tested a size large.

The hem is a good length falling below the hips, which helps it remain under a harness or a pack hip belt without wanting to pull up. There is also a drop hem which extends an extra inch and a half to cover more of the backside when sitting or bending over. The sleeves fall nicely at the wrist and remain there even when extending for a hold or swinging an ice tool. The body of the Echo is tailored nicely and leaves no excess fabric around the waist or chest. They are calling this their "active fit."

The Echo does come in a women's version as well. 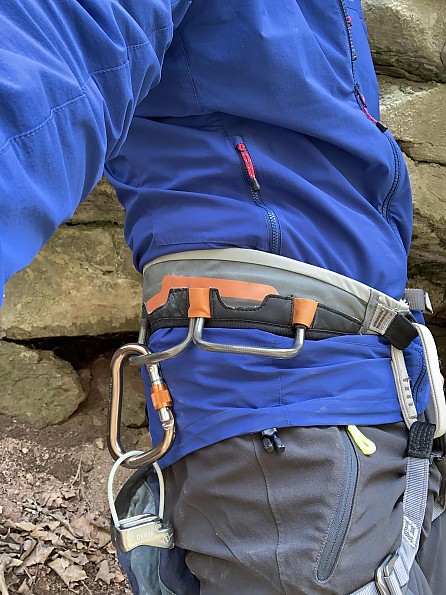 The Echo is made from what Mountain Equipment has dubbed their Exolite 125 fabric—an incredibly light, yet durable, double weave soft shell. It’s made from 94 percent Polyamide and 6 percent Elastane, which gives it just enough stretch to make the cut even more flattering.

This is designed as a minimalistic layer and as such doesn't offer a ton of adjustability. The hem has an elastic drawcord with cord locks, which is genius level design—rather than a loop which can add to a lot of confusion when attempting to clip stuff on your harness, as well as get caught when climbing—and is divided into what Mountain Equipment is calling dual tether hems. Essentially, imagine cutting the loop so you'd have two separate pieces, far less likely to get caught, and I find, easier to pull to tighten and adjust. 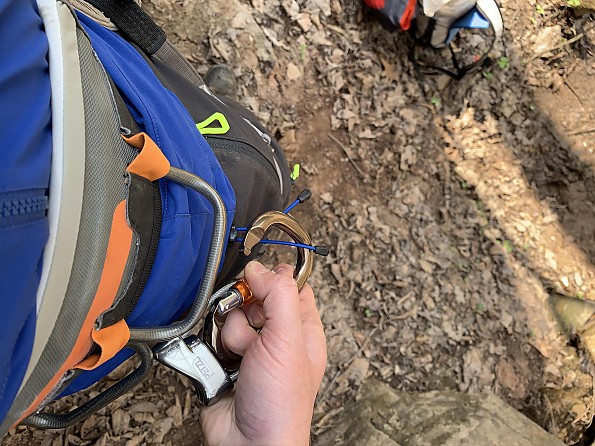 The hood has no adjustment points, but fits nicely under a helmet, either of the climbing or biking variety. The outer edge is elastane bound so it seals nicely. I don't miss the adjustability because it fits me so well as is, but if it doesn’t fit you as well, I imagine this might be a little more bothersome. The wrists are simple elastic as well. 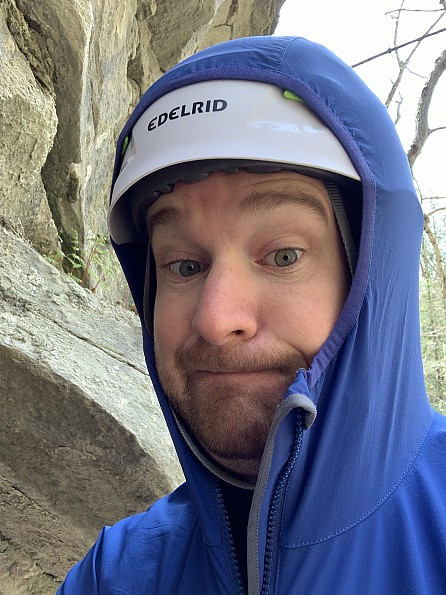 Can be fit over as well. I usually prefer my mid layer hood to fit.... 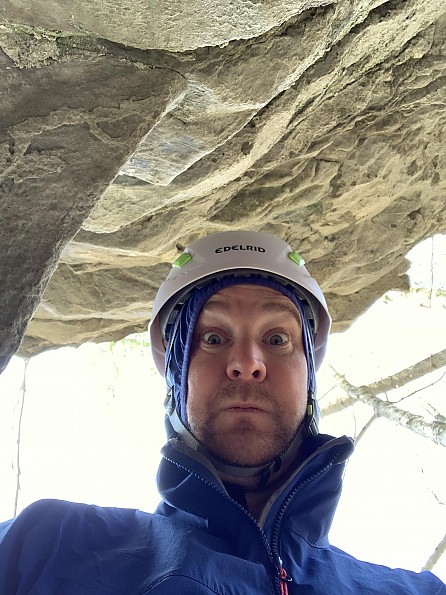 Under, which this does perfectly. Just wanted to show that both could be done.

The zip is not a two-way zip, so the only venting option (although this thing breathes so well you rarely need it, more on that below), is zipping down. It's a bit of a convenience thing more than anything, but it would be nice to have for belaying.

The Mountain Equipment Echo is designed as a lightweight (11.5 oz) layer and when utilized on its own isn’t going to trap a large amount of heat; it’s just not designed to do that. It will however provide excellent wind protection, and repel any moderate precip, more than enough time to get your dedicated shell on over top, or dedicated insulation layer should you need it. It is definitely an active layer top and it’s not going to be something you stash in your pack for emergency warmth (unless it’s a summer trip). For more specific temperature range suggestions, see below in the "Layering" section. 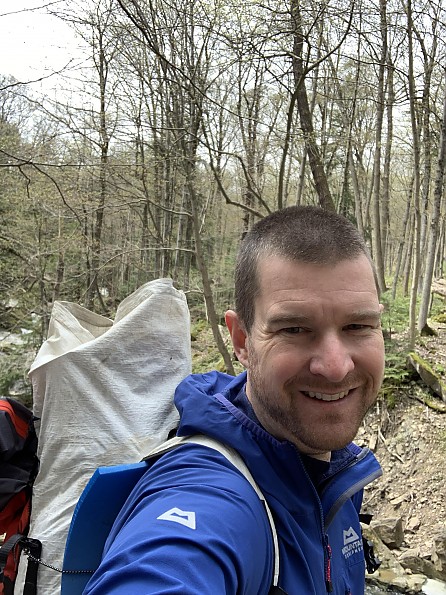 It's a perfect shoulder season backpacking layer as well.

This is one of the largest pluses of this jacket in my opinion. The fit is so good that it works perfectly in every scenario I’ve tried it in.

In warm to hot conditions (let's say +10° - +30°C, 50°f - 86°f) I would wear just a synthetic or merino t-shirt underneath; it’s incredibly good at protecting you from any UV damage and light enough that you won’t overheat. I’ve worn it like this a couple times on exposed belays and once it saved my behind in Jamaica (got a bad sunburn the previous day and had a day of snorkelling planned for the next day, nothing like the rays bouncing off the water, and nowhere to hide, to fry a pale skinned Canadian. I used this every time I came out of the water and my skin was no worse for the day. Also probably good to note that the salt water did no damage whatsoever. It also travels incredibly well because it rolls up so small, is incredibly light, and doesn’t wrinkle easily). 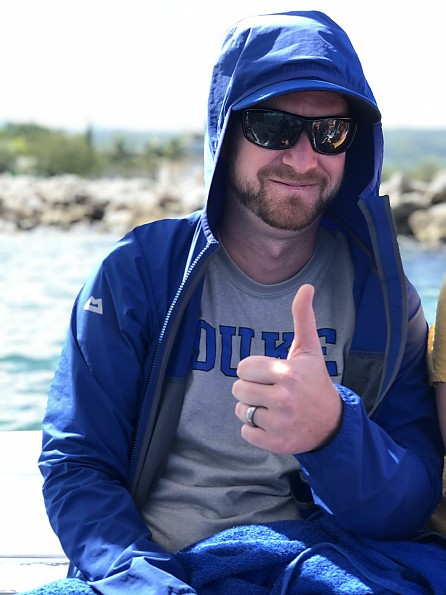 (As a sole mid-layer)

And in full on winter conditions (-10°C, 14°f and lower) it works uncommonly well as a second layer. I will usually go with a full wool longsleeve, the Echo, an insulation layer, and then a shell over it all. There are a couple reasons that this jacket works so well for this: 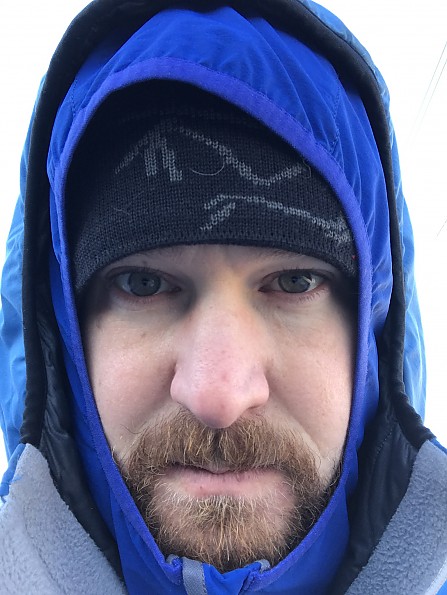 (As part of a full winter layering system)

I think this is where I have come away the most impressed with the Echo, I have found it useful in both -30°C (-22°f) Canadian winter, and +30°C (86°f) Jamaican “spring” (no one in their right mind would call that spring except people from the Caribbean!).

“What rock?”—That’s the Echo laughing off constant abrasion from being scuffed through months of limestone and shale. The Exolite 125 double weave fabric is insanely tough. It is both smooth, to minimize getting caught, and stretchy, which allows some give if it did get held up. It’s really quite baffling when you feel how light it is and how thin the fabric is. Heavy pack straps are laughed off. Hood under a helmet, doesn’t care. 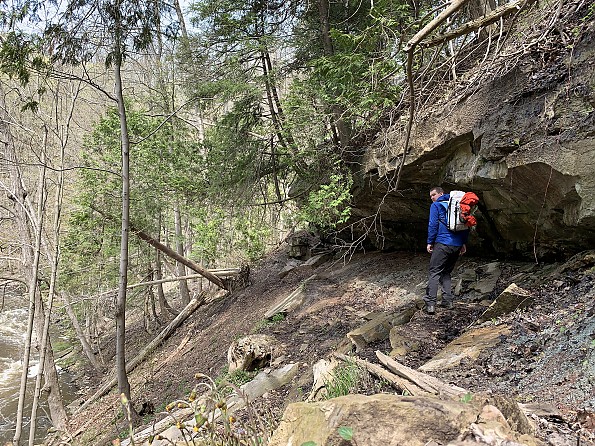 I’ve lumped the two together because they are at most times at odds with each other. The technology in Wp/b is getting better and better, but in my experience, if it's waterproof, then it breathes less than if it’s not.

Where I find the Echo hits the sweet spot is that it is both highly weather resistant AND breathable, key word being resistant. Make no mistake, this is not a fortress to depend on for a week in the wilderness. It does, however block almost all the wind and a light shower. There is no DWR to hinder the breathability so it relies on how tight the Exolite 125 double weave fabric is to keep moisture out. Snow bounces right off, even wet snow, but anything more than about 15 minutes of a medium intensity shower will wet through. That is more than enough time to don your dedicated shell though.

Everything about the Echo Hooded Jacket is of the quality you would expect from a top notch company such as Mountain Equipment. All stitching is straight, no loose threads, top stitched and then over locked. All zippers are YKK brand moulded zips and move freely without coaching anywhere on the fabric.

Pockets are sized large enough for light gloves, an energy bar, or cell phone/ GPS and placed high enough that they are not restricted by a harness or pack belt. The are two hand warmer pockets as well as one exterior left breast pocket, and all are zippered to prevent anything from falling out when climbing. 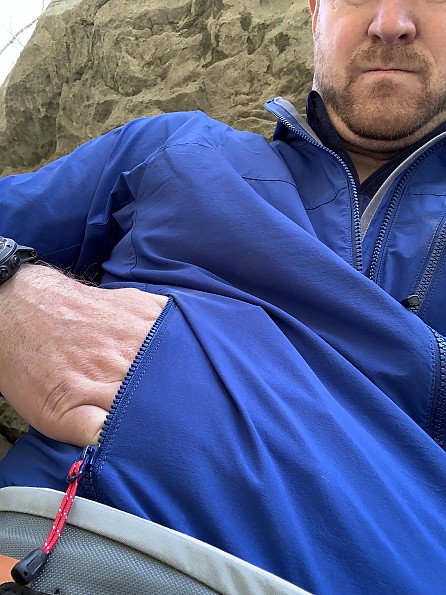 The Mountain Equipment Echo Hooded Jacket has found a permanent place in my clothing rotation almost regardless of season. Its fit, durability, and range of uses far exceeded my expectations, to the point I'm left wondering what it can't do.

I have been testing the Mountain Equipment Echo Hooded Jacket for almost six months now and it has been used from frigid Canadian January winter to intense Jamaican sun soaked beaches. It's been used for backpacking, ice climbing, rock climbing, and travelling for a total of who knows how many total days, I wear it so incredibly frequently. I am, admittedly, a fan of the versatility of unlined soft shells and have owned many over the years, my previous favourite being the Mountain Hardwear Super Chockstone.

Source: received for testing via the Trailspace Review Corps (Sample for testing and review provided by Mountain Equipment) 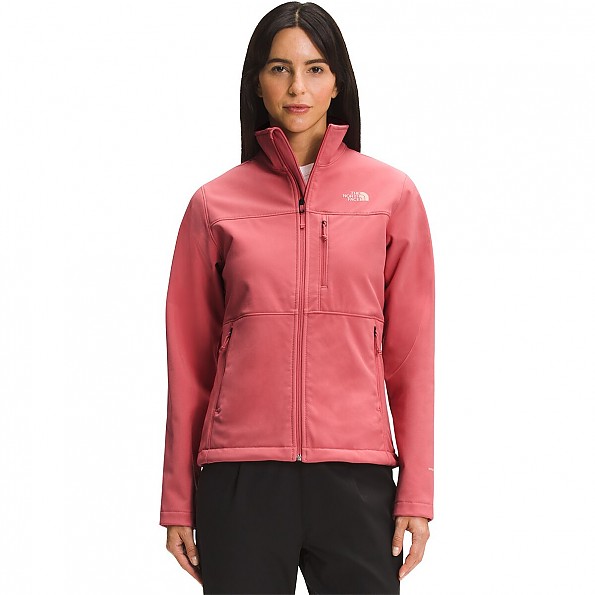 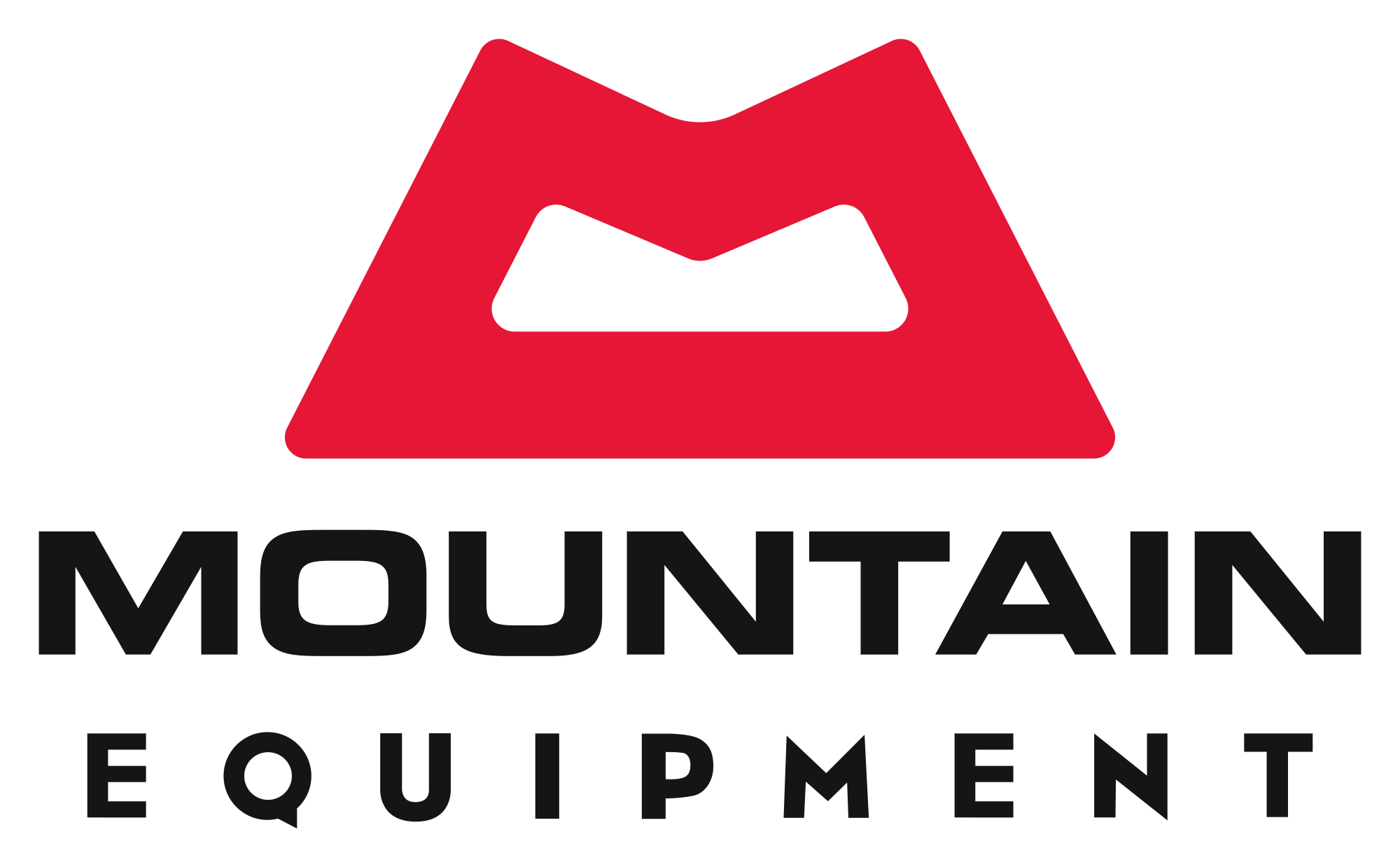