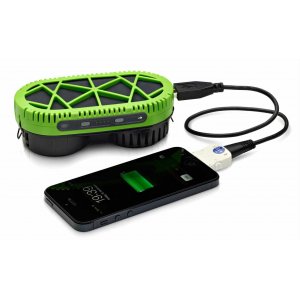 An innovative charging system designed to use water to generate electricity to charge small electronics in the backcountry. Unfortunately it did not perform adequately due to production and other errors.

The MyFC powertrekk fuel cell is designed to use water as a fuel source.

Included in the box was the fuel cell system, power cord with adaptable tip, and connection plugs for popular electronic devices including a mini-usb and iPhone/iPad plugs for all current generations. Also included were 9 fuel cell pucks.

The powertrekk has two parts, the top section contains the internal battery and the “engine” that converts water to power as well as a micro-USB port and a standard USB port. The bottom section contains the water reservoir and the compartment for the fuel cell. The two halves are connected by clips on either end of the top section. The sections are designed with interlocking tabs that prevent incorrect matching of the top and bottom. 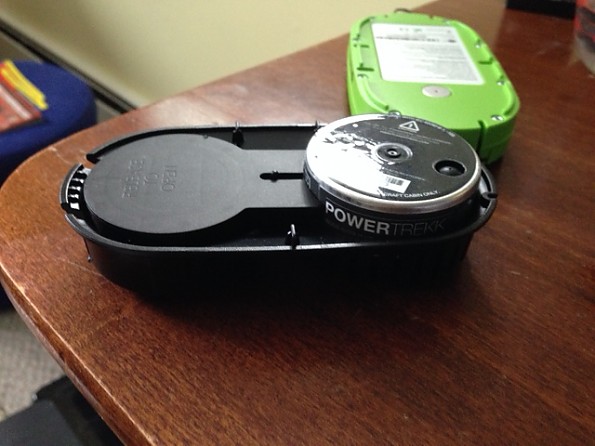 The top portion of the powertrekk has a control panel which displays the internal battery level, a light indicating energy creation through the fuel cell, and a light that indicates power is being sent to the device being charged. There are two buttons as well, one provides a reading of the internal battery while the other stops or starts power from being sent to the charging device. 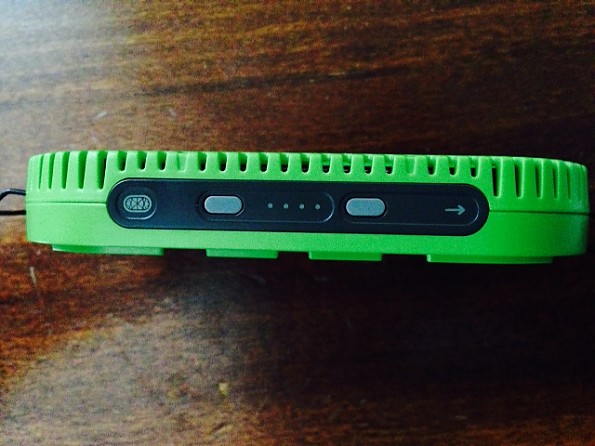 The only thing not included in the box was a plug for a standard wall outlet. You can either plug the provided cable into a USB port on a computer or you can also plug the cable into the outlet adapter that comes with many smartphones. I opted for plugging it into the wall so I could test the amount of time it took to charge the internal battery using the most consistent electrical source. 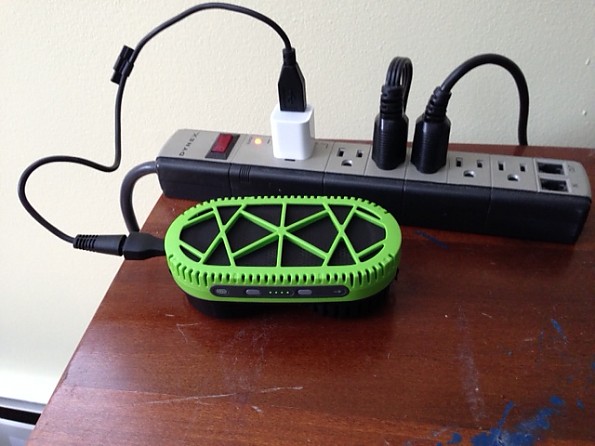 It took just under 30 minutes to bring the battery to full charge which was indicated by all 4 lights on the control panel blinking.

Charging with the MyFC Powertrekk

I tested the internal batteries stand-alone charging capabilities by charging a Petzl NAO headlamp. With the MyFC battery at full power it was able to charge the headlamp for 1 hour increasing the headlamps charge by 33%.

The first 9 fuel cell pucks I received failed to produce power. This issue was presented to the company and they indicated that there were production errors during the time my pucks were made and sent out replacements. Unfortunately, this was not the only issue with the product. During the first round of testing it was very difficult to keep water from leaking out of the internal reservoir.

Upon receiving the new supply of fuel cells, I began testing once again. I utilized an eye-dropper to carefully fill the reservoir to reduce the possibility of spilling. Unfortunately, the reservoir never held water. Any amount of pressure caused the water to leak out of the system. 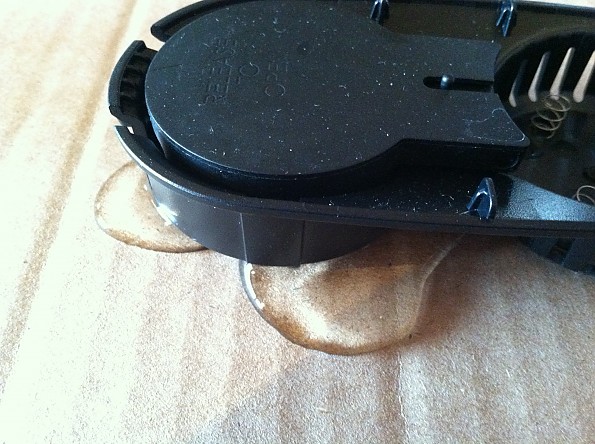 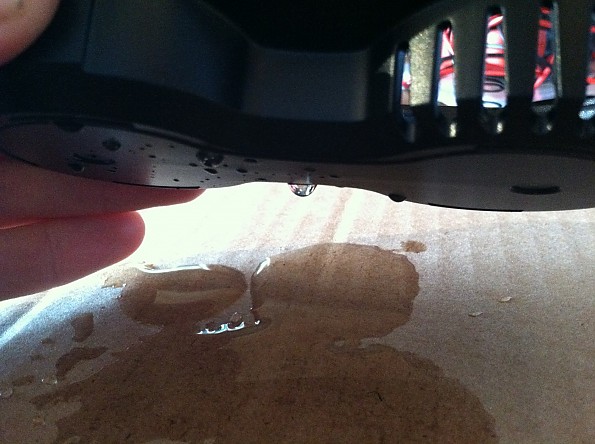 The good news with this round of testing was that the fuel cells did work! During one attempt I was able to get water to hold in the reservoir long enough to insert a fuel cell and start the system. 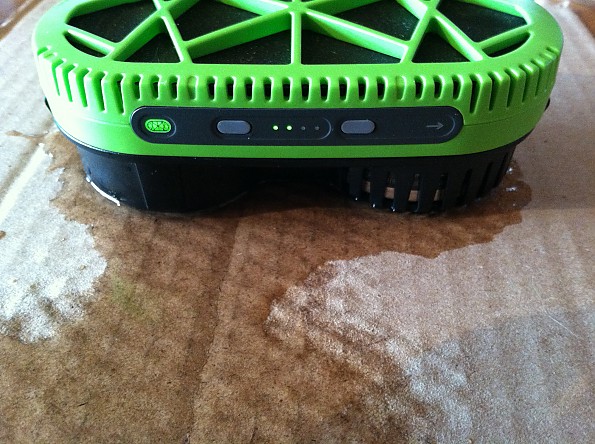 You can see by the green light on the left side of the control panel that water is being converted to energy. This lasted 2 minutes until all of the water eventually leaked out of the bottom.

This was the last test for the MyFC powertrekk because of the multitude of product failures.

While this product did not deliver on its promise to provide energy in the backcountry, it is highly innovative. It just may need some more time to get the bugs worked out.

The reason this product is getting 2 stars instead of 0 is because of the innovative technology, the fact that it contains an internal battery, and that it came with the ability to charge all of today's popular products.

At this time I would not recommend the MyFC powertrekk for use in the backcountry. Hopefully future versions will solve some of the errors I dealt with because this could be an interesting solution to charging electronics.

Source: received for testing via the Trailspace Review Corps (Sample provided by MyFC for testing and review)

Very useful info Jim. I'm looking for a power solution currently and will cross this one off my list for now.

Thanks for testing this out and letting us know how it fared, Jim. Perhaps the problems will be fixed and it will be worth a second look in the future.

Thanks for testing this Jim! Let's hope they get these issues fixed. This concept has a lot of potential. 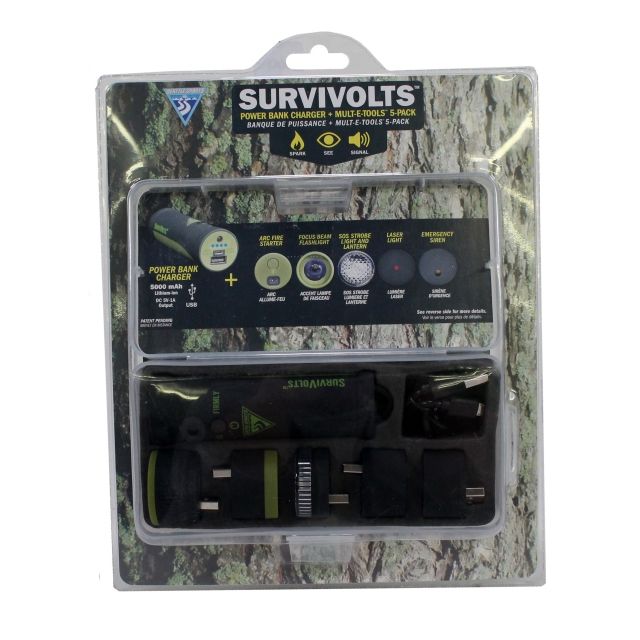 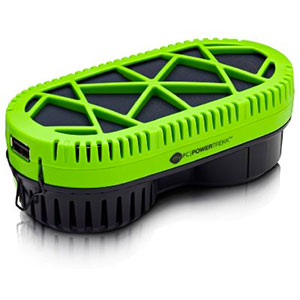