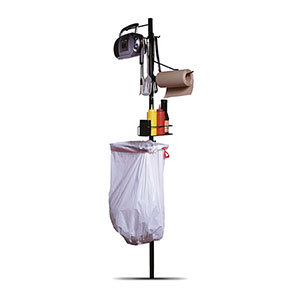 One of the most useful items for car camping that…

One of the most useful items for car camping that I have ever picked up. Gives a nice organized place to hang a lantern, utensils, paper towels, spices, and even a garbage bag, no matter where you are.

I first purchased this item years ago when it was called the Kamp Kadie and sold by Cabela's.  I don't believe they sell it anymore, but I have seen it sell in stores like Wal-Mart as the Camp-Caddy, and on other websites as the Kamp Kadi.

As I said in the summary, I believe this has been one of the most useful tools I have used for car camping that I have ever purchased.

It comes with several pieces a little over a foot in length.  You will always use at least two pieces.  The main top piece which has hooks for the lantern, paper towels, and utensils.  Then one of the two bottom pieces, one with a pointed in that can be driven into the ground or another with a clamp that can be attached to a table.  You can add as many of the other available three sections (at least mine came with three others when I got 10 or so years ago).  So, when hammered into the ground it comes out to around 5 feet tall.

It also comes with attachments that can be slid on and clamped down over any section.  One is a small spice rack, and the other is a garbage bag holder.  They are both very useful items to have around the campsite.  Just remember to take the garbage out each and every night and throw away, especially in bear prone areas.  I have never had a bear attempt to get the garbage, but I did have a skunk visit in the middle of the night once when I forgot to throw the bag away.

It's been a very tough product and has lasted me for several years on countless camping trips.  The only part that has worn on it is the paint, and that's only in the sections that slide together. 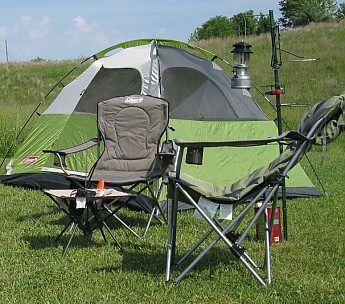 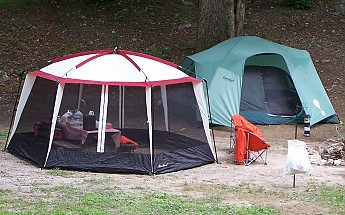