The Megaplume Jacket has been discontinued. If you're looking for something new, check out the best down insulated jackets for 2021. 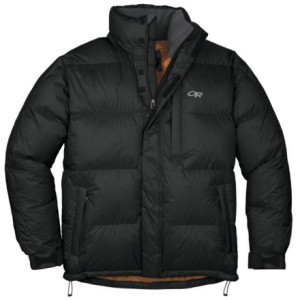 I finally put up the funds for a quality down belay jacket/parka. I'm primarily a rock climber, but I'm starting to accumulate gear to eventually begin alpinism/mountaineering.

I live in Detroit, so the mercury plummets pretty far, but this jacket is incredibly warm. The hood is large and definitely accommodating for a helmet (or a head full of dreadlocks), but also easily removed by zipper and the zipper itself hides with a flap.

The loft is really nice and light, but at 650+ fill power it isn't an ultra-light. The Velcro on the front draft/storm flap I can imagine icing over, but I haven't put it up to that test yet.

I'm pretty small, so my only complaint is that their "small" is too big. I stand about 5'4" 135lbs, with a slightly smaller chest than what this is measured for. It's not a big deal though because if you use this jacket for what it's for, mountaineering/climbing, then you'll presumably be layering a bit.

Also, Outdoor-Research's "Infinity Guarantee" is exciting. Putting up the funds for something like this is hard to do sometimes, but when a company really stands behind their product, it helps influence your purchasing decision. 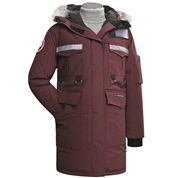