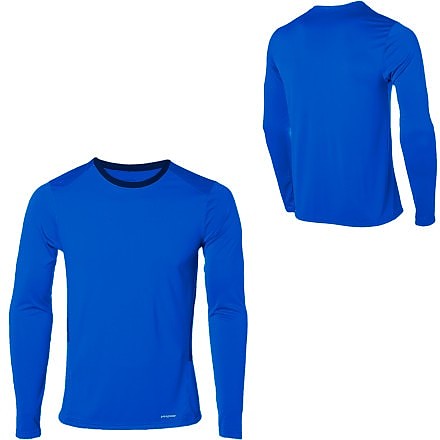 Comfortable and light with powerful wicking properties, this shirt works well as a base layer and even better as a standalone cooling shirt. Great for those who need to stay dry in cold weather and those who would enjoy the evaporative cooling effect when hot.

Made from a soft and resiliently stretchy 94% polyester and 6% spandex, the Capilene 1 material feels great against the skin, which is important for a base layer. The sized large I purchased was listed as being a "slim fit" but was comfortable even when I had my winter belly.

The arms run about 26 inches from cuff to armpit without stretching and the shirt extended well below my hips making keeping it tucked in easy. Leaving it out was also an option because it didn't seem to ride up my pack belt as many other shirts do. The soft, thin material was a good abrasion limiting layer under a pack, but won't protect from a poking buckle or other hard contact. 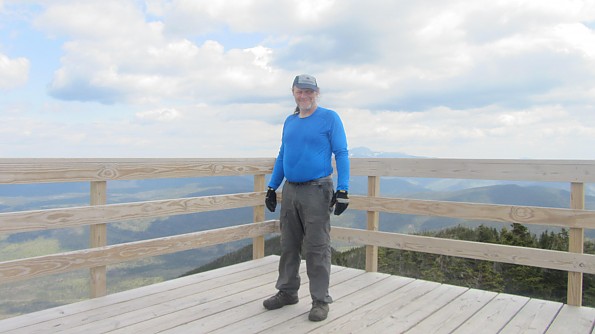 Early May Carrigain after climbing up a still icy Desolation Trail. Plenty of room for my winter belly.

Capilene is made to move moisture and at this lightest weight it also breathes very well. I found that despite my propensity to sweat early and often when hiking that I was actually dry at times. When I did sweat it through the evaporative cooling effect would kick in for any areas exposed to the air.

Most of my use was as a cooling shirt, but when used as a base layer this shirt surprised me by the warmth it added rather than cooling. It wasn't a lot, but combined with a light grid fleece it worked great under a jacket for cold weather outdoor activity. 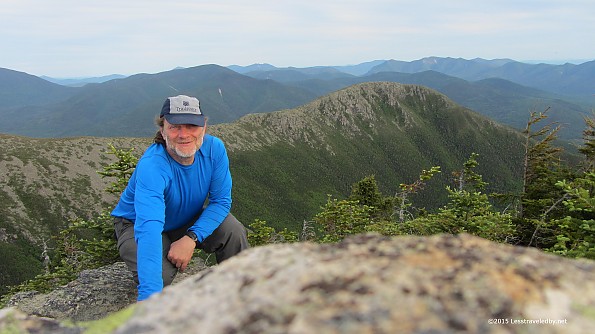 Warm June night on the Bonds. Enjoying the sunset in comfort and style.

Patagonia claims a UPF of 50+ on its label and I found it to work well at sun protection. I did a fair amount of hiking above treeline this year and never experienced any sunburn on my arms or shoulders. They also list their use of Polygiene, a permanent odor control agent intended to limit bacterial growth. I will give this credit for having some benefits. It was no match for what I put it through, but it smelled better longer than any other shirt I've worn on trail.  When it did get utterly funked by a week long rain filled trip I was surprised that two washings and some time on the line in the sun totally removed the odor.

Another nice feature is that they included thumb loops for keeping the arms securely extended. Not an issue when used alone, but great for when using it as a base layer. Annoying to have to keep trying to tug your innermost sleeves down all day if they start riding up. 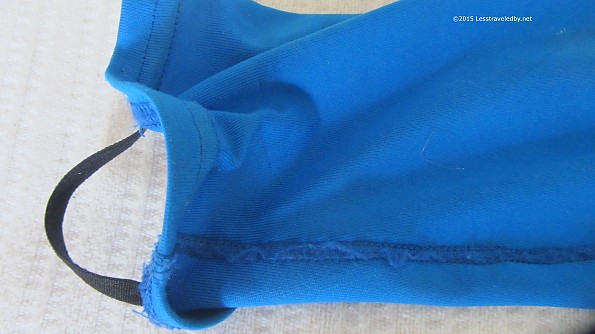 View of the thumb loop. Very well stitched to the sleeve so as to be functional.

When purchased the stitching all seemed very well done so I was surprised when after the first few uses I began to notice fraying along the exposed seams. After using the shirt for almost an entire year this has turned out to be a cosmetic issue that hasn't impacted performance at all. 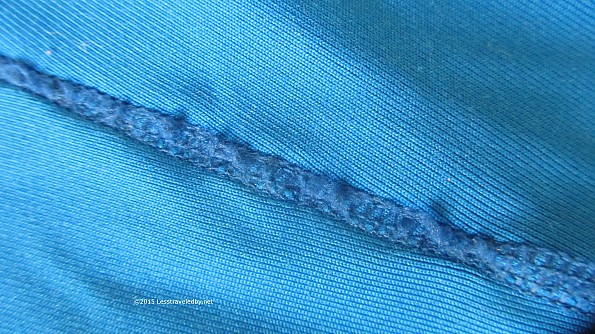 Closeup of a seam. Despite the appearance issue the underlying stitch remains effective.

There are a couple of other areas that are starting to show some wear. Spots where the shoulder straps and waist belt rode against the material have begun to show some signs of abrasion. These did not appear until late in the season after months of hard use. 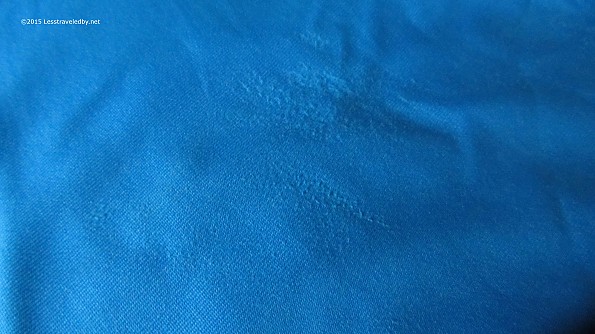 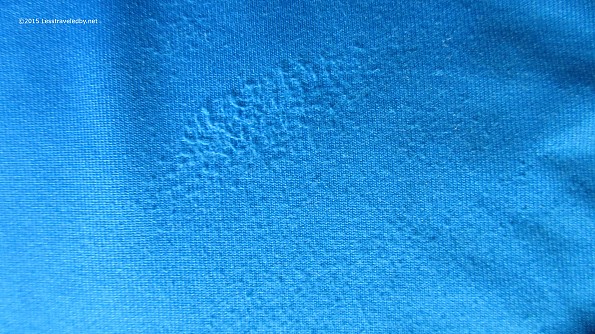 This shirt was used primarily as a standalone hiking shirt for backpacking trips ranging from two to seven days. I generate a lot of heat and sweat while hiking in any season which put the breathing and wicking aspects of the shirt to a serious test. I also wore the shirt for the driving and camping portions of a cross country road trip where both the sunblocking and odor reduction features were vetted.

Another shirt I used with similar cooling features was a Champion Power Cool which costs slightly less. The Power Cool shirt uses slightly more spandex, 8%, but feels thinner to the touch. The material is definitely different in many ways, but what I noticed most was a tendency to climb up my body, both arms and torso which the Patagonia shirt didn't do. It also lacked the odor inhibitors and was noticeably smellier after similar use.

I've been very happy with this purchase and have no problem recommending the Patagonia Capilene 1 shirt for all season use. Those who hike hot and sweaty will especially appreciate the wicking year round and the cooling effect in hot weather. While there are some cosmetic issues which resulted in a less than perfect score, functionally this shirt performed better than I could have expected and better than the similar Champion shirt I tried. 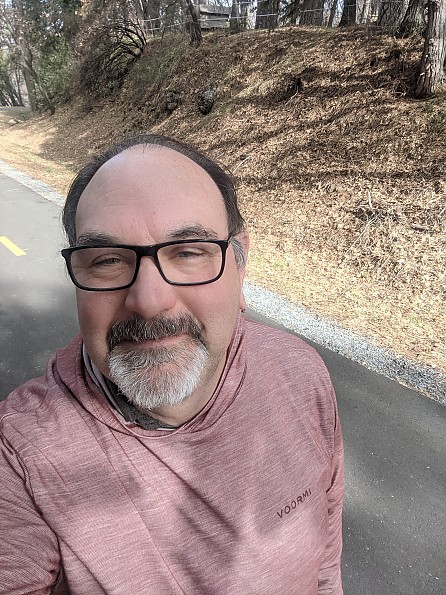 Browse Patagonia's top-rated base layers and underwear and more.