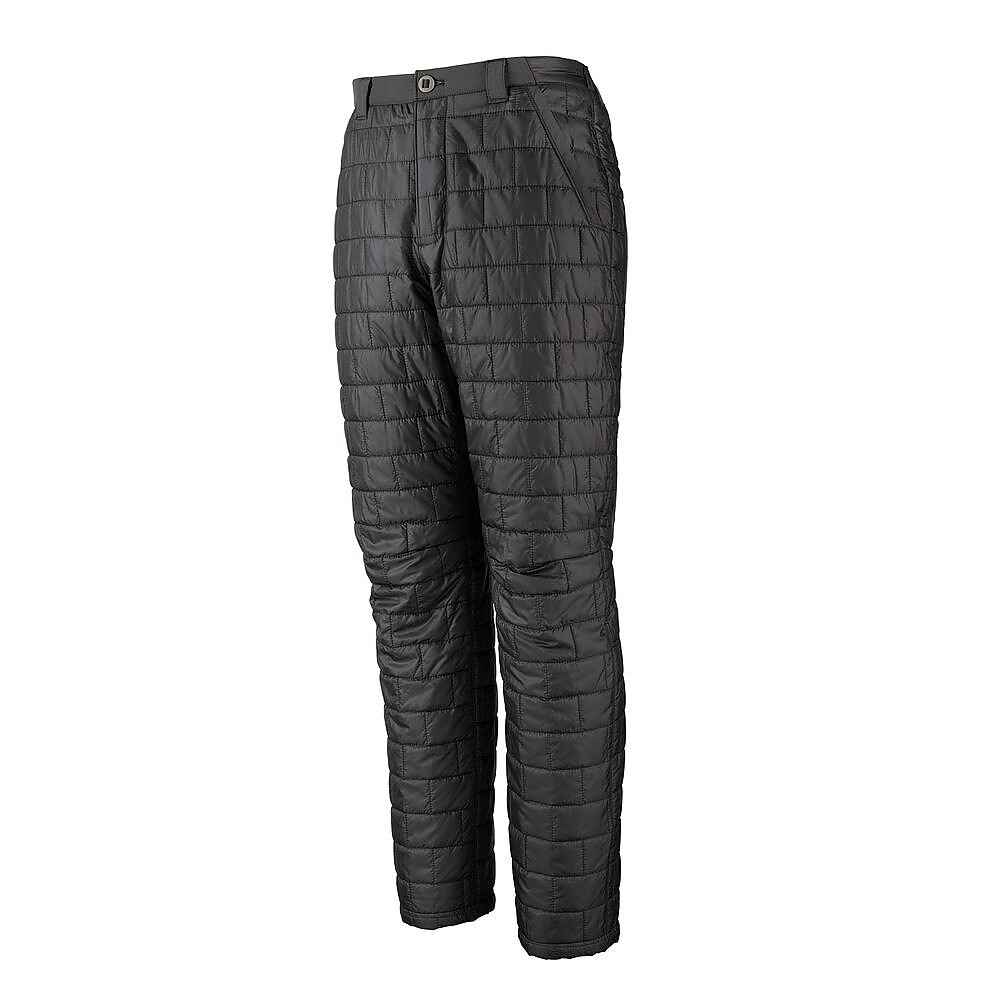 vote up
14
vote down

Warm and comfortable in action or at rest, these pants bring the insulation and packability expected from the Nano Puff line. A well-tailored fit and the ability to breathe well allows for active use in lower temps yet the puffy synthetic insulation protects against wind and cold even at rest.

These pants would be a great addition for anyone looking for packable insulation for the lower half. Peakbaggers or thru hikers wanting easy to carry wind pants with insulation or fishermen wanting insulation for their waders will find these pants fit the bill. Also works great as a mid or outer layer for cold weather campers and others spending long hours in frigid temps.

The Patagonia Nano Puff Pants take a somewhat minimalist approach, bringing a simple design that performs well while keeping in mind that most of its time will be spent in your pack. When puffed up it keeps you warm; compressed it carries easily doing a more than adequate job at both of its primary tasks. 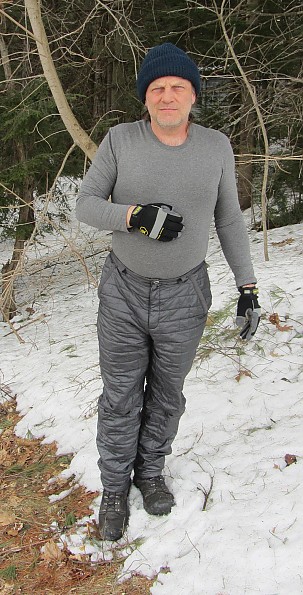 Plenty of room without a lot of excess materials getting in the way.

The shell is made from 1.45 oz 100% polyester which has been given a durable water repellent finish. The reinforced seat panel is made from 3.4 oz 100% nylon taslan which also has a DWR finish. Insulation is provided by  60 g PrimaLoft Silver. Weight shows as 12.5 oz / 355 g on my scale.

Stitching and materials have held up well during the test period with the exception of the small bits of insulation passing through the taslan panel. So far that appears to be only a cosmetic issue though I am not certain of the long term outcome.

The expandable waist fit securely while flexing enough not to feel binding. The low profile of the insulation combined with a somewhat high crotch and the slightly articulated knee make the pants feel like they are made for activity. Despite being snuggled inside insulated cocoons the legs were able to move freely with no sense of binding or friction.

The Nano Puff Pants are what Patagonia refers to as “Regular Fit” which they describe as being suitable for wearing over heavier mid-layers. While these pants fit easily over base layers they did not have enough room to accommodate my regular, baggy style, hiking pants comfortably. It wasn’t a large issue, but the high cut of the crotch didn’t leave a lot of room for the totally opposite style crotch on my hiking pants. If you are intending on wearing these over your hiking pants I’d suggest trying them on in-store to determine sizing and compatibility.

Other than that these pants were really very comfortable. Once the insulation puffed up they hugged the legs. They stayed in place during a range of activities and were flexible enough to sleep in.

These pants stick to their minimalist theme and do not include any vents. The only zipper is at the crotch, running approximately six inches in length. Thankfully, despite being really warm, these pants breathe amazingly well. I made a point of overheating while wearing them and while I was able to sweat out my torso and my mitts, my legs remained much drier. No matter how hot I felt, vapor was able to easily pass though the insulation. This feature also added to their value as sleepwear. It also seemed to negate odor issues which have not been noted at all.

While I have had lots of time in the snow with these pants it has been too cold to see how they handle rain. Water poured on the material beads nicely so I would expect them to handle light exposure well and Patagonia lists them as DWR, but they are not really rain gear.

They do repel snow, in all of its forms, really well. Breaking trail in deep powder while snowshoeing, standing in a blizzard or setting up camp in the snow, the white stuff just slipped right off the surface.

Insulation is what these pants are all about and they deliver. PrimaLoft lets them puff up and create a wall between your legs and the elements. Once warmed up even blasting winds aren’t able to steal that precious heat. While these pants are up to active use they really prove their worth when you are not moving. Even well below zero or in serious wind, standing still or sitting around camp for hours; these pants were warm. I can see why the fishermen like to wear these in their waders.

The lightweight polyester shell doesn’t feel especially durable but I think it protects itself by being slippery and flexible. Despite a lot of time in the woods the only issue I have found with the shell was a baffle thread that got snagged and there have been no lasting issues with that.

The reinforced taslan seat also has held up well to abrasion. The heavier nylon is still very flexible but resists wear when sitting or sliding over fallen trees. There was an issue with small bits of the PrimaLoft insulation poking through the taslan. Not sure if this is just a cosmetic issue or will progress into something more but I am monitoring it. Patagonia may want to think about adding an internal facing to prevent that.

They have chosen not to use taslan or other material to protect against friction at the ankles. So far I am not seeing any abrasion impacts in that area and the tight cut reduces contact in that area.

There are two open access front pockets and a zippered rear pocket. While deep enough to carry small items the lack of zippers kept me from using the front pockets as anything other than hand warmers or a place to warm up a lighter before starting a stove. The rear pocket extends approximately 8 inches deep and has a protective flap over the zipper making it both functional and secure.

The Nano Puff Pants were tested over a period of a bit over two months in primarily winter conditions. Temperatures ranged from roughly 30°f to -15°f. Winds encountered ranged up to 45 mph sustained with some very interesting gusts during a literal blizzard. The pants were tested repeatedly in both active and extended inactive uses.

On the whole I was pleased with how these pants performed and can recommend them for those whose budget allows for the $179 MSR. They pack small, warm up fast and hold heat in deep cold or serious wind. The active fit and ability to breathe very well makes them great for less sedentary cold weather pastimes while the PrimaLoft insulation makes for good heat retention when at rest.

Peakbaggers, thru hikers, fishermen in waders or back country winter wanderers in serious cold temperatures will all find the Patagonia Nano Puff Pants worth the small amount of space they take up in a pack.

View of the zippered rear pocket and the front slash pocket. The Patagonia tag seen here is the only visible branding. Also note the wide waistband and similarly wide belt loops. 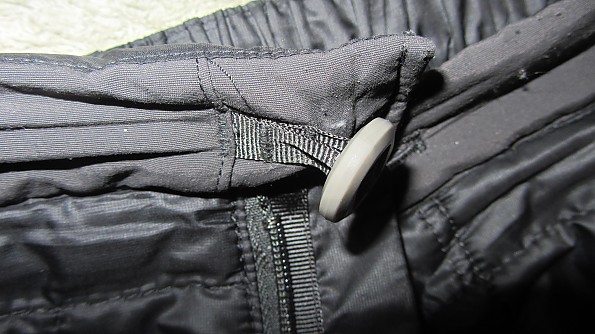 The button at the waist is held on by a secure strap rather than sewn on with thread. This makes it both easy to use and unlikely to get popped off under stress. 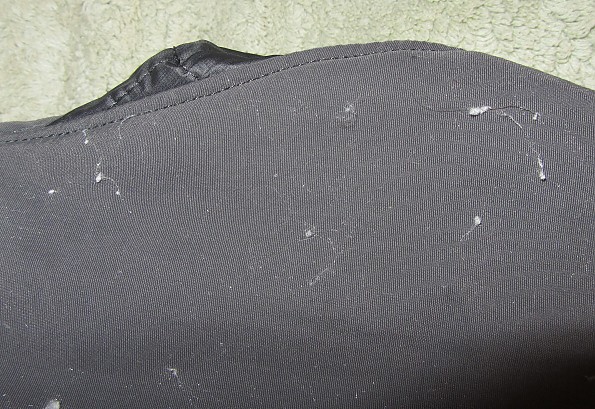 Close look at the taslan abrasion panel with bits of insulation coming through. I have carefully removed some bits and the material seems unchanged, but over time this could lead to some cold spots in that area.

The ankle openings are narrow protecting from heat loss, but making removing boots necessary when putting the pants on or taking them off. The style does avoid friction issues when in motion. 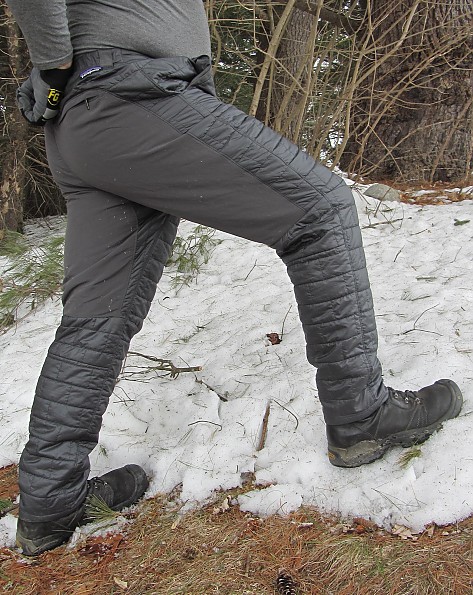 Good view of the articulated knee designed to let the legs move without creating space that can act as a bellows pumping heat out as you move.

Loosely rolled and bound for this pic to give some idea of size but packs best just stuffed into the top of the pack along with my puffy jacket for easy access.

The pants doing what they do best, keeping me warm on an early winter morning in the Pemigewasset Wilderness when temps were right around the 0°f mark. Great for lingering around camp after breakfast.

Very short video of the pants in action. Note how the fit at the knee and the crotch allow easy movement.

Source: received for testing via the Trailspace Review Corps (Sample provided by Patagonia for testing and review)

I can see this being an option for some hunters as well. Lightweight, breathable and warm is a nice combo! Do they make a "swooshy" sound when walking?

Thanks for testing these, LS. I'm glad to hear they kept you warm this cold winter.

Enjoyed this review. Notable that what Patagonia used to call 'nano puff pants' was a totally different product - full side zips, much more of a puffy cold weather pant, best used with suspenders. this seems useful over a wider range of conditions. https://www.trailspace.com/gear/patagonia/micro-puff-pants/#review24607

nice review and actually at a good time for me..I have 2 winter trips for next year and this seems to answer one of my questions. I was going to ask on the forum..I do have to ask are these an over pant or do you just wear your undergarments? Sorry but it pops unto my head..Thanks

Nice review. Those pants seem functional, but boy are they ugly!

@Kiwi I had to try them on to check and yes I guess there is a little swoosh. I'm usually crunching through snow so hadn't really noticed.

@ denis Like I mentioned in the review they are cut too high to wear over baggy hiking pants comfortably but could be worn over something tighter. I wore them mostly with a base layer or two as outerwear but they also would work as a mid layer in deep cold under an outer layer or in rain under shell pants.

@G00SE I suppose you prefer flashier pants like these? https://www.trailspace.com/people/lonestranger/?content=photos&photo=img_4080a

A bit pricey for me, but they seem like they came in handy. Nice review, LS!

These are a little pricey, but you did look comfortable out there