The Torre Parka has been discontinued. If you're looking for something new, check out the best waterproof jackets for 2020.

I have had a mango Patagonia Torre for years and years. I would buy one just like it in a heartbeat.

Anyone know where I can get a new-ish one?

Welcome to Trailspace, Mango! We love to hear about gear that has held up for so many years. If you have some pictures of your Torre, it would be great to see those in your review.

There are a handful of expedition-grade three-layer Gore-Tex parkas that, although they cost more than decent tents, will keep you dry and safe from the wind (as will many lighter and cheaper parkas), and will also last for years (unlike their less hefty siblings). Of these ultimate storm shells, I think the Patagonia Torre Jacket is the best based on weight, fit, and features.

The Torre has the usual impeccable Patagonia construction and all the top features: a tough ripstop main body with taslan reinforcement on the sleeves and shoulders, a fine hood, two waterproof exterior pockets, a quick access flash pocket, long pit zips with two sliders, a zippered interior pocket, and a mesh pocket to hold gloves or a one liter Naglene bottle. Nothing left off, nothing unnecessary added. When it comes to weight, the Torre is lighter than similar parkas from Moonstone, Mountain Hardwear, TNF, Sierra Designs, and Marmot—only the Arc’Teryx jackets weigh less. The Torre is also lighter than two-layer parkas such as the TNF Mountain Light and the Marmot Alpinist Lightweight. As for fit, I want something that can comfortably go over a down jacket and fleece, but isn’t so big that it flaps around over just a shirt or has sleeves that are mismatched to the torso girth. The Arc’Teryx jackets also have a fine fit for climbing, but if you size them large enough to cover a down jacket, their sleeves are too long for me.

And then there are the pockets of the Torre. The slanted flash pocket makes it easy to grab your sunglasses or a candy bar, and the two exterior Napoleon pockets are wonderful. Rather than placing the zippers at a slant, the openings run vertically—making it very easy to access the contents with bulky gloves. And these pockets are big—they can easily hold a trade-sized paperback (I do a lot of reading on ski lifts). Unlike other Patagonia jackets, the zippers open from the top on the Torre, which prevents loose items at the bottom from falling out as soon as you open the zipper.

The interior zippered pocket is big and made of Gore-Tex (no mesh to rip or catch on fleece). And although a placing a filled liter bottle in the interior mesh pocket will make you front heavy, this is a great place to put wet gloves that you might be able to dry with your body heat.

What would I change? The fleece chin guard is a mixed blessing. When it’s dry, it feels cozy, but your breath will definitely condense and freeze on it—and then to your beard. The zipper on the flash pocket has no flap, which means that the pocket is not entirely waterproof—I’d trade for a waterproof zipper like on Arc’Teryx pockets, even though they don’t run as smooth. The Torre’s pit zips are easy to engage and the flaps aren’t difficult to tuck out of the way, but waterproof zippers here also might not be a bad idea—Patagonia does use a waterproof zipper on the fly of their Torre pants. And, although the hood is great, I’d like some stiffening on the brim like Moonstone and Arc’Teryx uses.

Although I’ve never owned one, I like Arc’Teryx jackets a lot. Arc’Teryx’s tighter stitching and thinner seam tape should be used by everybody, although I doubt that they dramatically increase either durability or breathability. I think the waterproof zippers are great, but with Arc’Teryx jackets, the pockets have strange angles that make them hard to open or stuff large things into them. I also don’t think the main body fabric of the Arc’Teryx jackets are as strong as that of the Torre, and I don’t like the stiff cuffs. The Moonstone Sauvage has either the same or a quite similar fabric construction, but seems boxier in fit than the Torre. If you like crotch straps (I had a ventile anorak in ’69 had one), then look at the Sauvage. The Marmot Alpinist Climbing jacket is tough and well regarded, but I can do without the altimeter pocket on the sleeve and the snow skirt. Like a Marmot Cervino jacket I have, the Velcro on the cuffs is much wider than needed—thus snagging on everything. You also have to like that contrasting color look with Marmot jackets.

The waist drawcord of the Mountain Hardwear Ethereal series (and the Arc’Teryx jackets), ride in a separate fabric pocket that reduces abrasion of the fabric by a pack against the hard string. This is a brilliant idea, but I’ll just have Patagonia fix my jacket if it ever comes to that—they’re great about making repairs like this for free. Otherwise, these are fine jackets but a little heavy (why do they put a hood liner in a three-layer jacket?). The North Face Kitchatna was fine design back in 1990, but the hood is too huge, the taslan should come all the way down the sleeves, and the stitching I’ve examined in recent jackets looks like sewing done by a drunk or a child. I’ve only seen Sierra Designs Gore-Tex parkas at their outlet in Emeryville, but they have a reputation for being heavy, with good venting and hoods.

Torre jackets rarely are discounted (I got mine for $150 off a mannequin at a Patagonia outlet), but they may become more available as they are replaced in stores by the new Gore-Tex XCR Ice Nine jacket this fall.

The '99 Torre is improved over the previous model. Not much, but on some essential points this super-parka became even more super. The pit-zips are equiped with double zips, which are easier to operate. An inside pocket was added and the drawcords of the hood are equiped with a new, plastic retainer.

The jacket is extremely water/windproof, is excellent for skiing, backpacking and even everyday use, although a bit decadent for this purpose (but who cares). Even cycling is no problem, since the breathability is excellent.

Note: the shoulders and arms are made out of one piece of nylon, so there are no seams to be abrased.

This is an excellent specimen of the 3-ply expedition parka, probably the best I 've seen since Moonstone's Sauvage (no longer in production). The Torre has a great hood, big enough to hold a helmeted head, easily adjusts for smaller volumes, and has a simple one-hand adjustment system. The chest pockets hold lots of stuff, and the reach-across entry means you can get into them despite whatever combination of pack straps and slings are strewn around your torso. The arms are long enough, and the cut keeps your wrists inside even when reaching for that high tool placement. Length is good for climbing/skiing/etc. I haven't worn it in the rain yet, but so far the jacket has shrugged off wet snow, sleet, high winds.

About the only thing I can find to complain about is that the long pit zips are rather hard-running (they use the new water-resistant type zipper, which means they can get away with single flaps over the pit zips - a nice touch); the zips have started running more freely after some use, but they're still stiffer than others I've used. Also, with pit zips this long (into the torso) they should make the zips open from the sleeve end rather than the body. The slider can end up trapped under pack straps so you have a tough time opening the zips. I'd still recommend the Torre highly.

Women: be advised that the torso cut is BIG; you may find yourself swimming around in there. The very similar Triolet (same basic design in a 3-ply H2NO Storm) comes in a woman-specific cut; I've heard good things about the proportioning.

This jacket is amazing. It comes in seven different colors. It's durable, repells moisture, and movement is so incredable that it feels like your wearing a wind breaker. I've been wearing this jacket for two full winter seasons and not a stitch has come unraveled. If you're looking for a new jacket for any outdoor sports I advise this unbelieve heater/2nd skin. 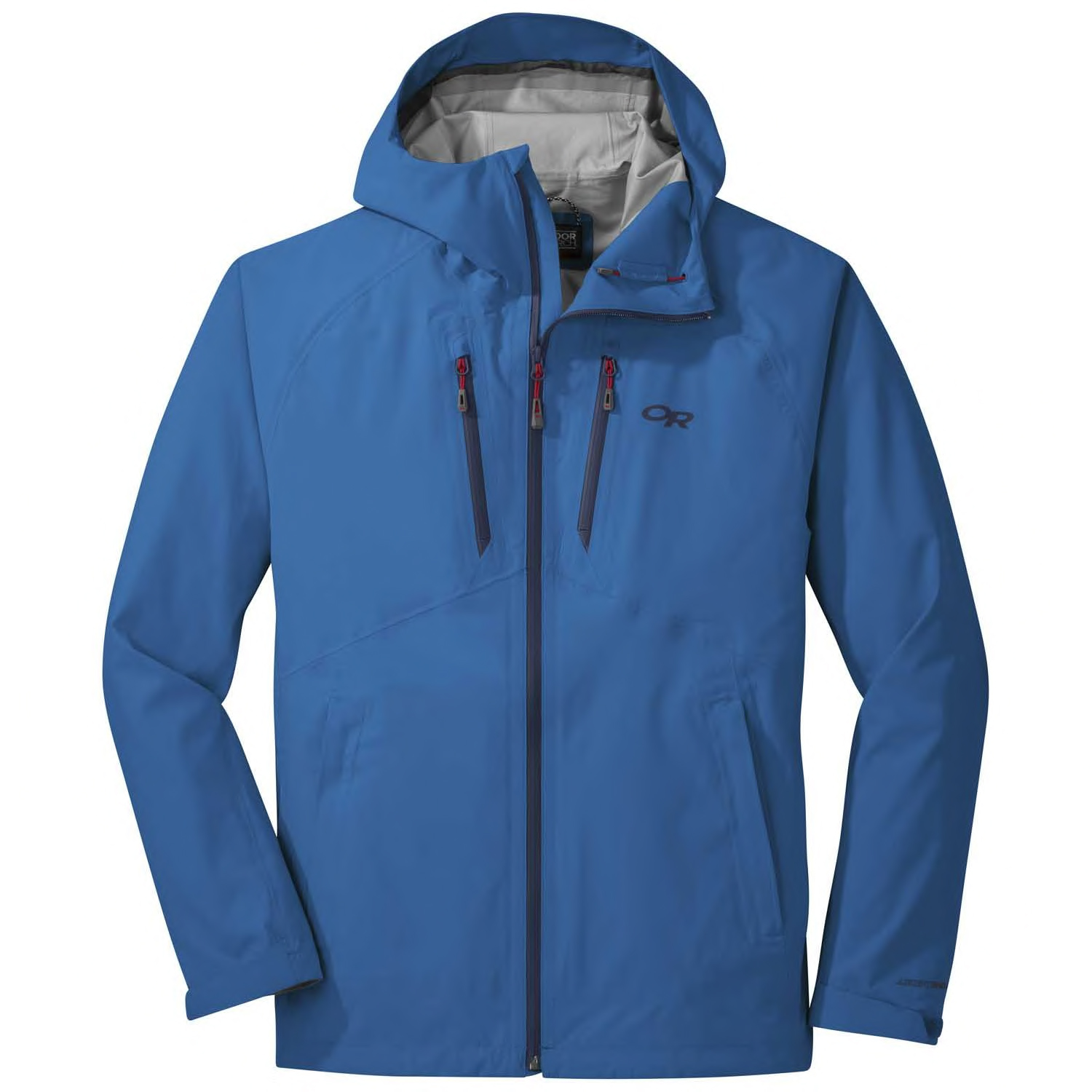 Trailspace in the Backyard