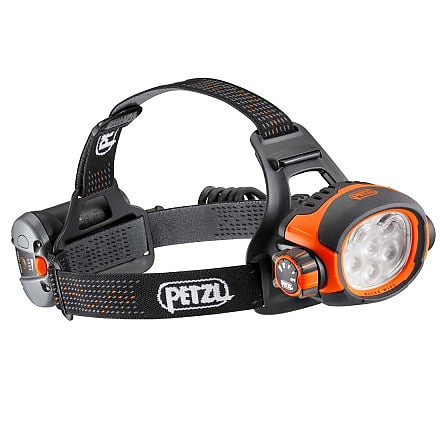 Horrible battery life and Petzl doesn't back them. Batteries cost $125 each and I have been through three batteries in 2.5 years.

I thought the Petzl Ultra would be the best headlamp I could buy, but I am not at all happy with it. I’ve purchased 3 more batteries in the 2.5 years I’ve had my Ultra and none of the batteries will last more than 40 minutes (in the 2nd position) including my newest battery.

Some of the batteries just go dead in use — no warning blinks — just total dark. Try running as fast as you can on a trail and then have your headlamp go totally out on you without warning. Heaven forbid someone actually goes caving with one of these.

I have bought Petzl Ultra for mountain biking at night, but I am currently using it at my work, about 1km underground, on a South African gold mine.

As a geologist, I ventured into using LED lamps, as they reveal rocks in their true colours, and thus enable more accurate observations. However, Petzl Ultra blew me away with further crucial improvements:

1. Wide beam- it gives me better 3D perception of geo. structures, as well as it leads me to notice danger sooner. With Petzl Ultra I normally build a higher awareness of everything, concerning my work and well-being in tunnels and stopes, and with "Ultra" also I achieve this much faster than before, when I had to "pan" my surroundings with narrov beams (bobbing my head like a chicken, and "composing" complete image in my head from multiple "scans"). Similar experiences of enhanced safety with Petzl Ultra also came from camping, climbing, biking and caving. Wide beam means safety in every environment!

2. Toughness- on top of now "seeing it all", I am however still accident prone (personal trait), and I bump my head regularly, so I can report that I knocked the lens of my Ultra into a roof bolt underground and into each and every "suitably" positioned hangingwall rock that "came my way" -yet I don't have any scratches on the lamp, to prove it!

3. Adjustability- I can angle the beam respectfully down to my feet, when I talk to my bosses, and point it straight ahead "on full", when questioning a subordinate (very strong intimidating effect). When walking on flat, angling the beam down, is a major plus. And the best of all, the beam is so even that I can read books and newspapers underground (not that we ever do that, of course).

1. Focusing- I hope at Petzl they are working on a focusing mechanism, which would enable a shift from wide beam, to a focused, concentrated one, as the later is occasionally needed as well, -to illuminate smaller areas, further away.

2. Strobe Mode- for the accident prone please, a strobe mode is required.

3. Price- the hard hat, we are all wearing in S.A. underground, costs 2 dollars, so days all miners carry Ultras are as close, as colonization of Mars, but professionals and management should be able to get themselves Ultras already: but wider introduction underground may be subject to industrial testing, aimed to certifying these lamps as safe in methane-prone environments. I hope Petzl will recognize the potential for the use of this lamp in industry, and have it sealed and tested. They can also make the cable a bit thicker (is it rat-proof? -marine applications).