The Spirit III GTX has been discontinued. If you're looking for something new, check out the best backpacking boots for 2023. 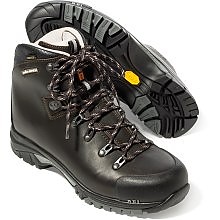 Bought a pair of size 12's two months ago for hiking on the island of Guam. The boots looked nice and appeared to be very tough and well built, their appearance was deceiving. The terrain here is very rough with lots of sharp limestone, coral, and weathered lava rock.

The first day I scraped the sides, cut up the soles and wore completely through the soles in the arch area of both boots. Within a week the soles were beginning to separate. Now after two months hiking between 2 and 7 miles 2-3 days a week the soles are separating and cut to pieces. The boots are next to useless.

The boots fit well, and felt good, but they did take some getting used to. I've developed lots of blisters in the last couple of months, but that's probably mostly attributed to breaking in my feet rather than the fault of the boots.

I contacted REI about warranty and/or repair and was informed there was no warranty and that REI doesn't repair boots. They did offer me the number of a cobbler in Seattle WA. I won't buy another pair for hiking, but they'd be a fine choice if you trekking is limited to the mall.

I needed a sturdy hiking boot for mostly dayhikes on- and off-trail in the Sierra Nevada and this sturdy looking boot fit me quite well. It took some time for the boots to break in but then they were comfortable and provided solid support and very good traction on difficult terrain (scree, talus, class 3/4 rock). Unfortunately, after only about 150 miles of hiking the sole separated from the rest of the boot and I was glad that I could make it back to the trailhead. I was expecting a boot this expensive to be of higher quality. Fortunately, REI allowed me to return it.

My 8-yr-old Vasque Sundowners are on their last leg, so I've been in the market for a replacement pair of all leather, gore-tex backpacking boots with superior ankle support. Looked at Vasque, Lowe, LL Bean, and Asolo. Almost purchased the Asolo Powermatics even though they didn't meet all my criteria or really fit well in the toe area. Very happy to visit an REI store in Minnesota (Bloomington) b/c there are no REI's in Ohio. Regular price on them was $189... a little cheaper than the Asolo Powermatics at $239. Have treated them with three coats of Nikwax Conditioner to soften the leather. So far, they seem like a wonderful replacement.

Excellent boot. Fit well out of the box, didn't have to break them in. Great construction. Very satisfied, was looking at Asolo, Lowa, and Garmonts. Highly recommended!

This boot fits me extremely well and is the most stable backpacking boot I have worn...However, I bought a pair and the next morning hit the trail with a very light load for a short 5 mile hike to start breaking them in. In that first five miles the vibram soles on both boots split and started to separate from the soles.

I took that pair back to REI and of course they graciously let me exchange them. So the next day I took my new brand new pair on a 7 mile hike, hoping against all hope that the first pair was a fluke...lo-and-behold, the same result. This pair is also going back to REI and I will be switching to another heavy backpacking boot...I just hope whatever other brand I end up getting fit as well as these did.