The Talus 50 Pack has been discontinued. If you're looking for something new, check out the best weekend packs for 2020. 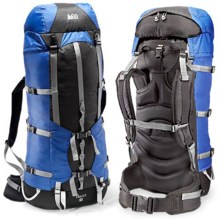 I used this as my 3 season backpacker and also for a few years travelling abroad. From 13,000 feet to Asian jungles, and high deserts, this pack kept me going. I am very hard on gear, so it took a beating. I know, surprising for an REI brand bag. I stuffed it in an army duffle for airport baggage handlers.

My spec sheet said it was about 58 liters, but I think it was more because all the 65-70 liter packs I have seen lately are all smaller than this was. I just loaded the REI Mars 80 pack nearly to the top and placed in my army duffle bag to compare. This seemed to be the same size. This is a mystery to me.

I overloaded this pack with books, wood, and marble carvings...definitely in the 70 pound range. I was always comfortable and could still run for the train or bus. I liked the side zip for easy access on the hotel floor or my tent. Although, I was a bit afraid I would blow out the zipper with my over-packing, that never happened. I did have to sew a few strap attachment points, for the obvious overload reason coupled with throwing it off of bus roofs and over small cliffs while backpacking in Borneo.

The ripstop nylon held up to the jungles and California cactus, just not the Bluejays fed by evil campers. I like the simple cylindrical design with a narrow profile because I did have to squeeze by a few rocks.

I loved the compression straps on the side because I could lash anything down on either side. I liked the front snowboard (although I used it with my skateboard) cinching set up and the small daisy chain. The two biner loops had a plastic coating and held up well on my climbing trips.

Drawbacks for me? I had to have a drinking tube port sliced and sewn because my version did not have one. I could have used small side pockets at the bottom to have a cup-like holder for some of things that I lashed on the sides (to prevent things from sliding down).

Most of the new packs seem to have flimsier material and plastic added to the harness, which makes it both less tear resistant and heavier, not to mention the breaking plastic to ruin your trip. This has been a surprisingly difficult pack for me to replace.

I use this for everything except the longest or highest mountaineering trips. I used it on Eldorado, and it carried all the gear I needed and more. I had the rope, pickets, wands, tent, and all my personal gear, oh yeh, and a shovel, and it carried fine. It is only about 3000 cubic inches, but it has tons of compression straps. Some people don't like the straps, but you can strap pads, ropes, pickets, bear cans, and a hundred other things on the outside with the straps. I love this pack. A pity they don't make it anymore. If you have found one, I would definitely get it. 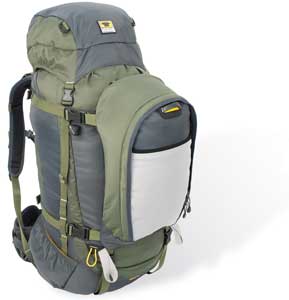