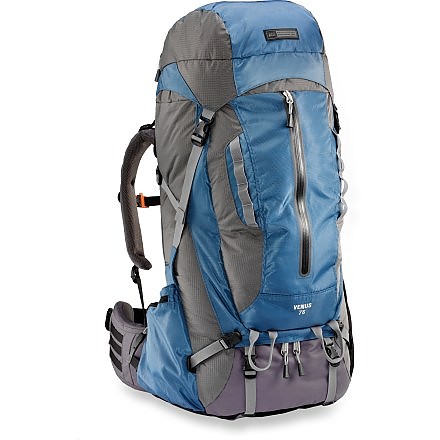 So, I didn't buy it, but I did help my girlfriend select her pack. She absolutely LOVES this pack!!! It is, by far, the most comfortable pack she has worn. The Mars pack and Venus pack are virtually the same, except that the shoulder and hip belts are contoured for their respective genders. As my girlfriend has very feminine hips, the straps really made the difference for her.

Carrying about 35 pounds of gear, about 40% of her own weight, she felt no strain on her back, as the pack positioned the weight properly on her hips. The cinching straps above the shoulder pads made the pack feel closer to her back and more controllable. The added bonus is that there is a concave portion to the pack between the shoulder straps to allow her head more space to straighten her neck. This allows her to pick up her head without hitting the pack... No more constantly look down on the trail for her!!!

Getting stuff into and out of the pack is extremely easy as it not only can be loaded from the top, but it has a zipper opening to allow easy access from the back of the pack. The pack itself seems well constructed as the material seems sturdy and the zippers seem well protected against water leaking in from the outside.

I would have given this pack a 5 stars out of 5, but my only concern is the lack of more compression straps. I have an old Dana Design pack, I think Marmot took that company over a while ago, but I've always been a fan of packing my bag in a modular way to fit whatever gear I may be hauling. So that might be the only gripe. That is not to say that you can't compress your gear down at all, It's just that there aren't as many straps to do so as my own pack... So it's more of a relative comparison. I have a network of straps combining to about 3-5 points of compression on my pack, so it maybe a bit tough to compare. My pack is also a 5000 cubic inch pack while this one, in the small model just tops 4500 cubic inches.

In summary, the pack is FIRST AND FOREMOST, comfortable, and in my opinion, the most important feature of any pack. And secondly, is well constructed for durability. I highly recommend this pack to those who are considering a GREAT pack for a cheap price... relatively cheap, I guess.