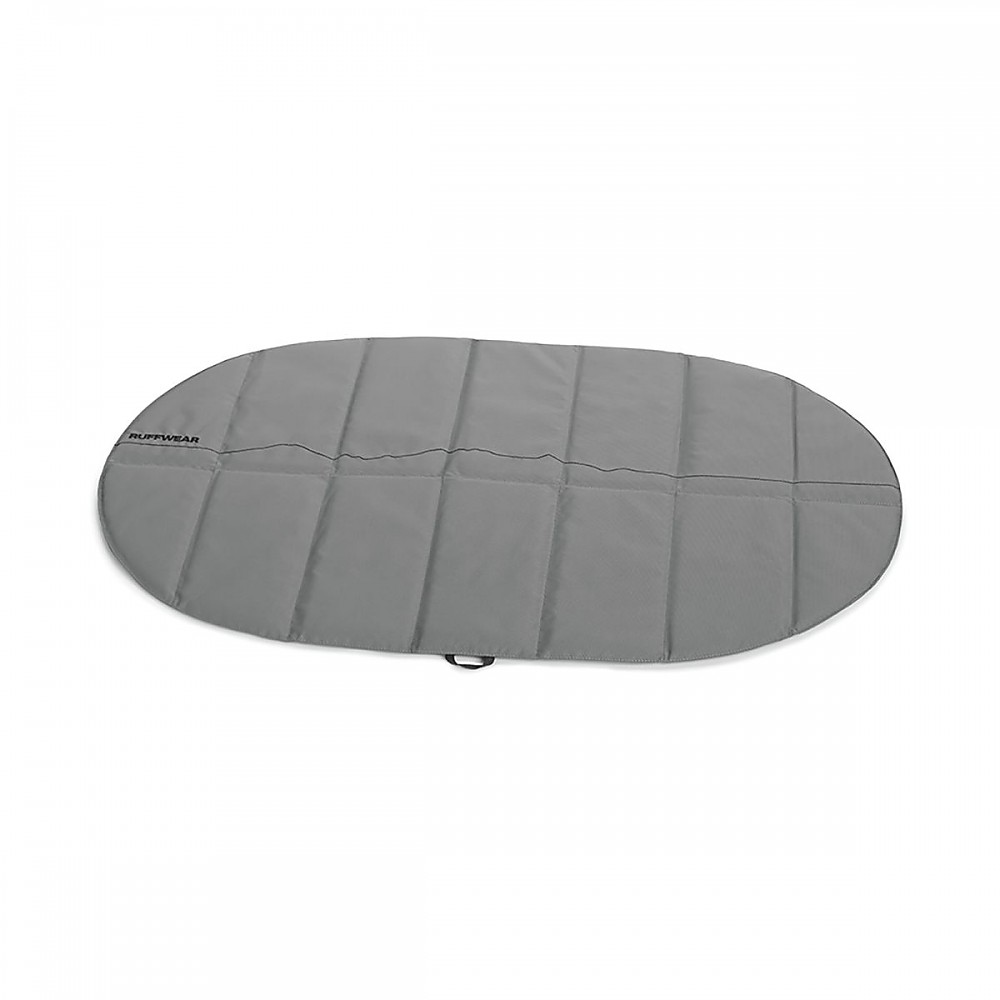 The Ruffwear Landing Pad is an easy to use, durable, canine-friendly sleeping pad. It has performed well in environments ranging from backyard evening retreats to overnight backpacking adventures.

Only one size is available, which may be a limiting factor for large breeds. Additionally, packability should be considered when planning overnight excursions.

I tested the Ruffwear Landing Pad along with my 5-year-old Vizsla, Roland, as a member of the Trailspace Review Corps. Roland and I traveled in and around the White Mountains of New Hampshire from August through September of 2015. Roland and I also tested the Ruffwear Highlands Sleeping Bag during this time, which is compatible with the Landing Pad. 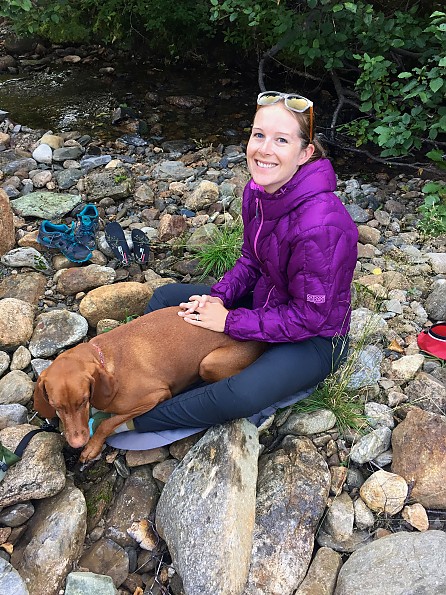 Roland and I sharing the Ruffwear Landing Pad

Vizslas are known for many things. Lovingly referred to as “the Velcro dog,” they are expert snugglers who, in my experience, insist upon direct physical contact at all possible times. They are also renowned for their exercise routines. I recall a day within Roland’s first year of life when I neglected to provide his morning walk before leaving for work. Upon my return that evening, Roland promptly notified me of my oversight by breaking out of his crate and sprinting laps around our living room sofa with such vigor that I became concerned he might wear a track in the carpet and cost me my security deposit! From that day forth, Roland’s morning walks have demanded priority.

In Roland’s five years of life, he has also become known in our family for his narrow comfort zone. He loves winter, but requires a full snowsuit to venture outdoors. You’d assume a shorthair dog would relish in the warmth of summer, yet Roland has been known to protest the heat on hot hiking days by rolling in a puddle of cool mud and refusing to travel on. Rainy days are nothing short of disastrous as he demands exercise but is unwilling to pass the threshold of our front door, insistent that his paws will melt in the rain.

In other words, Roland is 55 pounds of high maintenance, demanding daily exercise with limited tolerance of weather. Fortunately, the folks at Ruffwear have him covered. The Ruffwear Landing Pad is a closed cell pad, the canine equivalent to a sleeping pad. It can be used independently, or integrated into the Highlands Sleeping Bag, or the Highlands Bed. 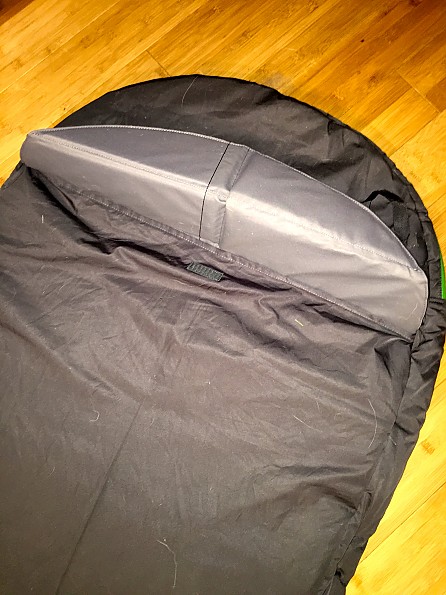 The Landing Pad requires virtually no forethought beyond remembering to bring it with you on your next backcountry adventure. It weighs only 7.04 ounces (according to the Ruffwear website), and is easily transported to a backyard campfire or into the backcountry without concern of adding significant weight to a pack.

While it seems to be designed for overnight trips, I can also see bringing the Landing Pad along on day trips. If your dog is willing to share, it would provide both of you with a comfortable place to rest at the summit without adding too much weight to your pack. It can be folded accordion-style (dimensions are 13 in by 6 in by 4.5 in) and when laid out flat measures 34 inches by 25 inches, with a loft of 0.4 inches (according to Ruffwear, and confirmed by my ruler). 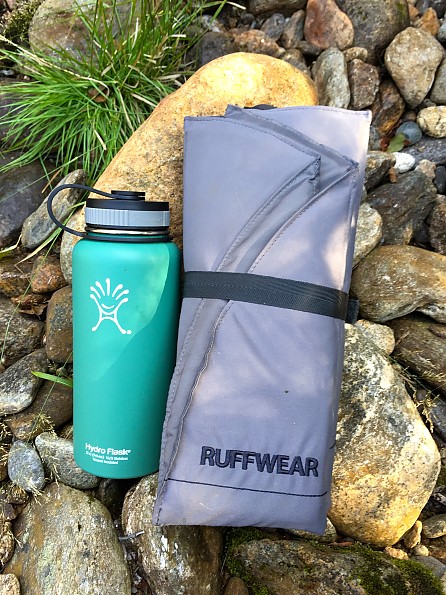 Landing Pad folded next to a 32oz insulated water bottle

The black strap in the above photo is attached to one side of the Landing Pad and wraps around the pad when folded to keep it in place. The strap secures with Velcro and has maintained adequate hold over the time we've used it. I like that it's attached to the Landing Pad as I don't have to worry about losing it. However, it tends to get dragged about for that same reason, picking up some dirt and a little extra wear along the way.

While the Landing Pad is the perfect size for 55-pound Roland (Roland's topline measurement is about 23 in and his girth is about 30 in), it should be noted that it is only available in one size. Smaller pups may enjoy the extra real estate, while I imagine large dogs, especially those who prefer to spread out, would require a more spacious option.

One challenge for me (a benefit for Roland) is that the Landing Pad does not fit in his pack. He wears an OllyDog pack (which I believe has a total capacity of 7.5 liters, 3.75 liters on each side). As you can see in the photo below, the Landing Pad straps easily to the outside of my pack, and truly the weight difference was not noticeable. However, it would have been nice for Roland to be able to carry his own gear. 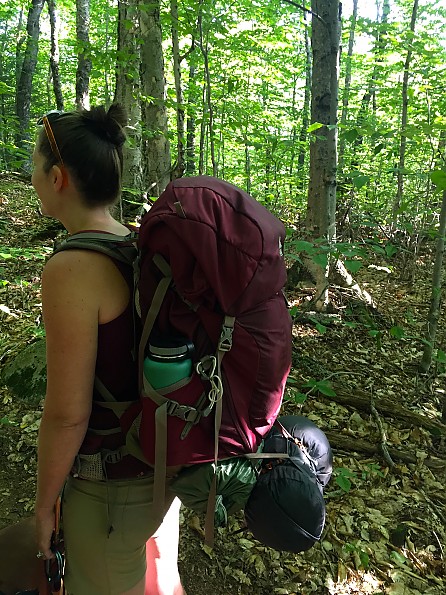 Landing Pad is shown in the green stuff sack (the Highlands Sleeping Bag is next to it in the black stuff sack).

While not waterproof, the Landing Pad is water resistant. On our most recent backcountry adventure, we camped along a river. The Landing Pad was great for Roland, as I laid it out on the river rocks as a place for him to relax in the evening. 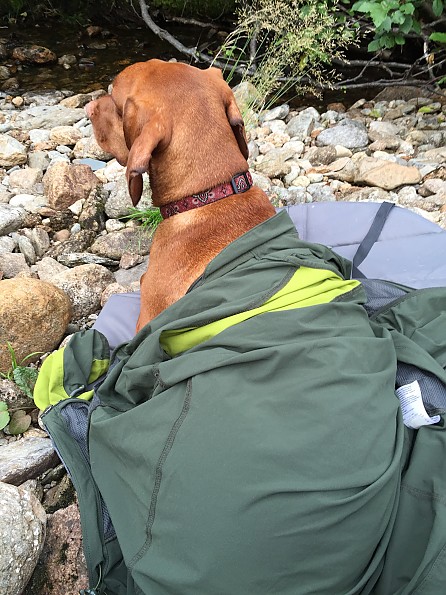 He had been swimming, and I didn’t want to get the sleeping bag wet as the temperatures tend to drop during the night. The landing pad was dry enough by evening to be stuffed into the sleeping bag, and provided an excellent cushion—to which I can attest to as I forced Roland to share the following morning over breakfast! 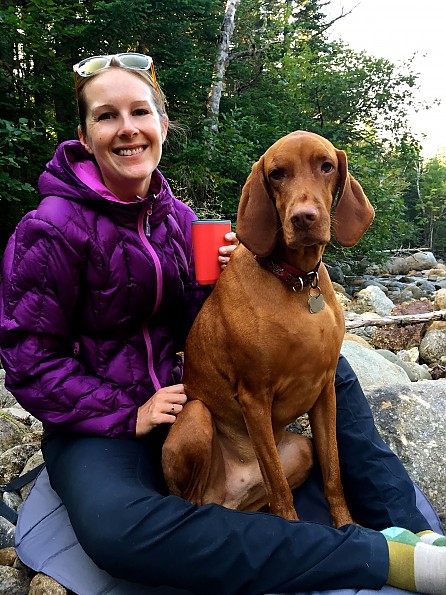 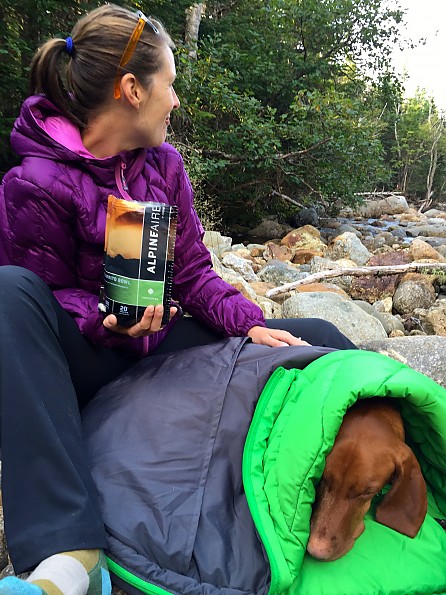 I imagine that a dog with long hair who spends a lot of time in the water would do better with a closed cell foam pad that is essentially waterproof, rather than the Landing Pad, which is only water resistant. For years we've used an old Thermarest closed cell foam pad that used to belong to me but has since been cut down to Roland's size. It's worked well. Such a pad could even be cut to the shape of the Highlands Sleeping Bag and used instead of the Landing Pad if desired. The benefit of the landing pad is that it is more packable than the one we were using.

As Roland and I used the landing pad during the late summer and early fall, we certainly didn't test the lower limits of its insulating properties. Temperatures ranged from 60-80 degrees Fahrenheit during the day and 50-60 degrees Fahrenheight. Roland used the Landing Pad in conjunction with the Highlands Sleeping Bag when he slept at night. He seemed warm and toasty throughout.

For dogs like Roland who need a little extra insulation when sleeping outdoors, I would suggest using the Landing Pad along with the Highlands Sleeping Bag or another product such as a dog blanket.

It would be interesting to take the landing pad along with us in the winter to provide Roland a warmer and drier alternative to sitting in the snow. If I have the opportunity to do some winter testing with the Landing Pad I will update this review at that time.

Roland has a tendency to, let’s just say, make things his own. He is known to “swim” on freshly vacuumed area rugs, and use his teeth and paws to “fluff” dog beds that have been flattened over time. It should also be noted that Roland has the world's longest dog toenails. Literally, the last time he tolerated a pair of toenail clippers was in the veterinarian’s office under a heavy dose of puppy anesthesia due to a face-full of porcupine quills. The Landing Pad has withstood Roland’s incessant need for nesting, and has endured his ridiculously pointy toenails without incident.

Laundering instructions indicate that the Landing Pad can be hand washed with mild detergent. The shell cannot be removed, as there is stitching between the folding foam pads. However, I've had no problems keeping it clean and relatively free of any obnoxious odors. All of this being said, Roland is a shorthair dog, and fortunately tends not to take on that wet dog smell.

I hand washed the landing pad to test out how it would respond to washing. It is easily cleaned with a little elbow grease.

The Landing Pad retails for about $30. Looking around online I wasn't able to find any comparable products. I did find that others are either repurposing their old sleeping pads or simply purchasing inexpensive sleeping pads that can be cut down in size to fit their dog.

Personally, I find the $30 price tag pretty reasonable given the use Roland has gotten out of the Landing Pad over the past couple of months. I don't see it as a completely essential product to backpacking with a dog. However, it's a relatively affordable option for providing your dog with a little extra comfort along the trail.

Based upon my observation, Roland has thoroughly enjoyed his foray into gear testing with the Ruffwear Landing Pad. He has found cushioned comfort upon what would otherwise have been a bed of river rocks, and has nested to his heart's content, while the Landing Pad has remained in one piece.

I hope that someday my high maintenance dog will develop the capacity to carry his own camping gear, but this is a concession I’m willing to make on short overnight adventures when the extra weight of carrying the Landing Pad is virtually undetectable. 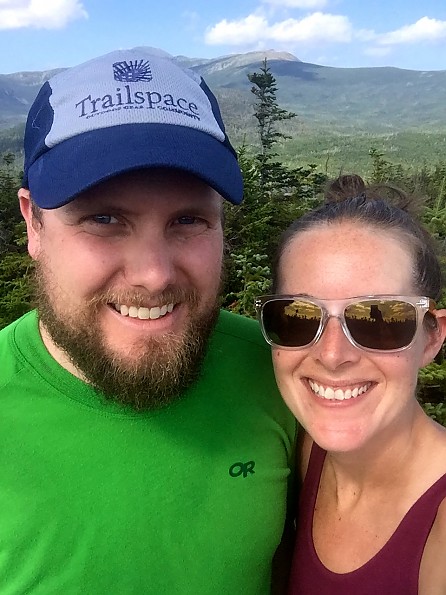 Thanks to Ruffwear and Trailspace for the opportunity for Roland's first gear testing adventure! Thanks as well to my husband, Jim, for his photography contributions and for representing Trailspace at the summit!

Source: received for testing via the Trailspace Review Corps (Sample provided by Ruffwear for testing and review)

Fantastic reviews, Kelly and Roland! Thanks to both of you for doing such a thorough job testing out the Landing Pad and Highlands Sleeping Pad. 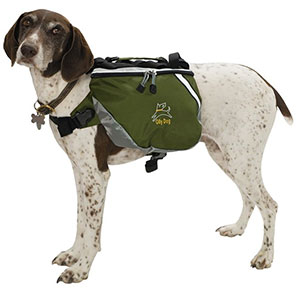 Trailspace's community of gear reviewers has field-tested and rated the top dog gear.