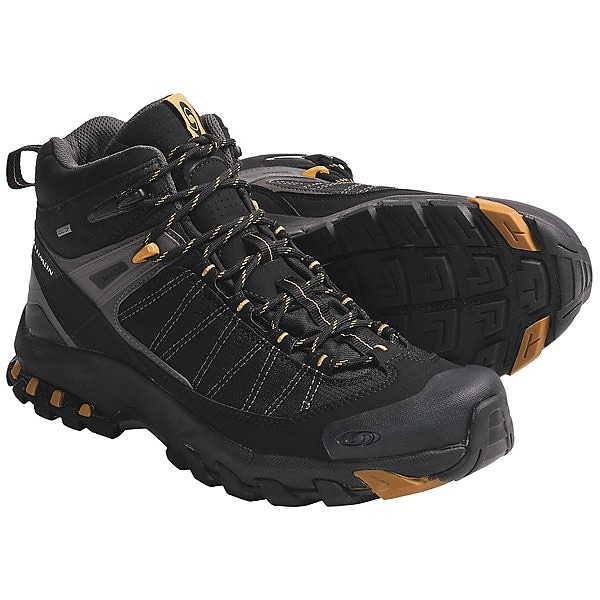 Solid, capable, out of the box boot, that won't ruin your bank account—or mine anyway. So far, I have gotten three John Muir Trails and a few other Sierra adventures out of these boots and only seeing real wear on the uppers, where they meet the rubber.

Fit: I bought the Fastpackers and put about three hours of easy trail walking on them before I put them to the test on the JMT. The first day out of the valley tends to ruin a lot of feet, with all the uphill—but the Fastpackers, didn't give me any problems.

Comfort: Having now done the JMT twelve times, I can honestly say I've probably done at least six of them in sandals (but that's another review) due to always having to switch out from my heavier boots and the discomfort they created (I did the first eight or so, in a pair of Fabiano leather mountaineering boots. Overkill) —that is, until I got smart and went lighter.

I tried a few REI brand boots and while they were great and good to go, out of the box, they fell apart quickly. The Salomon 3D Fastpackers have not only held up well, but more importantly, they've never given me a reason to take them off.

Support: I'd be happy if they'd add an inch more ankle support, but I can't complain and as for the soles, they take the sharp edges of granite very well, laterally, across the entire forefoot, but seem a little soft right through the middle––but again, no real complaints.

Traction: They go well from slushy puddles to shiny granite.

Temp Control: I like to wear gaiters, but a lot of people think they keep your feet hotter—they might, but this is one detail I've never bothered to be bothered by. I've used the Fastpackers, mostly in the hot summers and I've never felt like my feet were too hot. I've also used them in spring conditions, with slushy snow, where of course, they did get a little wet, but seemed to dry quickly.

Features: I like that they are fitted with standard shoe strings and not the cinch/draw type of system on some of the other Salomon shoes.

I'm hoping to get at least another five hundred miles out the Fastpackers.

The beauty of these boots is the luxury on not having to think about your feet. It may surprise you to read that I ditched my Asolos for this boot.

The rep at EMS kept trying to tell me that these boots were only good for day trips and light pack situations, and it is true that the sole of this boot is softer than the Asolos. However, the comfort and fit of this boot surpasses all the others by such a margin that the extra comfort and lighter weight decreases my fatigue far more than the bonus of having a stiffer sole.

The only time I've missed my Asolos was doing a steep climb in loose dirt where the sharp stiff soles of the Asolos excel. The rest of the time I was pleased to have the comfort and weight of these boots.

In my opinion, unless you're doing heavy-pack highly-technical ascents, these boots are golden. That being said, my wife believes that I'll go back to the Asolos in less than a year.

This is the first pair of civilian boots that I've owned, in a while. Trying them on, at the store, I was instantly surprised at how well they fit. While I don't look forward to if I will experience similar wear, with these shoes, such as another reviewer has related, but for now they seem quite solid. These are some of the lightest, most stable items of footwear that I've had.

Besides the comfort inside the shoe, I especially like the way that they made the outer toe reinforcement, in a layer of rubber conforming to the shape of the toe as it does. It's a sleek outer surface, on these shoes, nothing sticking out to collect mud. The plastic eyelets, near the upper, seem to have been a pretty good idea, as well.

I bought a pair of these at a Missouri-local outdoors gear store, Dynamic Earth. Truth be told, the outer appearance of the shoes was one of the items on the top of the list of deciding factors, for the purchase. I wanted a pair of black hiking boots - I suppose that that would be, largely, a matter of personal preference. Fortunately enough, they had these in stock. I don't foresee that I'd be disappointed with this item of footwear, at any time in the future.

So light! So tough. These shoes are amazing. Great heel and ankle support, very versatile and sturdy.
The only drawback is they are a cold/wet weather shoe. Not great for hot days — they are very well insulated considering how light they are, which limits breathability.
But otherwise these are awesome general hiking boots.

So light! So tough.

These shoes are amazing. Great heel and ankle support, very versatile and sturdy.

I've done several long hikes in these and have had no issues.

The waterproofing holds true — and they are very easy to clean.

Great traction and grip — again considering how light these are, it's amazing to think the rubber is so strong.

Nice strong toe cap and rubber case — no sign of breaking or peeling the glue.

After several treks, still no smell, which is a nice relief.

The only drawback is they are a cold/wet weather shoe. Not great for hot days. They are very well insulated considering how light they are, which limits breathability.

But, otherwise these are awesome general hiking boots.

I read many reviews and bought the last pair of the grey/red ones from MEC (Canada, check it out) in Nov of 09, and have used them 4 days a week for hiking and gardening in the PNW this El Nino winter.

I am a true 12.5, but got the 13s, and they initially felt a bit narrow. Somehow they transformed quickly into very comfy boots. Not warm, but winter merino socks solved that when needed. When my gf and I hike we break into runs, and these bound along like runners. I do love them (and her).

I use REI desert gaiters (low and minimal) on these because the top of the tongue hangs open to collect all kinds of detritus without them, no matter how the laces are tied.

Unfortunately, after 4 months they are falling apart kinda quick.

The leather/manmade outer bands above the sole are cracked, no longer black but a dull sea grey,
The manmade upper has split about a centimeter where my big toe's articulation causes a crease (not so water resistant now they ain't),
And the tread has begun to delaminate from the cushioning sole at the back of the boot.

I aim to return and replace these soon at MEC, hoping that I have better luck with the next pair.

I guess what I am saying is I would buy them again if I had the reasonable boot health insurance that you get at MEC.

Other than that, I fear that these are for light trails and maybe gallivanting around paved Europa.