The Supercross GTX has been discontinued. If you're looking for something new, check out the best trail running shoes for 2022. 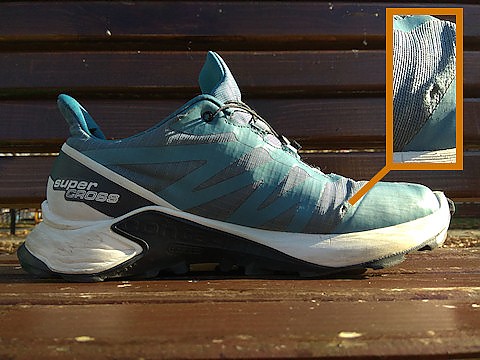 Great for running or hiking on trails in the nature for relatively short periods of time; not recommended to use for extended periods of time because the shoe upper doesn't allow the skin to breath.

Hi! My name is Adrian and outdoor activities are the type of activities I enjoy the most. I bought the Salomon Supercross GTX with the intention to use them for long multi-day hikes in the nature; I used them also around town.

When I first saw these shoes in a store in the town where I live I immediately thought they would be perfect also for hiking even if they were made for running, so I bought them spending 120 EUR.

At first sight they seemed great to me because I noticed they had a Gore-tex inner membrane, the material of which the outer shoe upper was made seemed ripstop, and the sole seemed to provide a good grip. Overall, at first sight it seemed the perfect shoe for my multi-day hikes and backpacking trips.

Then, wearing them proved as follows: indeed the Gore-tex membrane does its job very well (a few times I used them in showering rain for two-three hours around town and when I got back home my feet were completely dry), the sole does provide a good grip but only on dirt roads or on trails in the nature but not on paved roads (on paved roads the sole behaves like any other, and on wet paved surfaces the adherence is reduced just like most of the soles of outdoor shoes), but the material of which the outer shoe upper is made of (similar to plastic) is not ripstop (only looks like ripstop but is not ripstop) and doesn't allow the skin to breath so after about an hour of using them (no matter if the air temperature is warm or cold, I used them both in the summer with temperatures around +30°C and in the winter with temperatures around -5°C) stains of sweat start forming on the shoe upper around the shoe cap, as displayed in this photo below.

These stains of sweat always form on the outer shoe upper, no matter if outside the air temperature is hot or cold, summer or winter.

After few months wearing them, the outer shoe upper material broke on both shoes on both sides of each foot, close to where the shoe cap begins, as displayed in the photo below.

What I noticed is that as soon as such holes formed in the blue outer material on both sides of each shoe, the stains formed by the sweat stopped to appear. Maybe I am wrong, but my immediate conclusion was that this plastic-like blue outer material that Salomon used to make the shoe upper doesn't allow the skin to breath.

Now it is almost two years I have this pair of shoes, they have these holes on both sides (which by now they are about three times bigger than that in the photo displayed above which I took soon after the first hole appeared, fact which proves also that the material only looks like ripstop but is not ripstop) but the stains of sweat never appeared again anywhere on the shoe since these holes formed.

Because these shoes seemed strong when I first saw them and because they were built for running they gave me the impression the materials used by Salomon in making them would allow the skin to breath, I felt disappointed when I first saw the stains of sweat appearing on them and I felt disappointed also when the outer shoe upper material broke—I would not buy the Salomon Supercross GTX again.

Maybe they are great for running for periods of time short enough so the stains of sweat won't appear, and maybe they can be amazing for people who like to spend 100 EUR every two months in a new pair of shoes, but for people who want a durable product that in the same time allows the skin to breath this is not the right product to invest in.

Thank you for your interest in reading my review. This was just my experience with this product, your experience can be different than mine.

Before writing this review I used this product (Salomon Supercross GTX) for almost two years at least one time per week for few hours.

Thanks for sharing your experience with these shoes, Adr1an. What do you have in mind to replace them?

I am thinking about something made by Scarpa or by Columbia, but I am open to other manufacturers I haven't tried yet as well.

Obviously so much of it depends on fitting your individual foot, but I've also had good luck with La Sportiva, which you might want to consider.