The Tundra Mid WP has been discontinued. If you're looking for something new, check out the best winter boots for 2022. 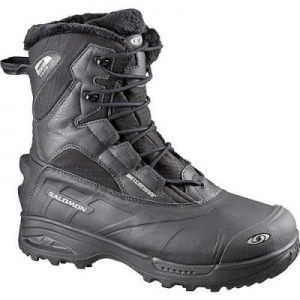 Yesterday was -16 with the windchill and about a foot of snow. Took them over to the field to get my dogs a run. While others were complaining their toes were going numb my feet were actually sweating!

Now with the price of these boots I expect them to be my snowshoeing/ backcountry winter camping boots, haven't had the chance to put them through those rigours yet but I'll let you know.

Like- the self locking eyelets work really well (it's a little thing but if I'm going to pay $200 I want the little things as well), huge pull tab on the back fits 3 fingers even with chunky winter gloves, bomb proof toe cap (thing looks like you could kick/knock/slam into anything with it and not feel it), lining at the top of the boot is extremely comfortable (not sure if it will wear away, we'll see), so far waterproof and just as warm as stated (obviously take all temp ratings with a grain of salt but -16 just standing around generating no heat leads me to believe an active -40 isn't out of the question.

Dislike- so far the only thing I dislike is that I found them a little like walking in ski boots. Not sure how much they will break in, unlike the previous reviewer mine are stiff. Not sure if mine are the exception or if his are, that's up to you to decide when you play around with them in the store.

Last weekend my brothers and I hiked a good distance to reach the family cabin. It was Sooooo cold that I could feel stabbing pins and needles in my winter boots in a very short time.

As soon as we reached the cabin and lit the wood stove I began thawing out my feet. My oldest brother slipped out of his boots and put his feet into some slippers he took to the cabin for the weekend.

Knowing that the air on the floor would be as cold as a witches tit, I inquired, if my bro wanted a place at the stove to warm his cold wet feet?

COLD AND WET, he laughed, as he handed me his new Salomon Tundra boots that I later found out to be extremely waterproof.

I grabbed the boots and slipped them on and the dry warmth made my cold feet incredibly cozy and comfortable. I was so comfortable that 5 seconds later I began to think about a cold beverage sitting in a box on the still freezing floor of the cabin.

The next thing I thought about was buying Salomon Tundra boots A.S.A.P. for my newly retired self and my nearly retired spouse.

My only concern was whether these boots would work with snowshoes?

Two mouse clicks later and I learned that these boots are made to accommodate a snowshoe :0)

These boots run very large and although extremely lightweight, the boot has no support around the ankle. Being a taller boot, every time i would bend my knees, the lightweight material would buckle and crimp. i noticed i could literally fold them in half and with me taking a casual stride, they looked like they would wear super fast with a repeated folding in half every time i step.

I found them to be laughable.  super warm feeling though i had not tested them in any conditions for i sent them straight back.