The XA Pro 3D XCR has been discontinued. If you're looking for something new, check out the best trail running shoes for 2020. 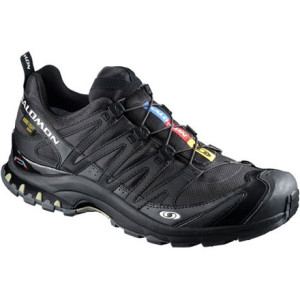 Hi!
these shoes are JUNK - a total waste of (a lot of!) money. Fell apart within 20 months, AND I NEVER RAN IN THEM (except maybe to catch a train...).

One of the speed laces broke (which was subsequently replaced free of charge by Salomon...but I don't count this as a big favor, because they're virtually impossible to replace by the costumer). Now the second one is frayed, but worse, it's frayed where it sawed through its own loop! I've had tread blocks shear off on both shoes too.

Furthermore, just behind the toe box, on both shoes, small tears in the fabric gradually expanded until they were about 12mm long. I patched them with AquaSeal (wet suit cement, we kayakers use it for everything), but the material is such CRAP that it began opening up again, just aft of the repaired areas.

Total junk (damn expensive Junque too). I have tons of other running, sports, street, and approach shoes, some of which I've beat mercilessly, none of them showed such signs of wear or just out and out fell apart like these. And the 'service' people at Salomon have been obnoxiously unhelpful.

Materials: the usual mix (Gore-Tex too..)
Use: STREET ONLY
Break-in Period: none, just wore 'em
Weight: very light - what attracted me in the 1st place
Price Paid: $140 (switzerland)

I love these shoes. They are very comfortable and the lacing system is awesome. The XA Pro has a great toe box that I was very impressed with. Gore-tex is something I always look for in products these days. I have been very pleased with these shoes.

Overall a great shoe for either trail running or light hiking. The rear of the shoe has a nice lip which allows a smooth transition forward while either walking or running. The lacing system is probably the best I've seen or used. I have not been able to really test how waterproof it actually is yet, but so far it has easily fended off puddles and mud holes with absolutely no wet stuff on the inside. It does get a little hot in the shoe, but I'm currently in 97 degree temps in Texas and it breathes well enough. On top of it all, the shoe looks bad. Definitely would recommend this shoe to trail runners, hikers, and adventure racers.

Price Paid: $95, I got a discount from the local store

The XA Pro 3D XCR is pretty good. It's Gore-tex upper keeps the mud and water away. It took about a day to get used to as the sole is stiffer compared to the Asics 1120 that I am used to wearing.

The downsides of this shoe is that as breathable Gore-tex claims it is... it isn't. It gets real stuffy in the shoe, but luckily they do make a version without the Gore-tex. It also doesn't provide the greatest traction on wet footpaths.

Our community of gear reviewers has field-tested and rated the top trail running shoes available.