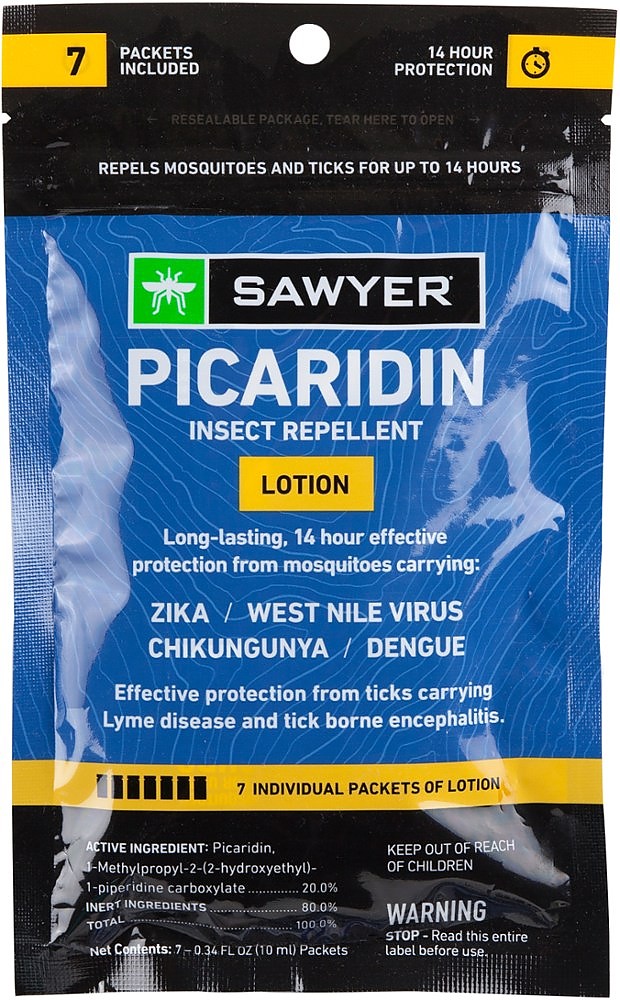 I have used DEET and other products since the early 1980s as mosquito and tick prevention for work and play, but now am a full convert to Sawyer Picaridin and Permethrin combination to keep the bugs away. Picaridin has similar effectiveness to DEET without the worries about plastic degrading and other effects on gear.

A recent forum thread reminded me I hadn’t reviewed bug protection products that I planned to write up last year.  With spring coming on and today being excellent gear-treating weather, I decided to finish this review.

My Reviewer of the Month prize last year included Sawyer Permethrin and Picaridin, both of which I have been using for a while. I will deal with Permethrin in a separate review, but wanted to mention it here as it is an integral part of my overall bug defense system in combination with Picaridin. 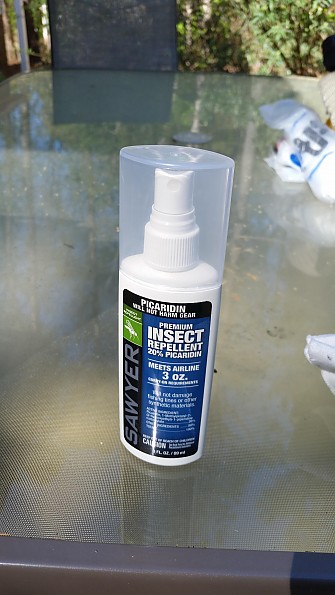 I have waffled back and forth with different repellents for years but have consistently used Sawyer Picaridin for the last year. This includes casual use on day hikes and backpacking in the Southern Appalachians, and for work along streams and in many different wetland systems with high concentrations of our voracious flying foes.

Previous insect repellent choices that I have used include:

Of these, only DEET equals Picaridin in its effectiveness on mosquitoes and other biting insects.

Sawyer sells Picaridin in spray (3 oz, 4 oz, and 6 oz) and lotion (4 oz) options. This review is of the spray, specifically the 3 oz version that I was provided as a reviewer prize. 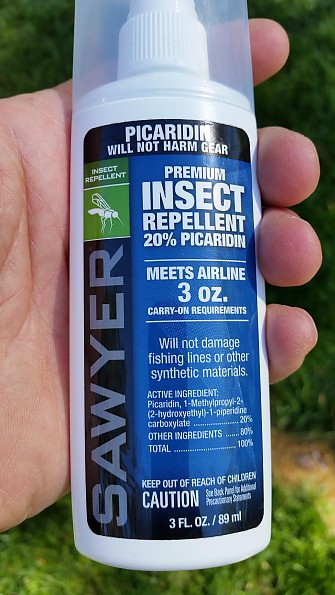 The Sawyer Picaridin spray contains 20% Picaridin in their “fisherman’s formula”. This is similar to levels of DEET in many products. Sawyer suggests that a lotion version may last longer than the spray, which is supposed to have all day protection. They suggest application after sunscreen (once it has dried). 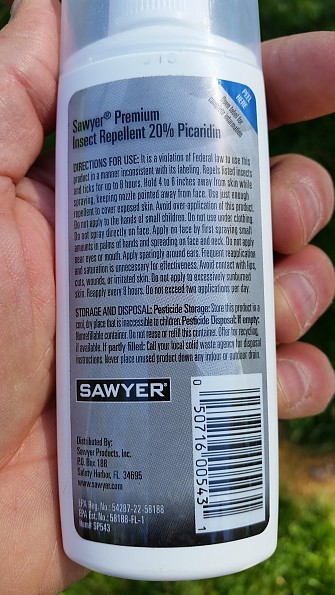 Applying Sawyer Picaridin is simple with the pump spray. I have not tried the lotion as I tend to wait until I get in the field to use insect repellent and at that point do not want lotion on my hands while working (operating a GPS etc) or hiking with trekking poles.

The pump action is easy to use and I have refilled the smaller three ounce bottle from a larger one with no issues as it is a simple threaded cap. The pump action is still as effective as it was last fall when I received the 3-ounce spray bottle, and my older ones still work as well.

Picaridin definitely doesn’t have the greasy feel to it that DEET products do, but does leave a sheen on the skin for a little while until it soaks in. The sheen should just be noticeable in the photo below but doesn’t last long as it dries quickly. 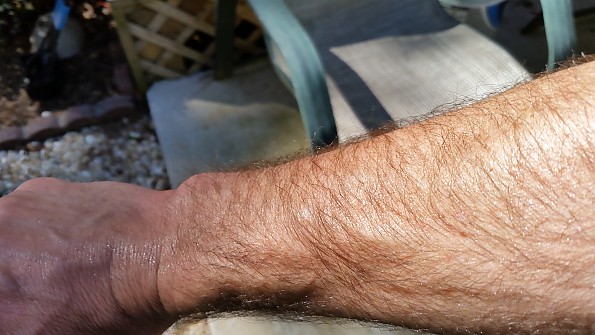 I find it hard to detect much of an odor with this product—a slight inoffensive smell at best and described as citrus by the website (I don’t disagree but also couldn’t quite pin down my own description).

The main reason I switched from the classic DEET products is the potential for that chemical to do damage to gear, especially plastic. Over the years working every week in the field, I have seen DEET damage tough plastic handles on soil augers, make GPS OtterBox screens illegible, and leave spots on the bumpers and paint of field vehicles.  For this reason alone, I prefer to use Picaridin.

Sawyer Picaridin seems to be just as effective as DEET products of similar strength. I usually re-apply after lunch if I am working and sweating a lot, so can’t really comment on the 12-hour effectiveness claim, but this was true for DEET and other products as well. Picaridin has proven effective against keeping mosquitoes at bay in almost all situations I encountered.

I have seen mosquitoes hovering around on many occasions and not even landing on me while wearing this product. I don't have any video or photos of this, as in those circumstances it is the last thing on my mind, but take the word of someone who hangs out with these little buggers a lot...this stuff works.

I should note that my assessment of the effectiveness of Picaridin is limited to mosquitos and other flying critters that I encounter, rather than ticks. I can’t comment on the tick prevention aspects, as all my field gear is treated with Sawyer Permethrin, and therefore may be responsible for the tick prevention. I can say that Permethrin alone has not proven effective against mosquitoes in my work, so I do feel confident in attributing the mosquito repellent qualities to Picaridin.

WAIVER: No matter what product you use, there will be times when it is not as effective. This may be due to your personal “attractiveness” to mosquitoes or the amount you sweat that day without reapplying etc. I have used the high concentrations of DEET and Picaridin in clouds of mosquitoes while working in swamps etc. and you will still get occasionally bitten during the day…but that is a circumstance that most people won’t run into on a regular basis.

Overall the performance of Picaridin is in equal territory with DEET, and doesn’t come with the risk of damaged gear. Therefore, in combination with Permethrin treated clothes, this is my go-to insect repellent for all circumstances. With the increase in Zika virus over the last couple of years I think this may well become one of the most important items you can carry in the appropriate season.

Source: received it as a sample, freebie, or prize (Trailspace - Reviewer of the Month Prize)

Growing up in the western Cascades of the Pacific Northwest I'm well acquainted with mosquitoes. In the Sierras they burn out quicker, but not as quick as I'd anticipated for a 10-day mid-July scamper that went above 9,000 ft for 3 days. They were insufferable in the high 8's at dusk; but above that so persistently thick it was at times literally hard to breathe without choking on them. They were so awful I very nearly skeedaddled for the lowlands.

Luckily, I did not completely rely on (errant) expectation and did have a repackaged ounce of Sawyer 20% picaridin. It's a relatively thick lotion not as messy as deet; I never noticed any odor from it; didn't have that initial oily feeling on the skin; great staying power (I only used about 1/3 oz over 3 days); and didn't stain my clothes. For all those reasons I don't hate it as much as high-octane deet. Neither do the bugs.

The potion gave enough relief that I could hike in relative peace. Lounging outside the tent or taking a joyful rest break just wasn't in the cards. The bugs were intensely pesky, though not savagely aggressive. (They clustered in a cloud and did not buzz in beak first like their more ferocious PNW kind.) I got bitten very little through the Sawyer; though at times it seemed in their zeal they'd ricochet off one another and get tangled in eyebrows or nose hair. They clearly didn't like landing on it, but unlike Jungle Juice it didn't drive them back enough to allow attention to other matters. Thus, with it I was able to complete my mission, and without it I would definitely have had to bail out.

Full disclosure: The dope was included gratis with another product from Sawyer. I only took it with me because I packed hurriedly and couldn't find any deet. I am beyond grateful for how it saved the trip. It will now be my standby (for times when dope is not expected to be necessary but insurance is prudent).

Source: received it as a sample, freebie, or prize (Sawyer)