The Cerro Torre has been discontinued. If you're looking for something new, check out the best mountaineering boots for 2020. 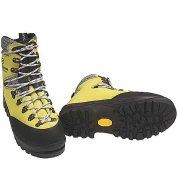 General impression: This is an extremely versatile boot, best suited for rugged terrain, heavy loads, and some winter travel including steep (though not vertical) ice and snow.

There were two version of this boot made, I believe the other was called the Thermic and was a stiffer, insulated version most likely better suited for difficult ice climbing. This yellow version, the standard Cerro Torre, has a small amount of flex in the sole allowing for greater comfort on long approaches but weaker performance on steep ice. It is uninsulated, though still kept my toes comfy down to about 15 degrees F. It took me about 40 miles to break these in, and it was a tough 40 miles but now they maintain an amazing fit.

Durability is good...only problems I've had are the metallic shoelace eyelets on the ankle breaking off, and the midsole near the toebox is deteriorating. Also, after 6 years they just aren't as waterproof as they used to be even with thorough Nikwax treatment. On dry rock they climb exceptionally, and for moderate to steep ice routes they allow for great sensitivity. The front toe welt is an excellent feature for a boot in this category.

Overall a sweet boot that would get 5 stars but the price is a bit ridiculous. These are discontinued and if you can get hold of a used pair for a reasonable price then go for it!

It's a beauty to look at, this yellow/black bee, but that's only in the shop. Two hours of walking or climbing with it in mud and snow will change that dramatically....It walks excellent on difficult terrain and rock, gives comfort, and you can climb with it, thanks of the rubber toe. The grip on rock is superior but not on wet snow or ice. You can easily put on any crampon on it to help you out.

I had some rust and corrosion on the inside of this boot at the metal parts and the Kevlar outside parts will flush a little.

It's comfortable, lots of grip on rock, ready to climb rock or ice with crampons, not stiff enough to hold long, a little overpriced. It will support you but gives your moves some freedom too. The lacing system is ok, they call it speedlacing?

It's a lite boot, and that count for me.

Our community of gear reviewers has field-tested and rated the top mountaineering boots available.