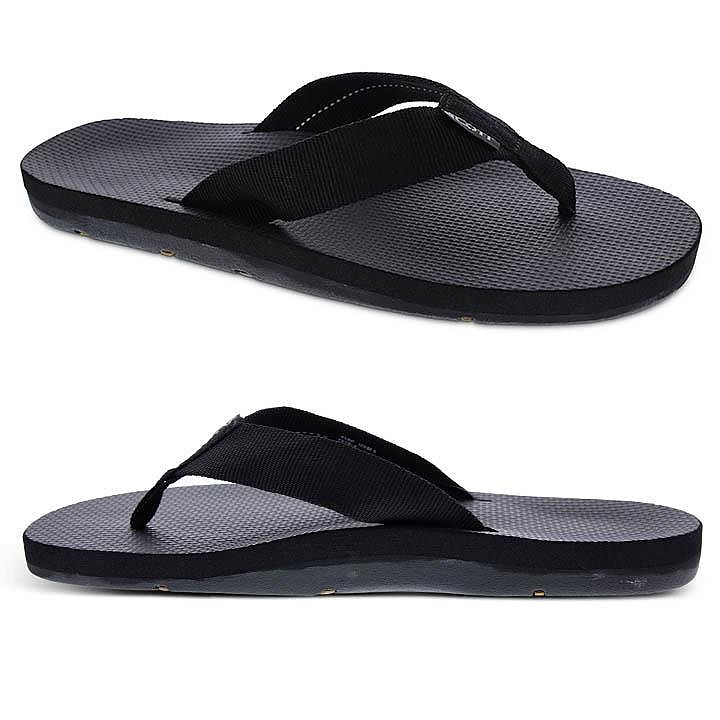 Sturdy, good-fitting flip flop that is relatively inexpensive and comfortable for extended wear. Solid sole/midsole with a more forgiving top layer, bomb-proof nylon straps that will never pull out. These have decent traction, a looser fit, and are extremely durable. Scott has been making flip-flops for eighty years in Hawaii—they’re clearly doing something right.

Scott’s website tells an interesting story about a shoemaker who relocated to Hawaii and opened a factory in 1932; World War II forced the Scott family to focus on flips instead of shoes. Scott Hawaii flips are still made in Hawaii today.  The Makaha is a men’s model with nylon straps—they also make flips with leather, rubber, and ‘vegan leather’ straps, and they make a number of female-specific flips.

I’m on my third pair of Scotts. The first pair were about twenty years old when our pup devoured the heel on one, and I just bought a new pair because the second pair is about 12 years old and look scrappy; they live in my car now. 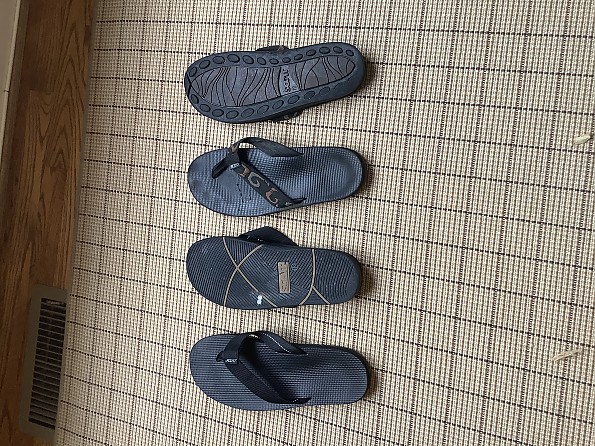 Scott‘s formula is pretty simple and hasn’t changed much in thirty years. Their soles are firm, solid, wear extremely well, and are made with some contour to provide some arch support. The straps are nylon and well-anchored to the sole, meaning I have never had them pull out, either the sides or the toe post. The wide straps are single-ply nylon, whereas the piece between your toes is actually a two-layer affair.

I wear men’s size 12. My old, well-worn flip flops (the top ones in the photo above) weigh 1.3 pounds per pair; the new pair, the black straps on the bottom, weigh 1.2 pounds. The "tops" of these flips, the part next to your feet, is soft and feels good under your feet. 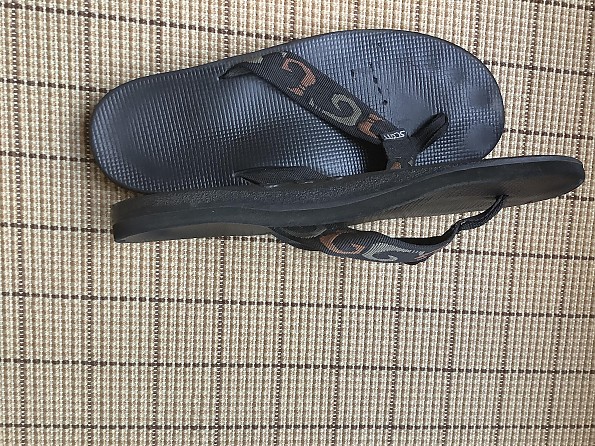 Old pair above, showing the contour of the sole...and a few puppy tooth marks. Note how the tops molded to my feet and toes. 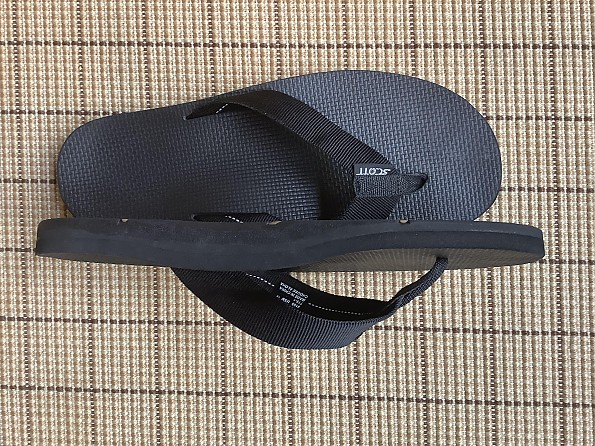 New pair above, virtually identical design and contour to the pair they replaced.

HOW THEY FEEL TO WEAR

The nylon straps are smooth and have zero break in. Wear them all day, out of the box, and they feel great. The straps on the newer ones are slightly wider than the older pair. The straps are a bit on the loose side, not so they feel like they’re going to fall off, but they don’t have as close of a fit as Chaco and OluKai flips I also wear.

I took some longer walks in these, and some of the alternatives feel more secure in terms of slipping and lateral support. It should go without saying that if you need a more secure fit, sandals are a better way to go than flips, but for getting your canoe from the roof of the car to the water or walking a few miles on a dirt towpath, Scotts are good.

With arch support, same observation. Scotts have a nice contour, but they aren’t as supportive as some other options.

These flips have very good, but not exceptional, grip. The old pair has deeper and somewhat more grippy tread around the edge and a very hard, traction-deficient center section. You can see the wear around the edge—all those elongated "dots" are pretty worn, with some practically gone. I tended to wear alternatives where I needed meaningful traction because the center section is less than ideal on wet rocks—though the outer section has good traction. 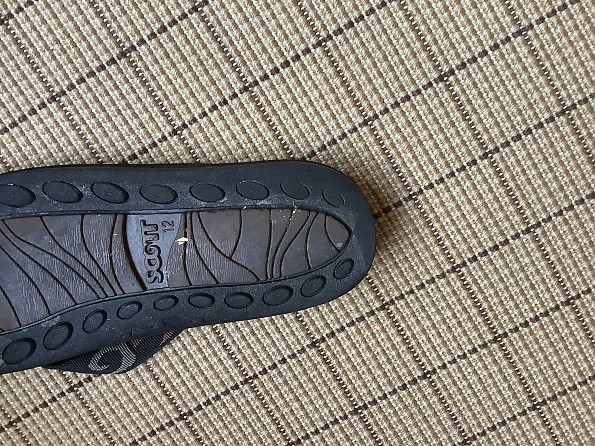 The new pair has a more shallow tread pattern, but the entire sole is made from a reasonably soft and moderately sticky rubbery material. They are probably a better bet for traction, though I haven’t had much opportunity to test that yet, except on wet pavement and in some mud. Definitely an improvement, but the new sole’s traction isn’t at the same level as some more expensive competitors. I'll be interested to see how well these wear. 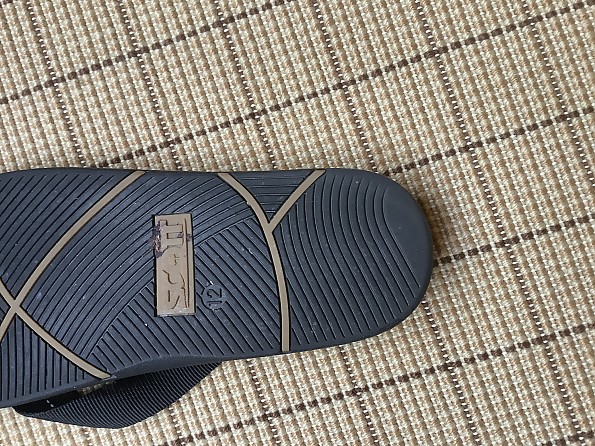 Outstanding, particularly for the price. Though I’m not an all-day, every day flip wearer and am much more likely to wear through a pair of water sandals, these will clearly replace many pair of cheap flips and rival the most robust competitors out there. It took about twelve years to incur the wear on the soles documented above, wearing them as one of my go-to flip flops. Chaco's flip ecotreads, which I wore about as often, show less wear on the soles.

HOW I HAVE WORN THEM

Both older pairs were equal opportunity options with Chaco‘s now-discontinued flip ecotreads, so I have roughly thirty years of experience walking around in the predecessor Scott flip flops, wearing them on docks and in canoes, going to restaurants, on the beach, and so on. I have had the newest pair for about three weeks and took them on a couple of three mile walks on flat dirt trails by a nearby river, in addition to wearing them all day on multiple occasions because no one can see your footwear on a zoom conference call! 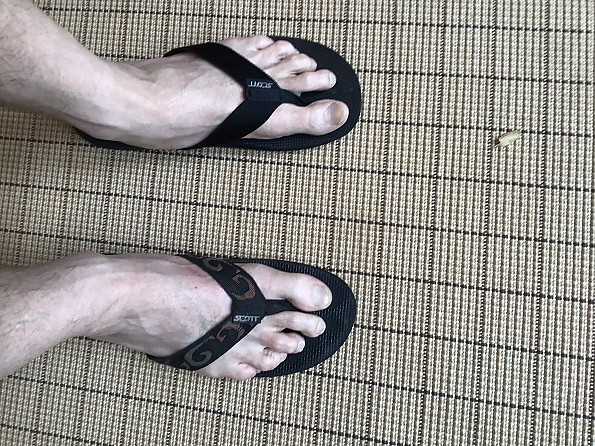 Outstanding. While Scott flip flops may not be the top of the heap in terms of fit, support, and traction, they are readily available for a fair bit less money than some of the competing flip flops i mentioned in this review—less than half the price of many OluKai flips, and nearly twenty bucks less than Chaco’s sale-priced flip ecotread replacement, the Playa Pro (which is getting very mixed reviews on Chaco’s own website). I don’t have recent experience with Reef flip flops and none with Teva, other than looking at their options during the shopping process that led me back to the same brand I already knew.

I like having comfortable beater flip flops after years of misspent youth wrecking five dollar drug store flip flops, a "wear them anywhere" casual option that is far more comfortable to wear than the five dollar throw-aways and that can go from the beach to river to restaurant, and these have proved to be a very good option for that. They’re simple, comfortable, relatively inexpensive, and bombproof (both my older pair had some puppy encounters. They are tough, but they aren’t chew toys!).

Three weeks with the new pair, thirty years with two prior models of the same flip-flop.

The Scott Hawaii Makaha slipper is perfect for Hawaii living. Quality construction and with the simple color combo that I appreciate. My previous pair lasted three years of everyday wearing. Also, the toe edge does not stick out very far beyond my toes which greatly decreases tripping potential!

I have been looking for a simple black slipper with a white arch layer in all the regular surf shops for two months and the ONLY company that had EXACTLY what I wanted was right here in Hawaii (I live on Maui). I got them within four days and love the style and fit. So easy!!

I live in slippers in Hawaii. They have to be durable—not slippery on the soles—and handsome enough to occasionally wear to go out in. There are lots of good brands but Scott is right up there and the money stays in Hawaii! 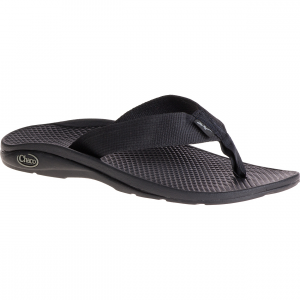 Trailspace's community of gear reviewers has field-tested and rated the top flip-flops. 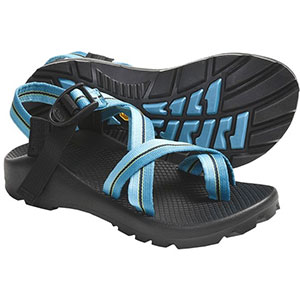