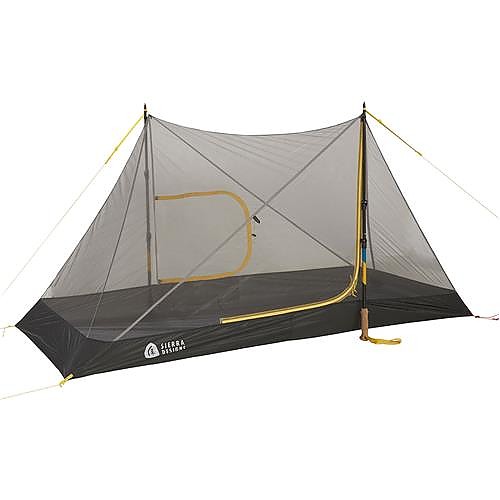 The High Route tent is a light tent that is designed to be stable in nasty weather and offers plenty of headroom. It's not intuitive to set up, but with practice it becomes straightforward.

The Sierra Designs High Route 1 FL tent, a collaboration between long-distance hiker Andrew Skurka and Sierra Designs, has been highly anticipated over the last couple of years of development. I believe Sierra Designs is one of the most innovative mainstream outdoor companies there is, consistently coming up with new ways to solve old problems having to do with balancing weight, function and cost.

Andrew Skurka is a professional backpacker who has hiked thousands of miles, including the 6,875-mile Great Western Loop and the 7,778-mile Sea-to-Sea Route. Together, I thought they could come up with a unique design that would be lighter than other Sierra Design tents, a cinch to set up and be rock solid. 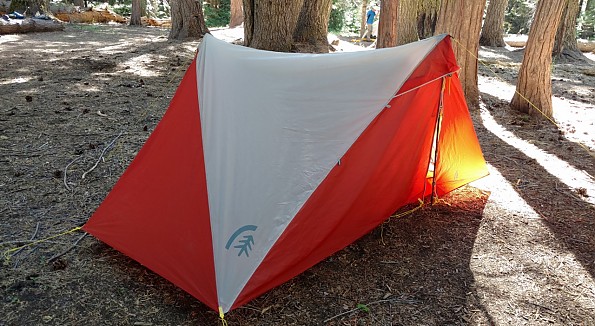 They succeeded on a number of fronts. The High Route tent is unique. I’ve never seen anything quite like it. It’s not a cinch to set up and it’s not lighter than my personal gold standard for a solo tent, the Sierra Designs Tensegrity. It is purported to be very reliable in extreme conditions, such as high wind.

The non-freestanding pyramid-inspired design is basically a tarp with an optional “bug nest” inside. Picture a tarp that uses two trekking poles for support and has no bottom. Then envision a rectangular box comprised of netting and a solid nylon bottom that is suspended from the ceiling of the tarp. The suspended nest is big enough for a full size sleeping pad. When erected, the tent reminds me a little of a circus tent.

Though the tent took some practice, including several tours through the instructional video, it went up without any major issues in the field. It’s fussier to set up than other tents I’ve owned so I ended up not connecting the four loops inside because I was tired of fiddling with guy lines, angles, and the trekking poles. I was able to sit up without hitting my head and it didn’t feel claustrophobic inside, though I missed the window views of my Tensegrity. Unfortunately, I haven’t experienced any severe weather yet so I’ll have to update this review if I can test that aspect.

I liked having two doors, which is a nice feature in a one-person tent. This allows easy entry on one side and potential access to gear storage on the other. The doors can be rigged up to be open to the world but it takes a little effort and probably isn’t worth doing for both doors unless there is a need for a lot of ventilation. Ventilation was not a problem on my field test but the weather was balmy.

There is a good amount of storage space inside the fly, though anything outside of the nest will be sitting on the ground which could potentially flood in a serious storm. This is the same as other tents with gear closets but it felt like I had less “protected” room inside the nest compared to other tents.

I was disappointed that the weight wasn’t lighter than my Tensegrity. The High Route came in at 2 lbs, 10 7/8 oz on my kitchen scale, compared to 2 lbs, 5.5 oz for the Tensegrity and was much more bulky in the stuff sack. When I’m solo, I need gear that is both lightweight and compact and the High Route is about as bulky as the two-person tent I share with my husband. 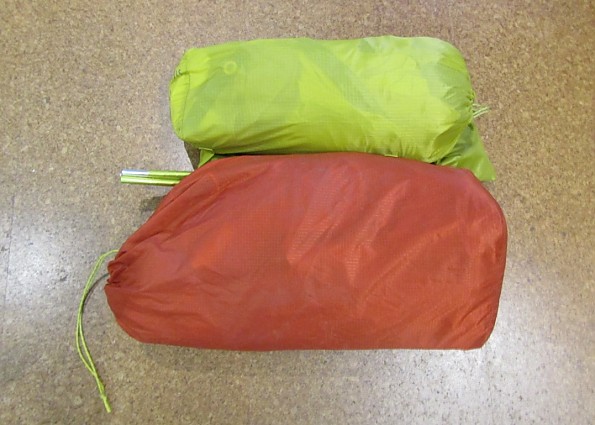 The tent is not as perfect as I had hoped with the collaboration between Sierra Designs and Andrew Skurka, and Skurka himself has addressed some of the shortfalls in this article, “Imperfections: A self-critique of the Sierra Designs High Route Tent.”

After taking the tent out of the box, I kept fluffing up the material, trying to make sense of the shape. It’s a game my husband and I play. We like to set up the tent right out of the package without reading the instructions, just to see how intuitive and easy it is to set up. Forget it. With the High Route, preparation and pre-study is mandatory. It is strongly recommended that Skurka’s pitching video on the Sierra Designs website be viewed before attempting to set up the tent. I set it up three times before I took it into the woods, just to be sure I could remember all the nuances.

Unlike a traditional tent, where the tent is set up first and then the fly is attached over it, the High Route requires that the outer tarp (analogous to the fly) be pitched first and then the nest (sometimes referred to as the tent body) is suspended from the top. I’m going to go into detail because it was very confusing the first time around.

The tent is rectangular but it got confusing as to how to orient it until I ascertained where the doors were supposed to be. There are two doors on either side so when the rectangle was set up, the zippered doors wer in the middle of both of the long sides of the rectangle. I made sure the zippers were closed and the plastic buckles secured. It helped me orient the tent properly when I realized that the two white triangular pieces of fabric formed opposing corners. 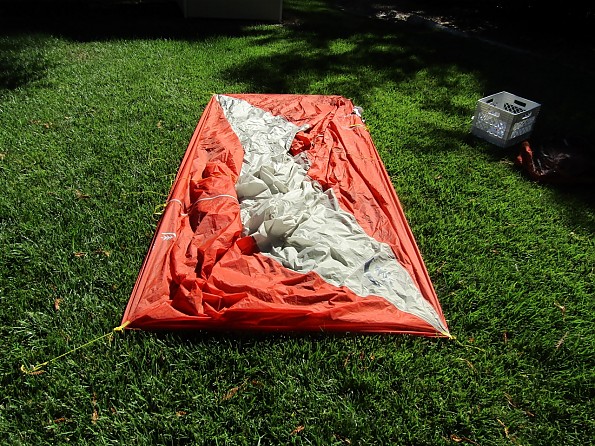 Skurka emphasizes the importance of making sure that the angles are correct before proceeding to stake the tent out. I can attest to the importance because the first time I was sloppy about it and the tent was impossible to erect properly. So, I got my protractor out (just kidding) and made certain that the corners were exactly 90 degrees and the guy lines were 45 degrees from the corner. I then staked out the four corners.

The next step was to erect the tent. This required some agility the first time because I couldn’t see what was going on inside. I got the trekking poles ready by extending them to 48 inches (120 cm), though I ended up extending them further. I unzipped one of the doors but left the plastic buckle clipped. I slipped the trekking pole inside and felt around the ceiling, right above the zipper. There was a little pocket that received the blunt end of the trekking pole. The sharp end went into a grommet at the bottom of the zipper on a small piece of webbing. There were two Velcro cuffs that helped secure the pole.  I had to crawl inside the tent the first time to see where everything needed to go because it wasn’t making sense from looking at it from the outside. 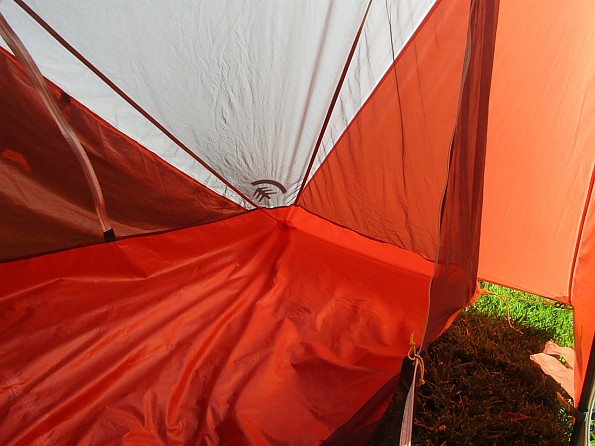 Now that the outside of the tent was erected, I installed the nest. I placed the nest inside and located the four hooks, one on each corner. I slipped the hook into the four corners of the fly. This step is optional—once the sleeping pad is inside the nest it provides some structure. Next, I clipped the yellow buckles on top of the nest into the receiving end on the ceiling, located near the trekking poles. This was an exciting event the first time because I could finally see how the nest worked. Before that, I couldn’t visualize how the nest fit in.

The door can be staked out to provide ventilation or it can be zipped shut in stormy weather but I left it unstaked because I was worn out from so much fiddling around. There are extra tie-out loops and cord in case the tent needs to be further secured against wind.

It comes with 8 stakes and 6 are required. If windy conditions are expected, bring all 8.

The Sierra Designs High Route 1 FL is a tent that is best suited to the serious backpacker who may encounter severe weather. The tent is designed to be stable in nasty weather. It’s relatively light but not as light as other Sierra Designs tents. It has good headroom and does not feel claustrophobic. With some practice it can be relatively straightforward to set up, but is not as intuitive out of the box as many other tents I’ve tested.

I consdidered giving it 3 stars but in the end, the tent performed well once I mastered the setup. I don't think tents should be that challenging to figure out, so I took a half star off for each of the issues noted: non-intuitive setup, small space inside the nest, and the bulk of the packed tent.

Nice review, Inga. Thanks for explaining the intricacies of setup. I'm wondering, to whom (if anyone) would you recommend this tent?

Skurka talks a lot about wind and how stable the tent is in wind. There's a video on the Sierra Designs website that shows how well the tent performs in a wind tunnel. For the backpacker who expects to backpack in areas of high wind and desires a tent that won't collapse in extreme conditions, this might be the ideal tent.

Nice review of this tent Inga, the tent seems like an excellent choice for the TGO. Probably a bit of overkill for most of my weekend trips. I hope SD takes the design and modifies it with the lighter weight (also less waterproof) fabrics others are using (BA, Nemo, etc), they're no bomb-proof but well-suited for the milder conditions most tent users experience, it would drop a lot of the "adventure" weight this thing has packed in.

I don't know if I'd want to give up waterproofness but I agree about using lighter weight materials. It seems like there were some bells and whistles that could go. It's a one person tent so are two doors necessary? The four hooks for the nest could probably go since the nest stays put once a pad and bag is inserted. The tent is fussy to put up, which wouldn't bother the UL crowd but it's too heavy to satisfy that group.

So to confirm: you did not use it in significant rain nor high winds but yet think it should be fine. Okay, whatever. In addition, you compare it to the Tensegity in terms of weight which (for what it is worth is absolutely horrible in the wind - I had one), is lighter but is also single walled. If you do that then the HR1 weight is comparatively amazing given for an additional 5 oz you get a double walled shelter. I don't own the HR1 but it seems to me that the shelter should have been tested on, you know, High Routes.

It's a fair point. I have used the High Route tent a couple of times since this was published but unfortunately for testing, I still did not experience high winds or rain. Given that this is not my favorite tent, it's hard to get motivated to keep using it. I've had the Tensegrity out in very high wind and as long as the tent was staked well, I had no problems. My Tensegrity remains my go-to tent when I'm out solo, as it has for several years.