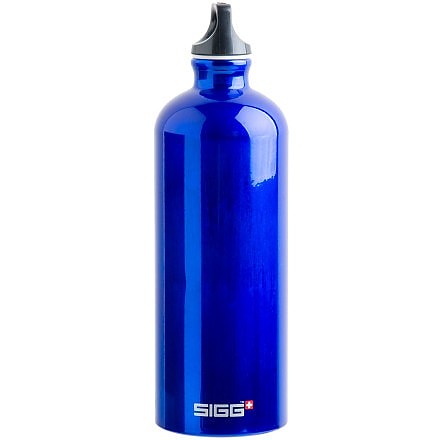 Before they made drink containers, Sigg were a market leader in fuel carriers.  The leakproof qualities were revelatory, when many people would carry Coleman fuel in the purchase tin, methylated spirits in a thin plastic bottle and kerosene, in whatever old can was available.  Leaky, smelly, and flammable backpacks were a not-uncommon sight, which meant that Sigg bottles were eagerly adopted in the UK when they became available, in the '70s, I believe.

Water bottles made of plastic often imparted an unpleasant smell and taste to the contents. I knew folks who would carry a fragile glass Thermos, simply because the vacuum bottle was neutral, in this respect. Just as racing cyclists had used alloy bottles in the '40s and '50s, many British backpackers used the non-lined Sigg bottles for drinking, as well as for fuel storage. They eagerly adopted the coated bottles, when they appeared here, in 1980.

I bought my blue anodised bottle (anodising and pretty colours were a new thing, too) in 1982 and promptly dropped it—full of water—on its head, the first time I took it out of the house. The shoulder of the bottle was deformed by the impact—the first of many blows and dings. The functioning of the canister was unimpaired and remains so, to this day.

The advent and further development of the odour-free plastic bottle made Siggs look like a luxury option. Concerns about the health risks surrounding aluminium and further BPA worries concerning the washer, stopper, and coating have encouraged consumers to look elsewhere for drinks carriers.  This does not make the Sigg redundant, in my experience.

As a carrier for cooking oil for a group expedition, a Sigg works great. My wife used hers for keeping massage oils for many years. It'll keep your quick-boil rice dry for the whole two weeks also.

I bought a wide-mouth Nalgene in 2001 and a BPA-free example in 2008. The Sigg gets used as a nostalgia trip now and again, representing a time in my life when I made my living teaching outdoor skills. The fuel bottles still get used all the time.

I don't recommend Siggs for drinking anymore. Time moves on. They still do all the things a sealed bottle does though. What left field uses did you find for yours? 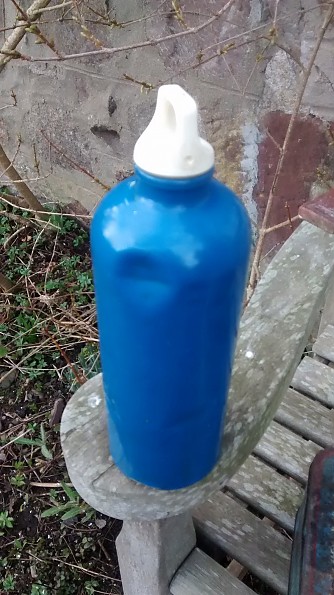 40 years with Sigg products, just a little less with the drinks bottle. For 20 years, my Siggs were used relentlessly on bike tours, on two- and three-week hikes, on mountain expeditions, and at work teaching kids the backwoods basics.

Source: bought it new
Price Paid: Too long ago to remember...

Lightweight water bottle, does not affect the flavor of the water.

First off, I am very picky about the taste of water. That may be weird, but I just really enjoy the taste of clean, crisp, and pure water. I used to use plastic Nalgene bottles but always found the bottle changed the flavor of the water a bit. Forget water bladders, they make water taste real bad in my opinion. That is where Sigg came in.

I bought four aluminum Sigg water bottles about 5 years ago and I haven't looked back. The Sigg aluminum water bottles do not affect the taste of the water at all. I have used my Sigg water bottles extensively over the last 5 years and they are still going strong. They look a little beat up and faded but still function well as they should. They do dent fairly easy, but a few dents just give character in my opinion.

The insulating properties of these bottles are not that great. Cold water turns to lukewarm water fairly quickly in a warm environment. Water will freeze in these bottles very quickly in sub-freezing temps. The bottles have froze up solid on me a few times during cold winter camping trips. Just something to be aware of.

I have put Powerade and even certain adult beverages in these bottles and the bottle never retains any residual flavor from other liquids.

I usually soak mine in hot dishwater for a few minutes and then rinse really well for the next trip.

I will continue to use my Sigg bottles and I highly recommend them if you like the taste of pure water.

I had my SIGG for about 6 months and the liner started to wear and flake off around the thread area (Where the cap screws in). I guess it was due to the wear and tear of opening and closing the cap.

Look closely around your thread area and ensure that none of the aluminum is exposed. The lining is yellow. If you see any silver, that’s aluminum. I have switched to a Laken bottle and it does not have this problem.

I originally bought a black sport top 1.0 liter Sigg in January 2008. I used it religiously until I put it in the freezer in May and it cracked. I realized later—upon reading their site—that was a no-no for a Sigg.

I replaced it since and have had the same excellent experience as my previous one: no bad taste, smell, etc. It's very durable and keeps liquids cool for longer periods of time than plastic. I recommend a sport top as it's much easier to work with versus a screw top. Although the screw top has the advantage of a loop to hook when hiking.

Overall a great choice and alternative to plastic (even the BPA-free kind) because of its durability. The one tricky part is that it dents fairly easy and it can cause less stability. But hey, that's the nature of aluminum!

I have two of these bottles. I originally purchased them to carry beer on camping trips. They worked perfectly for it as they hold pressure and the lining doesn't leave a taste or absorb tastes.

Now I take them to work every day full of water. I take them with me everywhere. I recommend them to anyone who will listen to me.