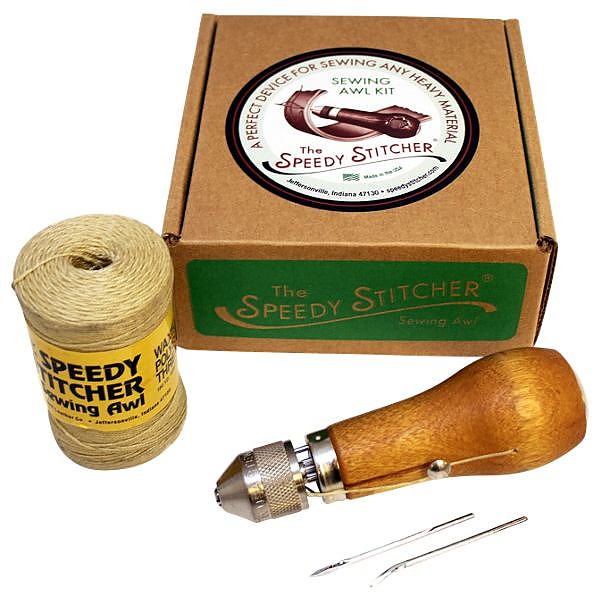 A must-have tool for rough but lasting repairs on all kinds of outdoor gear.

After walking the dog last night I noticed that a seam on the instep of both my running shoes (a variant of the Trail Glove, but I'm not sure the exact model). So I broke out the speedy stitcher and within half an hour had them both ready to run.

Now there's a line of coarse stitching across the affected part of each shoe, and the stitching also goes through the shoes' soft liner, but I'm confident that the repair will hold for most of the rest of the life of the shoes -- beginning with today's 25k trail run.

The Speedy Stitcher is a sewing awl that takes a couple different kinds of big needles and a spool of heavy waxed thread hidden in the wooden handle for simple, lock-stitch repairs. The thread feeds up through a hole and along a groove in the needle, and the basic method is easy to learn. With the help of the classic wooden handle the sharp needles can be forced through heavy leather or multiple layers of fabric.

The needles also hide away inside the tool so that it's completely self-contained and maybe worth carrying on backcountry journeys where fast, heavy-duty repairs might become necessary. (We bought ours shortly after we got our Klepper folding kayak, which has a hypalon and canvas skin, but as it turns out we haven't had to do any big repairs on it).

Here's a shot ("borrowed" from this website) that shows the basic setup:

Here's a look at the repair process: 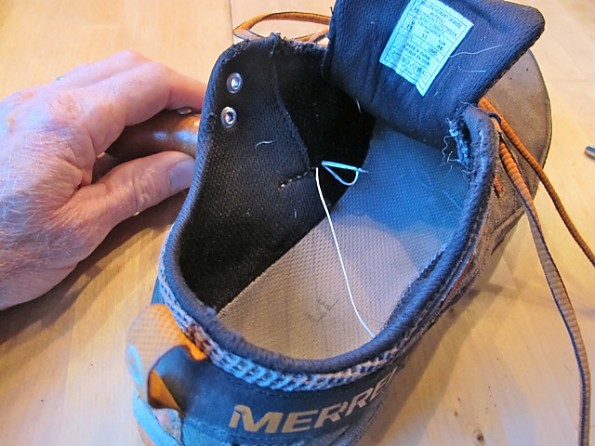 You begin by pushing the needle in and then pulling free end of the thread through to the inside of the shoe. Pull the needle out, move it up for the next stitch and push it through, then back it up a little so that the thread forms a loop (picture). Pass the free end through the loop then back the needle out and pull on both ends to close and lock the stitch, and on to the next stitch. Just cut and pull the thread through and tie it off when done. So you have to be able to get inside (or to the other side) of your work well enough to see and pass thread through the loop, still possible on the instep of these low-cut shoes. 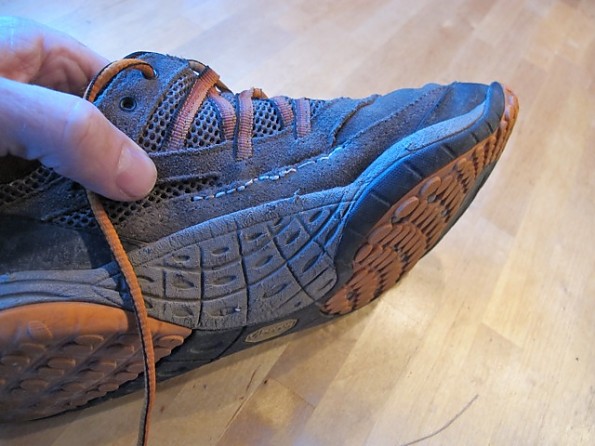 Not pretty, but it'll do, and I guess if I were more in practice it would at least be a little straighter.

Mine is at least 25 years old, and I haul it out every now and then for a heavy duty repair job to keep some old-but-still-good piece of gear going. For example, I have stitched big hypalon patches on the inside of my OR Croc gaiters where my ski edges have torn them up, and put on new neoprene straps while I was at it. Shored up the straps on some old day pack for another couple of years of use -- stuff like that. The repairs aren't always pretty, but they hold.

Back in the '70s I had a North Face Wrapac that had a big piece of leather that anchored the shoulder straps and top pocket to the body of the pack. When I was on trail crew, I tore that leather almost clean through when I had the pack piggybacked on a wooden packframe that was heavily loaded with tools and fell over when I leaned it up against a tree while part of the pack caught on the tree.

I used my dad's Speedy Stitcher to make a coarse, zigzag line of stitching through the leather and pack fabric. It looked like Dr. Frankenstein's work, but that repair held while I took that pack to New Zealand for daily use in two more long seasons of trail work, then on around the world, then overloaded it for about 25 days on the John Muir and High Sierra trails, and then on many more winter and summer day trips in the White and Green Mountains, maybe another 10 years of use.

It's often said and often true that they don't make them like they used to, but Speedy Stitcher does -- this tool hasn't changed a bit for as long as I have known it, and maybe it doesn't need to. I guess I could wish for a little more variety in needle size and thread types, but that would also take away from the tool's simplicity.

I see that I can get alternative (black) thread from other suppliers  at some outlets, and I may have to give that a try. But otherwise the Speedy Stitcher will stay hidden away in my workshop, awaiting its next mission.

Source: bought it new
Price Paid: Way too long ago to remember, but they're still only about 12 bucks.

These things ought to come standard with every newborn child. I've been mending my own gear since I was old enough to destroy things and this tool rocks and lasts a lifetime. I think I stole mine from my dad. I hope he doesn't read this! Great review! 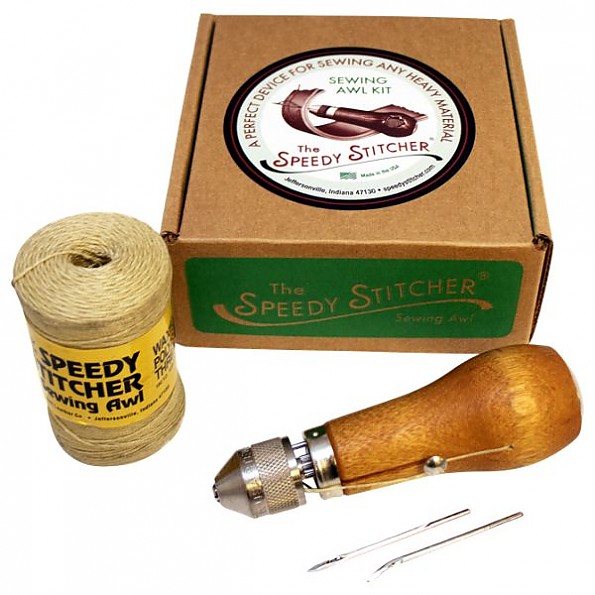 Trailspace's community of gear reviewers has field-tested and rated the top repair kits. 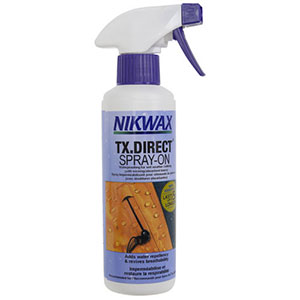 All Gear Care and Maintenance

Find the best gear care/maintenance product for your next outdoor adventure using our independent reviews and ratings.