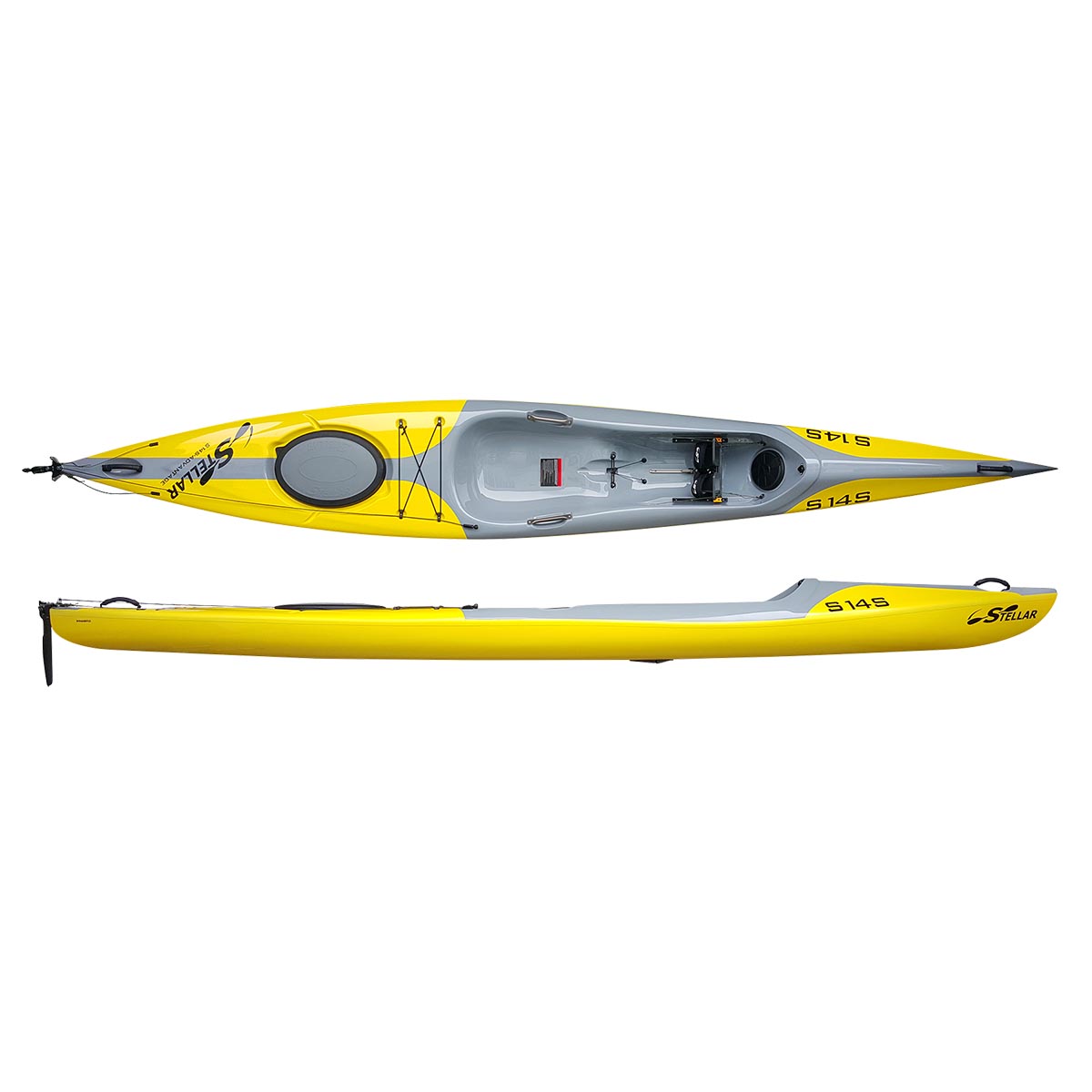 Been wishing for a high performance, lightweight SOT???

Been wishing for a high performance, lightweight SOT??? 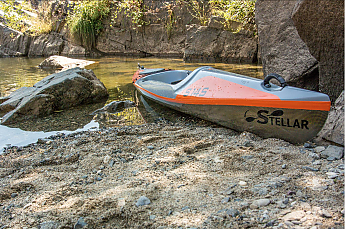 Your wish has been granted. Behold the Stellar S14S.

The Stellar S14S is a hybrid cross between a recreational SOT and a surf ski kayak. It's a composite boat, which means unlike its roto-molded siblings, it's very lightweight not to mention easily repaired. It's also beautiful to look at both on and off the water. Most of all, it's an absolute pleasure to paddle. So what the heck is a surf ski kayak anyway?

Surf ski kayaks have been around since the 1960s but have only gained traction in recent years. Originally designed to surf ocean waves, they have become quite popular with racers, fitness paddlers, and remain popular for surfing too. Full out surf skis are very long and very skinny. In fact, the most advanced models pretty much only stay upright as long as you're paddling them. They have a back end that's flat and darned near at the water line with no storage.  While they may look a bit peculiar to most traditional kayakers, they are ultra sleek and ultra efficient (fast).

Enter Stellar. While a relatively new manufacturer, I believe Stellar produces the finest composite layups obtainable. For those who do not know, composite boats are those built from fiberglass, kevlar, carbon fiber, etc. The advantage of composites is that they are generally stiff, very strong, and very lightweight. They are also very easy to repair, easy to add things to, and good looking.

The strength of composites comes from the fiber cloth and not the resin. The resin simply binds the fibers and any more than enough to saturate the cloth adds only weight, not strength. So it's a delicate balance between too much resin and not enough. I'm happy to say that Stellar has this stuff down to a science and their layups are the best I've ever seen and probably the best obtainable. The craftsmanship that goes into these boats is, well, stellar.

The S14S. It's a balancing act between a surf ski and a recreational SOT, and well balanced it is. It's short and wide for a ski; more like a SOT at 14'4" long and 24.7" wide, but it maintains a ski's hull and deck design. It also includes a small storage compartment fore and a slightly larger one aft. So you get the basic design of a ski with the dimensions of a SOT and some storage.

It's available in four different layups depending on your intended use. For racing, the Ultra layup is full carbon fiber and weighs a whole 26 pounds! Compare that to your plastic 14-footer. However, that layup is pretty much meant to touch nothing but water and costs almost $5000. On the low end is the Advantage layup. It's all fiberglass, still only weighs a respectable 34 pounds, and sells for about half the price.

I went with the Multi-Sport layup which has a fiberglass deck and a carbon fiber-kevlar weave for the hull. While not as stiff as the other layups, it's rated for class II to class III rapids; in other words it's very impact resistant in trade for some stiffness. Since I paddle a lot of rivers and rock gardens, this layup made the most sense for me. I managed to find one on special and got it for the price of the Advantage layup. Finally the Excel comes in at 27 pounds and is a little tougher and cheaper than the Ultra, but it's still not made to hit stuff.

So what's it like? It's like a fantasy. I'd liken it to paddling a leaf. One power stroke and you're up to speed and no one will be able to keep up with you once you're going; even if they're in better shape than you. Well, at least if they're not paddling an equivalent kayak that is. It slices through the water effortlessly. In fact, it bests my 18.5' Seaward Chilco glass sit in, which is saying a lot. Stellar claims it paddles like a much longer boat and they deliver on that promise.

While all of that performance is great, it does come at a cost. This is not a boat for a beginner. A novice would likely flip it over before even getting under way. The S14S will roll from side to side with the slightest body movements, which is not to say it's unstable. I can roll it to one side or the other so far it'll just about begin taking on water without it turning over. It just requires some practice to master it and trust me, it's well worth the time and effort to learn. It took me all of a few months to develop enough skill to be totally comfortable and competent in it.

The S14S has a footboard instead of foot pegs, which is exactly what it sounds like. I find this infinitely more comfortable than pegs and it promotes a better paddling technique. The footboard is made of carbon fiber, is fully adjustable, and solid as a rock thanks to its' three anchor points. Push as hard as you like on it; it's not going anywhere and has no give or play.

The seating area, referred to as the bucket, is actually very comfortable; much more so than it looks like it would be. While you can add a back strap or even a traditional SOT seat, I have found no need for it; and I routinely spend entire days on the water covering 25-35 miles.

The S14S has a deployable, stern mounted rudder and actually does need it. The kayak will wander without it, especially in moving water. The spring loaded deployment mechanism works great. It's worth mentioning that it doesn't flip completely over like most flip type rudder systems. Instead it only lifts up a little over 90 degrees from the water sticking straight out and away from the back of the kayak. While this does look a little odd I've found no problem with it. The rudder's toe controls on the footboard are smooth and precise, and with the rudder deployed the S14S tracks perfectly and turns on a dime.

Surf skis do not have self draining scupper holes and the S14S is no different. It has a bailer instead. It's conveniently located on the floor within easy reach and all you do is pull it open while you're paddling at a reasonable pace; just don't open it while stationary or you'll take on water. Once it's opened the water is literally sucked out due to the bailer's venturi action. It takes a few trips to get used to, but works great once you do. The seat bucket on the other hand will fill with water and you will find yourself sitting in a puddle. For this I carry a kayak sponge and simply bail it out the old fashioned way.

It has handles on the bow and stern as well as sturdy handles on the sides mounted at the boat's center of balance. I often get strange looks as I effortlessly lift it out of the water like a suitcase and walk off with it. There's a bottle holder with a bungie to keep the bottle in place. There are bungie cords on the stern liken to sea kayaks. There's a small hatch in the front to access the inside of the bow and a normal sized hatch in back to access the stern stowage. Both hatches are of the Tupperware variety and are completely water tight. The internal storage space is very limited, particularly on the Multi-Sport layup. I can get a week's camping supplies in there but it does require creativity; and all of my gear is of the ultra light, ultra compact back-packing variety.

So that's about it. While it isn't rich in features, it is rich in performance. It's a boat for people who want to go. It's not a fishing kayak. It's not a touring kayak. It's an easy to transport speed and distance demon that'll leave your friends in the dust; unless they have one too. It's also a total blast to paddle and it'll put a smile on your face. Yes, it's expensive and takes some time to master, but it's worth every penny and hour spent... and then some.

I've been kayaking for many years. Kayaks are one of the most specialized water craft on the planet. I own and have owned all kinds of roto-molded, thermo-molded, and composite kayaks. I currently and probably always will own a Stellar S14S. I've had it for a little over a year now and love it more every time I use it. While I may consider an S18S in the future, I'm sure I'll keep my S14S for those wild river runs.

Thanks for another helpful kayak review, Wade, and for being the first to review a boat from this brand. Your reviews and pictures are putting me in the mood to paddle!

Awesome. Get on out there!

I might have to wait for the rest of the ice to get out first.

I can see the problem. Out here in Northern California were blessed with year round access; though you do need the proper clothing in winter.

I really appreciate your thorough and detailed review, as I am considering purchasing one of these soon. Thanks for taking the time to write this. I am also in Northern California, and paddle mostly for fitness (am Eddyline Sandpiper). Hopefully I won't have too much trouble staying upright, as the water here is getting pretty chilly...

I'm glad (but not surprised) that Wade's review has been helpful, Dave! Good luck on the kayak purchase decision.

Dave, we'd love to read about your experience with the Eddyline Sandpiper in a review too: https://www.trailspace.com/gear/eddyline/sandpiper-130/

Thanks for the kind words Dave. I'm happy to meet somewhere and let you demo my boat; we both being in Northern California and everything.