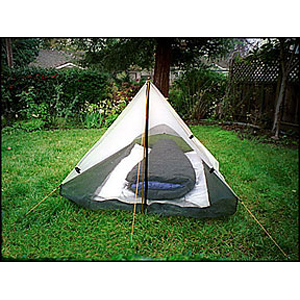 This is the 2nd generation Virga without floor or extended beak. Design is quite elegant. I think Henry Shires has this design (or one similar) available on his website although he no longer makes/markets the product.

This is one of three solo shelters I own (the other two are an OR Basic Bivy and a MSR Hubba.) It is the lightest of the three. I use it with a kite-weight Tyvek "floor"/footprint (I think originally ordered with the tent). Perimeter mesh works well. Front zipper door and the beak is adequate. This tent sets up very easily if you follow the instructions and quickly. It can be set up in a wind much easier than most 2 wall tents or even a tarp. Weight is only in the neighborhood of 18 oz. if memory serves.

It is not idiot proof. Fail to take into account water flow at your bivouac if it starts raining or do a bad job of guessing wind direction and you may have trouble. In the first case you'll be in water. In the second you will probably be okay, but may have rain blowing in the front. As with any shelter, you should augment the quality of your bivouac by making intelligent use of natural shelter.

Henry went off towards higher weights after this design. Maybe he is reeling that back in now. As noted, it is an elegant minimalist shelter. Preferred set up is with a trekking pole for the front and leave the included front pole at home.

Interior room is adequate. Like most single wall tents you can get condensation in the right environment, but the ventilation is quite good. If you roll all over in the night you bang the wall and get water on your bag. I've never had a problem though. An overlooked benefit of a single wall tent is that there is no floor to keep clean or try futilely to sweep out.

This review applies to the Tarptent Virga of about 2002 vintage; the newer Virga 2 looks to have more headroom and a slightly larger sewn-in floor (optional).

I got the tent with the optional, sewn-in floor. There are no real vestibule and no interior gear-pockets. However, the extended "beak" has kept my boots/shoes dry; I park the backpack outside with its raincover over it; and I use a collapsible dog-bowl (2 oz.) to hold small items (glasses, flashlight, etc.). I would never cook in a tent or its vestibule, so that is not a consideration for me.

I've used my Tarptent Virga for three seasons now and have found it to be as promised: spacious, dry (no condensation and no rain problems), and incredibly lightweight for all the room you get.

I've simply been amazed at its performance. I was so certain that such apparently flimsy a product couldn't stand up to wind and rain, but danged if it hasn't done vastly better than my Eureka! Zeus Exo 1 for about half the weight. I've tried several bivy sacks and one-person tents, and the Virga is THE WINNER by a long shot.

For a late-season backpack last year, I took my Bibler Bipod Bivy instead of the Virga, imagining I'd be warmer in the bivy. Wrong -- and for me, after the Virga, the bivy was quite claustrophobic. (If you need extra warmth, loosely drape an unfolded 2-oz. metallized-mylar emergency blanket over your sleeping bag. This will reflect some heat back onto your bag with little condensation.)

Earlier in the year, I had hastily pitched the tent near the end of a couple hours of steady rain and had spent a comfortable night in it. Packing up in the morning, I discovered to my astonishment that I had pitched it right over a long, narrow, deep puddle. The underside of the floor was wet, but the inside and I had been dry.

I did manage to break the curved rear pole once by bending it too much and too hard, but Henry Shires (Tarptent's founder) promptly replaced it, and it's been fine since. (Since I'm a small, older woman with weak hands, I tend to assume I CAN'T overstress poles, and then, surprise!, I DO.)

Shires' support for his products is outstanding. You'll get timely, personal responses to your inquiries.

The unaltered floor is very slippery, but some silicone "lines" on the floor and on my sleeping pad fixed that (Shires' advice, not my idea).

If I were in the market for a new backpacking tent for 1 to 3 people, a Tarptent would be at the top of my list. They're available directly from the maker at www.tarptent.com. I don't believe they are retailed.

FYI, I backpack almost exclusively in California's Sierra Nevada, which is not nearly as rain-free as some people imagine.

Design: Three-season, ultralight, not freestanding, modified A-frame shape
Sleeps: 1
Ease of Setup: A tad awkward for me. Maybe I'm doing it wrong. I try to keep the front pole up while I pitch out the rest; I think this coming season, I'll try staking out the body BEFORE I put in the front pole. Why didn't I think of this sooner?
Weight: 1.5 lb. (24 oz.) minimum, plus 6 oz. for sewn-in floor
Price Paid: About $175 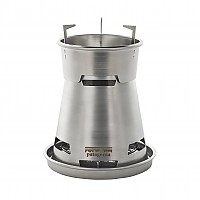