To be clear: this is about the pre-2019 pack. The picture here is the 2019 version. It is made in Bulgaria and currently costs 112 euros.

This is a multipart review. First, I will discuss the pack as is. But I will also go into what could be improved on pretty standard packs like this. Finally, I will briefly address some adaptations I already made or intend to make.

A bit more context. I have a faithful 15-years-old Lowe Alpine Alpamayo 80+20. It is very robust, but also quite heavy: 2,7 kilograms. I mainly use it carrying a week's groceries. For winter trekkings it disturbed me being so heavy, but a much lighter pack of 45-55 litres was too squeezy.

I seized the opportunity to buy this pack, secondhand but unused, even though some details were not to my liking. I considered buying a new Tashev model as they are pretty cheap. But my main objection had not changed. Basically it seemed a good pack, and by how I bought it, it was even cheaper. So it enabled me to just try it out, and maybe turn it into a project, as I tend to adapt gear.

I have used it during one winter trekking and one a bit rainy training, after which I left it out in the rain some more. This pack falls into a category of large packs with mostly standard features, as you can see on the pictures.

The back length is adjustable, the main compartment can be divided and has an extra zipped entry, it has two top pockets in the lid and an extra made of webbing underneath, it has a drinking pouch inside with a port and a outside clip, one axe loop, thump loops, an extra handle on the front, pouches on the sides and on the belt, stabilisation at the top and sides, compression straps on the sides, back, and front, a draw cord on top, two elastic straps for poles or an axe, various eyes for attachment, a clip for the loose end of the hip belt, some gimmicks to tuck away the various compression straps, and two sort of key cords in the two top pockets. 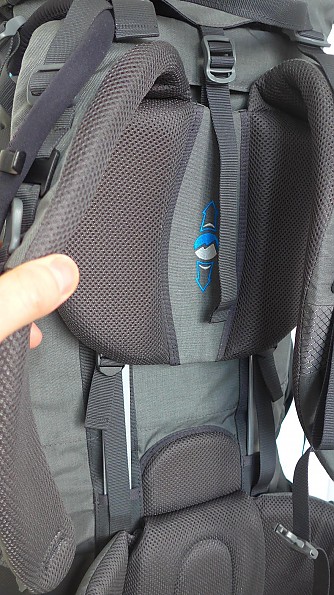 My pack was a bit heavier than the current version: 2,2 kilograms.

On the positive side.

On the minus side.

There are some aspects of this standard model, and trends in general, that I regret.

I have started some adaptation, as you would expect  from above list. It was just aimed at first use. I will not go into all the details.

I intend to do some more adaptation. If ever, I will report here.

Good luck with the pack medications, Capricorn. Out of curiosity, how much did you pay for it secondhand?